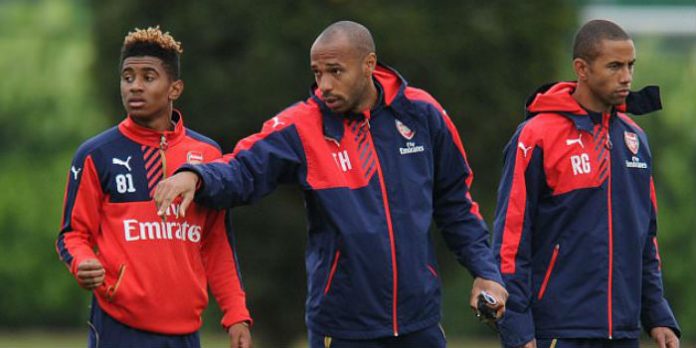 Andries Jonker says he’s been impressed by Thierry Henry’s commitment to educating Arsenal’s youngsters noting the Frenchman is going above and beyond what is required to acquire his UEFA coaching badges.

The Gunners record goalscorer has been working at London Colney since the summer and was in the dugout on Tuesday alongside fellow coach Ryan Garry to watch Alex Iwobi net a brace for the under-19s that downed Bayern Munich in the UEFA Youth League.

After the match Jonker, who watched on with pride as the Academy side made it three wins out of three in Europe this season, spoke to the Guardian’s Amy Lawrence about Henry’s formative steps as a trainer.

“Thierry’s own wish is to be at Arsenal five, six, seven days a week,” said the Dutch Academy head.

“It’s his own ambition to invest in his own future as a coach. What I am recognising is a guy who had a brilliant career as a player that is able to transfer his knowledge and experience to the boys. And the most important thing is he is willing to do it.

“That’s why he is very welcome with us and that’s why I invited him to be with this staff, to get experience as a coach and to be on the other side.

“He is doing much more than he is supposed to do in order to get his coaching badge. It’s his wish, his desire. We didn’t have to ask anything. It was his request to Wenger: ‘I’d like to be in the academy, is there any possibility? I just want to help.’

“I started to work with him and found out how committed he is. He is really, really motivated to developing himself as a coach.

“He is open, he is internationally orientated, and he is a really good guy. Thierry is young, Ryan Garry, Jason Brown – I have very young staff. I let them do many things and I try to give them feedback.”

Jonker, who is in his second year at Arsenal, also took the time to big up the crop of youngsters coming through the ranks.

“We are very aware we have fantastic players in this age group,” he told Arsenal Player. ”We had a couple of players playing in the Under-17 World Cup [Kaylen Hinds, Chris Willock & Jeff Reine-Adelaide] so we know we have a good team.

“Academy work is the work of years and years so I’m not the one who has done this I’m just trying to help them make steps. I think at the moment with this age group we have a really good group.

“You can see quite well how many players we have. One 15-year-old boy [Reiss Nelson] up front and nobody is seeing the difference. We have good players who can handle this level and that is a good feeling.”
__

Visit The Guardian for Amy’s full piece, including how teenager Alex Iwobi is taking on Henry’s advice.

I grew up with Thierry as my hero. I thought I would grow out of having a hero who is a footballer. Now I’ve accepted he will always be my hero.

I know what you mean, bro. I began ‘supporting’ Arsenal from Australia when I was about five. I have no idea what attracted me to them, considering I had never watched a full game of football. My first *real* memory is perhaps turning on the television one morning and seeing Thierry slotting it past Casillas, when I was eight. In my youth and location (first Australia and then Singapore), I doubt I saw Thierry play ten full games before he left for Barca. But what memories he left me with – the header against United at the Emirates, the winner… Read more »

Pomegranate
Reply to  Keeping it MonREAL

Same here. I remember that volley against the mancs, that left Barthez looking like some bush league amateur. Fabulous stuff.

Henry has more reliable and durable fanbase than Zidane and others. Nobody even remembers of Nilsteroy, Owen etc.

Love me some Henry. Exciting to see where this goes and can’t but help think how motivated the young players will be with him as a trainer

That would be a dream combo. I think Le god will probably be a better coach though.

First he must quit his job as pundit because being around the likes of Owen is bad for your IQ.

In fairness Owen is on BT Sport and Henry is on Sky Sports. But the point stands, he is around Jamie Redknapp and Jamie Carragher day in, day out.

I tend to get them mixed up. Must be because their monologues are of similar quality.

You forgot Graeme Souness. If Henry is to become a great manager, he should be around Souness.

Veering slightly of topic here, but did we not announce some kind of partnership with bt sports last year? I remember hoping it was a loan agreement for Adrian Clarke to replace Michael Owen.

Legend as a player, hope he becomes a legend as coach!

Isn’t Stephy Mavididi also playing in the u-17 World Cup?

Ryan Garry was a pretty good option on Champ 03/04. I hope his coaching skills reflect a tenth of mine in that game