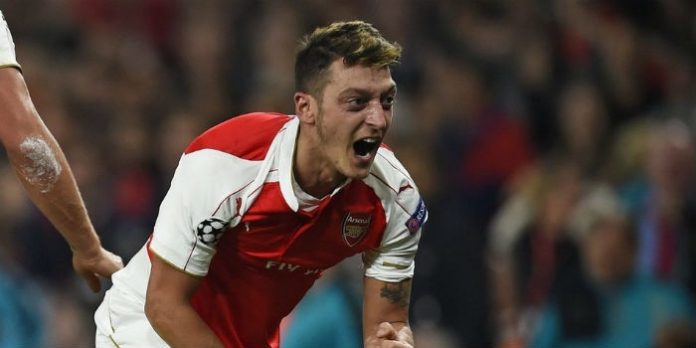 Mesut Ozil says he’s pleased with his performances in recent weeks and happy that Arsenal’s win against Bayern Munich gives them a fighting chance of qualifying from Champions League Group F.

The midfielder, who turned 27 last week, delivered an impressively disciplined performance that culminated with a dramatic stoppage time strike that just creeped over the line despite the best efforts of Manuel Nueur.

The goal not only sealed the Gunners’ 2-0 win but also afforded Ozil the chance to indulge in  a joke at the expense of compatriot Thomas Muller who’d five days earlier wished Ozil a happy birthday on Twitter while promising there’d be ‘no present’ delivered at the Emirates.

“I’m really satisfied with my performances,” Ozil told Arsenal Player after the match. “I’m on a good way, I feel at ease and you can see that the team and the manager give me their trust.

“[For my goal] I had a shot at goal and Manuel saved it brilliantly. After two or three seconds I saw that the referee was signalling a goal and I was relieved. It was clear that we had won the game at that point and I’m pleased with that.”

Ozil also reflected on the performance as a whole claiming the Gunners deserved the three points on an evening of breathtaking football.

“To win against Bayern Munich is really hard,” he continued.  “We knew that it would be a tough game but you could see during the match that we created a lot of opportunities, especially in the first half, when Manuel Neuer made some superb saves.

“But ultimately I think we deserved to win. They had more possession but we had the clearer chances and that’s why we’re really pleased to have got the three points today.

“We concentrated from the first minute until the last minute. We believed in ourselves and we knew that we had made massive mistakes in the first two games.

“Today was our last chance – we had to win. We did that and now we’re back in the game. We’re all the happier for that.

“We showed heart and the fans supported us superbly. The most important thing is the three points. We have to believe in ourselves, keep working hard and then we’ll be on a good path.”

Ozil now has two goals and six assists to his name this season. Not bad for a chap who is nicking a living.

Ozillin’ in the name of!

I like the way you changed your name in shame but not enough shame to not leave out your old name completely.

Haha, replied on my phone forgot it was another (sort of) name! Shinfo.

I was with ya, but your ‘doo doos’ were a bit off rhythm.

What a player he is! The media would have you believe he disappears in big games but he’s showing them what he’s about. After we signed him we’ve started winning silverware, it’s no coincidence.

Itching to buy his Jersey . But past experiences made me superstitious..! 🙁
Bought Kos jersey couple of years back..and he got injured long term. Same happened when I bought Wilshere’s #19. Last year it was Rosicky now he is not even there to be seen!
This man is playing his best football ever in an Arsenal shirt. Just don’t wanna ruin it! Keep going Oziiii… I am not gonna stop you! I will get yours when you finally retire with us..

Please oh please do not buy his or any arsenal jersey until June 10th. thanks

Haven’t you always wanted a Kompany jersey though?

He is happy as he is now adding some goals. But make no mistake nothing give him absolutely ecstacy than feeding those delicous through balls to sanchez ,Walcott and co to score.

Happy belated Bday to you Wizard of Ozil. He’s on a streak and long may it continue. He also looks very happy atm especially with his position and the license to roam as needed. To think Owen said the headless chicken impersonator Sterling was better than our WC winner smh. A draw at Munich + revenge on the Dynamo & Olympiacos and its on like donkey kong
COYG

hey boys, same game plan next game against these guys. Let them make all the passes, we’ll just score the goals.

Didn’t we win the last 2 trips to Munich?

Holic
Reply to  AS17

I remember poldi smashing one thru neuer #aha

A rocket from out wide and out of the blue. Oh yes, the famous Podolski Canon!

Great work from Ozil throughout.. Especially in stepping up to his defensive duties.. He’s beginning to expand his skillset. Now scoring regularly and putting in a good defensive shift too.

All the gooners are happy with your consistency and impact on big matches.I am wondering what the so called experts point out now as your weakness. Tough time for them.You keep proving them wrong and keep gooners happy. #YaÖzYa

That’s easy…Ozil’s weakness is that he does all that without looking like he’s about to die of a heart attack. Here in Britain, that’s what we care about – not so much that you put in the effort but that you LOOK LIKE you’re putting in the effort.

Ozil is lazy because he doesn’t draw attention to how much work he’s doing. You can’t expect the pundits to actually watch the game, you know?

Well said. We’ll have to turn it into an haiku for the lazy unthinking pundits so it’s short enough for them to grasp the truth and beauty.

…and Owen’s thicker than shit

He’s on a roll at the moment – he has such a languid style that some may mistake for laziness, but that’s just the way he plays. I think he relishes having quick runners in front of him and it’s a pleasure to watch him rip open teams like Bayern with one well-placed pass. Keep it up Mesut! Makes me proud to support the team when so much obvious talent is on show. Honourable mention in dispatches goes to Hector, mang. I just wish he’d turn on the afterburners on more occasions as you know he’s got the gas to… Read more »

I bet he really enjoyed being assisted by one of those quick runners. Table turned brilliantly (and he was no slouch getting up there himself either)

Its great to see him delivering, even greater that we fans don’t have to make up excuses to defend him… The first year and half here was stressfull, we can stop all the ‘watch Ozil and see the game’ bullshit. He’s finally delivering.

Ozil is the core, our kpim. He made me re-learn football and what is important in the game.

A Song of Ice and Fire surely refers to Ozil and Alexis respectively.

From being one of his fiercest critics, I now feel much safer with the ball at his feet than with any other player, GK included.

Glad to also see and cohesion and consistency in the team, here’s to hoping Ox slots seamlessly into the 1st team chemistry as Gabriel has managed.

Ozil’s last 4 Arsenal goals
Tottenham(A)
Liverpool(H)
Manchester United(H)
Bayern Munich(H)
I, like most of us, have supported Ozil since his first season. Whilst he struggled earlier in his Arsenal career, now he’s on fire. Top assists in EPL, turning it on against big teams and just being a Boss in every game he plays. If we can keep our midfield of Ozil, Alexis, Coquelin, Cazorla and Ramsey fit for as long as possible. then we can go all the way in any competition.
#COYG

Ozil captures your imagination, What a player we have.

i know this is about ozil but; HECTOR BELLERIN The boy who is goblin made, our sword of gryfindor( he takes in only what makes him stronger). After a torrid first half of football, in which douglas costa thought he has seen a lab rat to experiment his skills on, come 2nd half, hector came in like a roaring lion. costa had the better of him only once in the 2nd half. what a boy, a quick learner, he intercepted the ball from the dude that caused him issues in the first half for the goal. But the run i… Read more »

I watch Ozil play and feel I’m watching someone operating at a higher level. I can’t really compare it to any other player. Watching him in real time you get a sense that he’s just done something incredible but it’s often only with the replay that you understand. Very exciting. I think Wenger has the basis of his third great team

He’s been fantastic but if we were to be super critical he really should have stuck that ball into the corner of the net and the Ox should have buried the rebound from 6 yards out.

I thumbed you up only for your last comment, all those missed chances in the first 5 games of the season.
Sp*rs league cup victory is what changed things. Leicester City followed so forth. Thanks again for your support Sp*rs always there to give us a lift when we needed it.

the funny thing about arsenal fc is that if they beat you, u start losing majority of your remaining matches… we don’t just win matches, we also destroy their confidences…

I find it incredible that Neuer was even able to touch the ball for Özil’s goal. Just shows you the kind of monster we beat yesterday.

All praise to Ozil but yes, like you say, what a keeper Neuer is. We’ll have to really turn up on the day when we play Bayern Munich as home.

Don’t mess with our Mesut!. Oozes class with every touch.

Most exciting player in EPL. If he get to finish the season without injuries surely he will be collecting honors.

Ozil just leaves some sort of spell on me, even if the team are playing horrendously and we’re on a bad run I still look forward to watching us because it’s a chance to see him at work with that unique effortless style. I don’t watch German national team games, but I’ll watch Ozil highlights on youtube because it’s just so therapeutic! When Ronaldo went pretty mental when Real sold him that says all you need to know about this guys talent – he appreciated what a footballing genius he was. It makes me so pissed off when Carragher or… Read more »

Like Walcott, I thought he gave Bayern a bit too much respect. He needed to hit the ball with slightly more conviction. That said, he is coming into his peak years now (or should be in it at 27). We are beginning to see a productive era for Ozil. Where he has to improve is to carry the team by the scruff of the neck when things are not going so well. Ozil tends to play well when the team is playing well and go a little missing when not. This is slightly antithesis to Alexis. If he can bring… Read more »