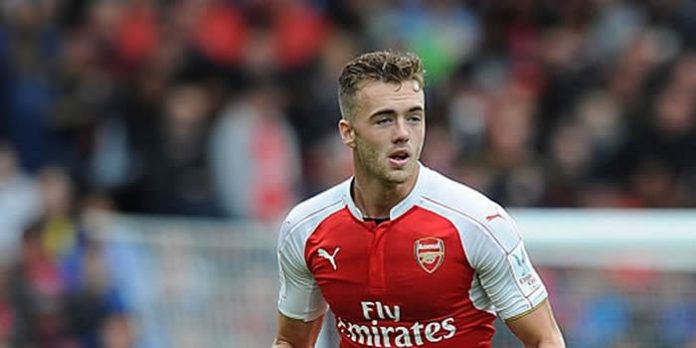 Arsene Wenger has backed two men who will most likely be given a chance in the Capital One Cup game against Sheffield Wednesday on Tuesday evening.

Calum Chambers and Joel Campbell have been bit part players so far this season, but the manager believes this competition is a chance for them to get some playing time, and to show their quality.

On the former Southampton man, he believes his versatility will prove beneficial in his career.

“That versatility will help him in the future because he will tactically know more about the game, he will be technically better prepared and physically he will be at the top, top level.

“I’m confident that Calum will be a successful England player.”

And speaking about the Costa Rican forward, who has really struggled to make any kind of impact in his time at the club, he said, “I like Joel Campbell very much for two reasons. One is that he has outstanding individual quality, but he is also a team player.

“He works very hard for the team. I’m convinced he will get a chance here and that he will take it. He has another opportunity against Sheffield Wednesday and I’m hopeful that he will show that he has the quality to play for Arsenal.”

<strong>Check out this week’s Arsecast Extra looking back at Everton, laughing at Jose and Tim, and featuring a MASSIVE DISAGREEMENT for which we need your feedback.</strong>

Same here, I always thought as our future DM or CD. Wish all the best.

I said it when we were signing him that our attention should have been on stones. I feel he gets exposed at RB overtime he plays. He isn’t quick enough there. In his defence his confidence has slowly declined and i don’t blame him, RB is not for anyone without pace. Second half against Liverpool thrown into a big game with a make shift defence he slowly rose up to the occasion. He has age on his side so with game time he could turn out to be a great player (hopefully) but why did Arsenal not realise who stones… Read more »

I reckon Stones is benefitting right now from more game time. Chambers may be playing at Stones’ level if he remained at Southampton and was playing regularly. Until you get the chance to have a few games in a row it is difficult to show your ability, especially when playing in the defence.

I don’t think Stones is better than him, they’re both pretty similar imo. Calum needs regular game time to prove himself but he’s got the right attributes. Biggest thing for him is to stop getting so many yellows!

Nah stones is better. Reads the game better than chambo.
Chambo will come good though. Has Kos, per and Gabriel to learn from.

The 4Chan Lord
Reply to  Sambo

What is your point?

Passion of the Coq
Reply to  Sambo

Stones is only better today because he got the game time to develop. Chambers is more versatile than Stones will ever be. Campbell and chambers will really come good on very good game with both chances taken. Finger’s crossed COYG!

We enquired about stones 2-3 seasons ago. Undoubtedly would’ve been a great signing.
As for Cahill, no regrets over him. Kos, Mert and Gabriel are better.

Some people are so quick to forget just how good Chambers was at the beginning of last season when he had only just signed for the club and was thrown in at the deep end into a team which was struggling post-world cup. Yeah he was bad 1st half against Liverpool but 2nd half absolutely no complaints, played very well against Spurs regardless of the OG. I can imagine his confidence took a bit of a beating at the Liberty Stadium last season but with a run of games his confidence will come back and we will see him fulfill… Read more »

<iframe style=”border: none; overflow: hidden;” – not sure if agree or disagree.

Check out this week’s Arsecast Extra looking back at Everton, laughing at Jose and Tim, and featuring a MASSIVE DISAGREEMENT for which we need your feedback.

Not sure if that was really strong either.

When the style applies in the comment but not in the article. :/

One thing that’s give me a glimmer of hope with Campbell is his tenacity. Tracks back and presses very well whenever I’ve seen him.

loose_cannon
Reply to  Me So Hornsey

I actually like Campbell, nothing wrong with a hardworker. Hasn’t has a lot of chances to show his end product but has a great one tonight. I’m happy with him and it’s up to Akpom, Iwobi, Gnabry and The Jeff to try and take his place.

Campbell,Ox, Debuchy and Chambers Should make this competition their own and boss it till the finals.

Chambers learning from Mert makes me giddy. Positionally astute and excellent reader of the game?? if he picks up the right tips we won’ t need to clone Mert.

Don’t forget the Flamster. Imagine him scoring another brace, convincing Wenger to make the genius tactical decision of transforming him into a silver Fox in the box, leading our charge for the title and scoring the winning goal in the CL final vs Barcelona…yeah a little far fetched but who knows! I will however settle for a solid performance with a cheeky yellow for a fearsome crunch tackle.

Pass debuchy from the left hand side

Interesting Wenger still talks of Chambers in terms of midfield. It would be cool if he could give Coquelin some competition for the holding role.

I’d actually like to see them play side by side, would be a joy to see what the Coq would do in a freer box to box role, sliding defenders in their own 18 while chambers seats deep.

Santi's Smile
Reply to  Pass debuchy from the left hand side

Competition for Coq? Not sure anyone anywhere could beat out Coq for his place in the team. So important defensively and does contribute with his passing, if only because he gets the ball cleanly and quickly to more creative players. Such a valuable contributor that allows others, like Santi and Bellerín, to really flourish. Irreplaceable and yet still underrated.

Pass debuchy from the left hand side
Reply to  Santi's Smile

Can’t disagree at all. Coq is brilliant, but he can’t play every game. Arteta’s injury record recently is a little worrying were he to have a sustained run in the side, and Flamini has been converted in to a false nine, so it would be nice to see Chambers offer some competition in that role. We’ve got such depth at centre half now, if we got knocked out of the COC I don’t see where he’d get a game

Oh that was close…Damn you Bielik. Camara it is.

By the way, why would anyone give a thumbs down for this?

Hope that those hovering around the fringes of the first team performs good enough to both prove their worth in thebstarting positions and to also advance as far as possible in the competition. More wins means more playing time.

Talk about Calum covering Coquelin is daft. That is a position that requires experience. I think Wenger’s thinking is Calum has the composure (and technicality) to play as a cback for us but this will need time (and games) to develop. Meanwhile should he not materialise as such, there is still a chance he may yet revert back to his natural position at Rback should Debuchy decide to ship out in a year or two. So nothing is inked in stone but the potential is there for the young player to seize. Campbell is akin to Coquelin. Same banter about… Read more »

I’m not worried about Chambers. He has exactly the right sort of attitude to benefit from a few seasons under Kos and Mert. Pace isn’t everything from a CB, especially when he’ll likely have Gabriel next to him.

Very worried for Campbell. Rarely gets game time and gets judged for it. Like Bloggs put it he hasn’t made an impact yet but if you threw games at him like they did Rambo when he was struggling or like the chances Ox gets maybe he would make some impact. Every time he.has a bad game, which is rare considering he rarely gets a game, you see comments slaying him. Then you see the same people come up with excuses for another poor performance “Ox was bad but he has the talent, the tools, the ………., if only he can… Read more »

Off Topic:
Anyone seen JM (aka: specialist in failure, cunt, etc.) lately?
The FA is looking for him. hihihi.

Should we buy John Stones? Not sure we really need him. Maureen would be pissed.

overpriced. I would have liked us to sign Jamaal Lascelles, but then I think we can get him next summer when Newcastle have been relegated.

Not having Arseblog’s thoughts on food – this is a man that goes to Barcelona and eats PIZZA. (You’re great otherwise, blogs – keep up the good work.)

So Wenger is saying that Chambers’ versatility is going to be beneficial to him but that he’ll play CB in the future? That sounds to me like we’ll be seeing him in midfield tonight, and Wenger wants people to put that in the right context. It would make sense to me, as neither Gabriel nor Mertesacker desperately needs to be rested, while pretty much all our midfielders do.
Cech
Debuchy Mertesacker Gabriel Gibbs
Chambers Flamini
Iwobi Ox Campbell
Walcott

I think Arsene is trying to make Steve Bruce bid 18m for Campbell.