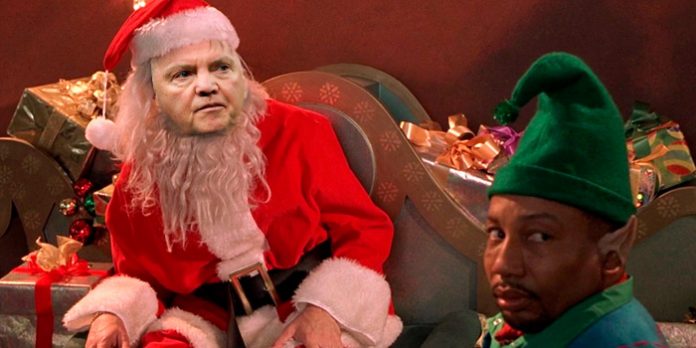 Speaking this week the Dutchman said, “I think you should change, players are exhausted at the end of the season’, and he called the lack of a winter break ‘the most evil thing of this culture.'”

Strong words from van Gaal, and while Wenger agrees there should be a winter break, he believes the tradition of football around Christmas time in England has to be protected.

“I had his ideas when I arrived here but today I would cry if you changed that because it’s part of English tradition and English football,” he said.

“To suppress the game on Boxing Day, the whole of Europe comes to England to watch the game.

“It’s a very important part of us being popular in the world, that nobody works at Christmas and everybody watches the Premier League.

“I want to go on with it, yes. I always pleaded for a break after January 1, but we have to keep this tradition alive.”

Van Gaal then stole all the presents from an orphanage before being sick on a grandmother.

Listen to this week’s Arsecast with Amy Lawrence

Louis van Grinch. The man with the flawed “philosophy”

If Santa had van Gaals face i imagine the kids would have to be lied to about there being no fucking Santa ever!

Arsene Wenger has hit the nail on the head. Every child on earth deserves to watch the Magic Arsenal Show on Boxing Day.

Santa Cazorla – Saving Christmas for all the little children.

Maybe someone could fix him some sandwhiches

What is it with you and fuckin’ sandwiches!?

Too right arsene. Xmas is for kids, they get xbox playstation games and we get real games and long may it last.

Van Gaal is a Mourinho type manager, does OK with managing the biggest, richest club in whatever country.

You are being too kind to Mourinho and mean on LVG.

As far as I am concerned, Mourinho is an evil cunt that deserves to never celebrate Christmas in his life. We should wish Santa to send him to the pit bottom of hell.

Sorry, but the best our Santa can do is help send Mourinho and his horrible band of evil elves to the relegation zone. It’s as good as Hell for them. JT has experienced so much in football that he deserves a chance to cap it all off with a bit of relegation.

Van Gaal is a typical arrogant Hollander – thinks he knows it all. Never forget sitting on my yacht in the Agean, in a marina – and getting a lecture from 2 Dutch girls (students) about how South Africa should be run – they knew it all. One of them had stopped over at Kempton Park for one night to catch her connecting flight the next morning. That was the sum total of their Experience of this beautiful country. You could tell them nothing!

At first I thought you were RamblingPete

not deluded
Reply to  neutral

Where is Pete? Its been too long!

My yacht is bigger than your yacht

Nah, I’m just showing off. I don’t really have a yacht

One of the girls was named Marina?

Both of them i think.

Aren’t players supposed to be tired by the end of the season!?

It’s Santi Claus Cazorla that the kids want to see this Christmas!

Wenger is right, the Boxing day game is massive. We need to drop the league cup, for EPL clubs it’s a potential extra 6 games more than others leagues play. Every other league has just the one cup competition, the Germans also only have 18 Premier League teams so they play 4 less than us anyway and if your team gets to both cup finals you will have played 12 games to German clubs maximum 6 cup games. Italy has 20 clubs with one 6 game cup, Spain has 20 clubs and potentially 9 games to win their cup. So… Read more »

Possession
Reply to  Al the Gooner

And lost both finals..

AnthonyG
Reply to  Al the Gooner

I’d agree with that. Some good memories, but the League Cup has had its day. It’s not even all that venerable and it was started as a result of some rather iffy thinking.

It (the League Cup) was started in an attempt to compete with or distract from) European football.
The FA didn’t want “our” teams mucking about with “Johnny Foreigner”

Ran out of breath just thinking about the last season. Fuck.

The most respected manager in world football has spoken and so be it.
Mourinho casts envious glances at Arsene and wonders why he can’t get a fraction of all that respect. Well Mr Mourinho, you are so flawed in character and bereft of all class that no sane man can put you in the same league as the reverred professor; irrespective of what you win. And speaking about winning, it is always about you: you were the “special one” and not the players.
You only remember the players when things go wrong. Sad little man I must say.

Well said. The man is just a little twat. I think his true value is coming out now

He shits on his team’s own fans, too, apparently.

I would pay for a premium rate ticket to watch that.

To be fair to Mourinho…no, fuck that! To explain why Wenger will be respected after he retires, Wenger is the manager with the courage of his convictions – if he thinks a player is good enough even when no-one else does, he will put that player into the team, even if it results in a humiliating defeat for Wenger – usually it isn’t the unheralded player’s fault.

Mourinho would only do that to prove a point about why he needs to spend tens of millions on a ready made player.

And they say Wenger is a problem to English football, bollocks. A break after Jan 1st wouldn’t be that hard, everyone is broke anyway.

I think the most important thing is FA to do research on those blames and to see if there is the truth or not,because managers can say werever they think according to there experience and true that England they didnt won anything for long tym maybe there is another reasons rather than from mr.van gal

Van Gaal is right, there is nothing more evil in this world than the festive football schedule. It trumps coffee granules in the sugar tin, bits of toast in the butter and even when you can’t get a parking space right outside your house. It keeps me awake at night, I’ll tell you that for nothing.

Evil: profound immorality and wickedness, especially when regarded as a supernatural force.

Example: “his struggle against the forces of evil”

GoonerN16
Reply to  Me So Hornsey

Love how le Prof is, and has long been, a fan of English football tradition.

Too many of the PL managers who aren’t English are just club-oriented: Arsène Wenger loves football above all things, which is why his Arsenal play entertaining football and are everybody’s first choice to watch. He always wants football to be the winner. And England gave football to the world.

Let Moyes take over in his place

But Chambo seems to love Bayern. He was dangerous, playing with freedom the minute he came on.

I want more of that on Saturday as he is set to start.

Why photoshop Aaron Lennon onto there as well? Surely he has no hand in Mr van Gaals hatred of the Holidays?

When is a fairy not a fairy?

When he’s got his head up a pixies skirt then he’s a goblin.

Dunno where that vertically challenged joke came from…

*Gets cape, pulls his underwear over his head like spiderman and drops another whisky like Tony Stark *hiccough*

Or if that was in my house on Christmas Eve

Why does face look like sh*t dat was stepped on with boots.