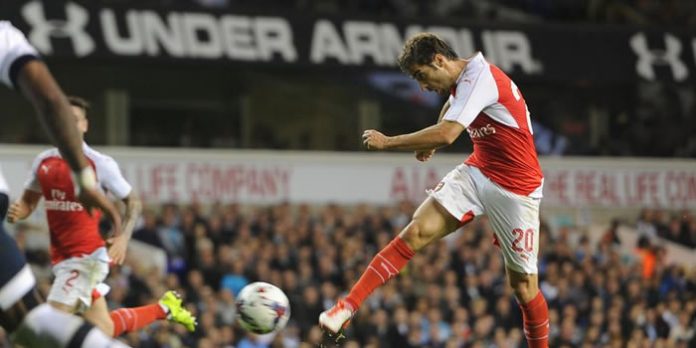 Mathieu Flamini says being back in the Arsenal team gives him pleasure, after spending much of his time on the bench this season.

The midfielder was almost on his way out the door this summer, on the brink of a move to Turkey before he rejected that because he couldn’t leave his BFF of all time ever, Mesut Ozil, feeling lonely and sad in dreary old London.

Flamini’s decision to stay has been justified by the form of the German playmaker. Instead of moping about and looking sad, he’s making assists at will and even scoring stooping, diving headers. For that we have to thank Mathieu.

Now, in the absence of Francis Coquelin and Mikel Arteta, the 31 year old is set for a run in the side, and that’s something he’s looking forward to.

“It’s a lot of pleasure for me that I get back into the team”, he said. “The season is always very long so sometimes you have to accept being on the bench but sometimes you have the opportunity to prove you are still there and can still play in the Arsenal team.

“Football is a competition, it makes you better and stronger. I have an opportunity to be back in the team and I will try to prove every game that I can be in the team. Can I play twice a week for three months?

Can he prove it? We’ll see. Will he try? No doubt. Will those efforts probably end up with him getting a red card for two very avoidable yellows at some point? Almost certainly. Will one of those leave an opponent in a crumpled heap, thus offsetting some of the anger? Unquestionably.

Just like Coq took his chance when it came, I believe the Flam will too. Last year of his contract, a point to prove, he will kick arse with his best mate Mesut and show everyone he is a class player. COYFLAM

Contract dosent matter any more for him now mate……the guy is now a billionaire!, so he is just playing no longer for the money, more probably for the love of the game, and definitely for the love of arsenal?…he is a gooner!

so we should appreciate him for even wanting to try, with the new found wealth….others wouldnt, to be honest, am not sure i would either if i suddenly become a billionaire!

I love Le Flam I always have. Love his attitude and commitment on the pitch, he is a true Gooner…. go Matthieu, show em what you are made of…. COYG

All is well. Long may that last.

We have relative strength in depth with somebody like Mathieu coming in as back up against Norwich and Sunderland but Ramsey at his best will be needed as the season progresses I feel. He has all the attributes to be a top top central midfielder but he must learn to choose his moments to bomb forward for the balance of the entire team.

And stop giving the ball away, and start passing to someone else, when they are in a better position to score in the box.

Is he pleasured by the Coq being out? I’ll take my coat

Three consecutive pieces with a picture of Flamini :O

Arsenal league form in the next 5 fixures:

3 months. Coquelin is out for 3 months he’s let it slip. Wenger won’t be happy. ?

Goonerestgooner
Reply to  Me So Hornsey

Sounds like he’s got the bit between the teeth, eh?! I have faith that he comes through for the team – using his smarts, experience and tenacity – just hope the subtle changes to the team dynamic are overcome quickly and efficiently. Time to go on a ten game winning streak boys!!!

I’ll gladly have SuperFlam in the first team, if not for anything, but for his amazing record of having never been on the losing side when he plays at the emirates! Go Flamster!

He never really feels me with confidence but whenever he is on the pitch he get some sort of job done albeit ‘heart in our mouths’ type stuff.

Plus its always nice to see a billionare among common folks.

That awkward moment when after all Flam’s rants and pleasurings, Wenger decides to bench him for the next 2 games…..
On a more serious note, the Flame has always seem to me as a like for like replacement for the Coq, only as an older version. Lets hope he slides into position and pray for less yellows. COYRs

Fingers crossed he can play that many times a week and stay fit. Obvious stuff, I know.

This website uses cookies to improve your experience while you navigate through the website. Out of these, the cookies that are categorized as necessary are stored on your browser as they are essential for the working of basic functionalities of the website. We also use third-party cookies that help us analyze and understand how you use this website. These cookies will be stored in your browser only with your consent. You also have the option to opt-out of these cookies. But opting out of some of these cookies may affect your browsing experience.
Necessary Always Enabled
Necessary cookies are absolutely essential for the website to function properly. These cookies ensure basic functionalities and security features of the website, anonymously.
Functional
Functional cookies help to perform certain functionalities like sharing the content of the website on social media platforms, collect feedbacks, and other third-party features.
Performance
Performance cookies are used to understand and analyze the key performance indexes of the website which helps in delivering a better user experience for the visitors.
Analytics
Analytical cookies are used to understand how visitors interact with the website. These cookies help provide information on metrics the number of visitors, bounce rate, traffic source, etc.
Advertisement
Advertisement cookies are used to provide visitors with relevant ads and marketing campaigns. These cookies track visitors across websites and collect information to provide customized ads.
Others
Other uncategorized cookies are those that are being analyzed and have not been classified into a category as yet.
SAVE & ACCEPT
wpDiscuz
19
0
Would love your thoughts, please comment.x
()
x
| Reply