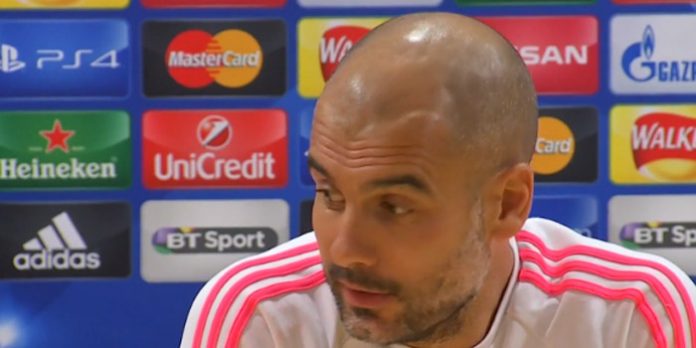 Pep Guardiola has praised Arsenal ahead of tonight’s Champions League tie in Munich, but said his team will be out to cause the Gunners all kinds of problems at the Allianz Arena.

Having lost the last game at the Emirates a couple of weeks ago, Bayern are out for revenge and for the points that will more or less assure them of qualification for the knock-out stages.

The Spaniard was happy to give credit to the Gunners, saying, “They are one of Europe’s top sides. It is a new game after we lost in London. This is a match we want to win in front of our supporters. We have another 90 minutes to move closer to qualifying for the next round.”

But he also spelt out how his team would try and put pressure on Arsene Wenger’s side, looking to cut out the passes to Olivier Giroud who will be asked to try and ease the pressure this evening.

“We will have to adapt our defence as they will want to play their type of game. We want to press them high so they can’t play out of defence.

“I always tell my teams to attack as much as possible and to create as many chances as possible.”

For his part, the Arsenal manager believes his team can show that the victory at home was no fluke.

“I don’t want to take anything away from Bayern,” he said. “They are doing extremely well, they are playing well. I think it’s a good opportunity for us to show that we’ve moved forward and are up to the test we face tomorrow. We have shown that in the first game.

“We have an opportunity to show it again tomorrow and what you want is 100 per cent commitment from the players in an intelligent way. Football is football, you cannot absolutely predict everything and that’s why it’s great.”

It seems like they are – interesting stuff here http://untold-arsenal.com/archives/47768

Imagine if we win this with ‘typical english’ long pass style of the 80’s. Will be very funny.

Guardiola couldn’t win the Championship with QPR if he tried but Wenger certainly would.

Guardiola has won 19 trophies of a possible 27 that he has competed for. What’s your point? Would you prefer to be the topper in Harvard or graduate from a community college?

Gonna be tough but if Lady Luck rides with us we can get something. Coyg

We’ve Petr Cech. He’s got this.

Man, it feels awesome saying that.

If we take our chances especially from set pieces, i believe we can get something out of this. COYG!!

Surprise Pep with Alexis in the Center and counter dive king Robben with Gibbs on the left. Giroud to come on as a Sub and score the winner !

Yes. Will be a real surprise to start with 10 players.!

Oops I did miss out of Mesut! Did I?

Iwobi for Gibbs maybe but. We really need someone upfront who can play alone not Giroud who keeps dragging our midfielders out.

It is the way he glides around the pitch, notching up assist after assist… deceives the opposition effortlessly, and deceived you on this occasion it seems!

Wenger has shown that the old dog can learn new tricks.

So, while we are not going there with our best possible squad due to injuries, hope comes up with some master-plan that gets us maybe even a win tonight.

A point will be a good nights work. Three would would make most teams be worried about us.

While I’m not dreaming about European success this season and the league remains the No.1 priority, success in this initial round would a huge morale booster for the squad, manager and us fans!

All this chest puffing and sabre rattling from bayern is understandable given what happened in the first leg, but means nothing on the day. its 11 arsenal men against 11 bayern men on the pitch (assuming we didn’t do anything stupid to go down to 10 men). They have lots of offensive players that can hurt us but then so do we. i know a lot of the pundits and neutrals already believes it will be a bayern victory, but this is football and the beauty of the game is nothing is a given on the day. Efforts = rewards… Read more »

Okey, mister “our Academy is full of Jack Wilsheres”. I’d feel very lucky that half of Arsenal’s squad is out injured, were I in your shoes, as well.

We have to fuck them in the debuchy.

We won there in 2013 with Fabianski in goal, Jenko at RB, Gibbs at LB and Arteta on DM.

All these positions have significantly improved personel now. We are definetly in with a MASSIVE chance.

we need pace in our team as bayern would try to attack attack and attack,….. obviously pep has done his home work, He knows Olie would lead the line and would be served long balls… if He neutralises that somehow then out counter attacks need to be sharp because we’ll have a few…..you wanna be converting the little you get served! in essence it’s gonna be a big night for our wing backs especially debuchy and for our wingers especially campbell…… I can always count on our midfield trio of santi, Ozil and coq…… as well as Sanchez! i’d be… Read more »

It’s going to be tough without Bellerin, Ramsey and Walcott. I believe in the lads though. Plus, we have the JEFF on the bench to come on and wreak havoc should he be needed.

Seeking ‘FINANCIAL’ support from all fellow gooners here & beyond.
my dad is got an accident & requires an ankle surgery.

Send me your bank sort code

And your account number, and your PIN. I have millions of dollars I have to get rid of, I just need your account access details so I can deposit it to you.

The away fans should be singing this loud all night. https://www.youtube.com/watch?v=1e75XFc40Sc

Their eagerness is their achilles heel. They will want to avenge the defeat and believe that Giroud will not offer a threat with pace so they will feel confident pressing high.

Also they will press our right with Debuchy and Campbell so we will have to be very attentive there.

The game was set up perfectly for Theo and Ox (or even Welbeck) 🙁 ! Time to show that strength in depth!

A bit of an anti football suggestion, but how about we play debuchy, mert, gab, Kos and nacho in a five man defense lol then have coq and flam sitting just in front – get past that robben you diving gargoyle!!!

Because we never play that way and wenger teams are heavily orchestrated and require automatisms to function. So you can’t just change shape that simply.

We play as we did in the emirates – surrender the possession frustrate them and then hit them on the break,
I’d almost say lets start campbell up front and bring giroud on after 60 mins.
Play flamini at right midfield to support debuchy.

I fear a mauling but we could actually afford to lose this one but we must keep the goal difference respectable.
If the rest of the results in the rest of the group go as they ‘should’, then its winner takes all in our last game against Olympiacos.
TBH this weekends game is more important in my opinion.
Saying that, i’d love to push Guardiola’s words back up his arse!
COYG

A point here would be a great point for numerous reasons . If we can stay solid defensively and that means Coq & Santi really digging in too we will have a decent chance to take something from the match . The concern for me like most people is Debuchy , he is definitely bang out of form & has been woeful at times this season . Campbell has a big part to play down that flank.

In watching the implosion of Mourinho at Chelsea, it strikes me that his spectacular exposure is an excellent filter to judge Wenger on. Despite almost a decade of adversity, an age of frustration at not being able to compete, never has Wenger struggled for so long and never with a team of such talent. Chelsea have a squad and a first team that is capable of competing for all the trophy’s – they have a few absolute stars in Hazard and Fabregas and yet lie 16th. Wenger got a team with eboue, bentdner, adebayor, denilson in to europe year on… Read more »

Bayern have been beating their chest a lot these past few days. I will love for us to prove to them that our win over them at the Emirates was no fluke

With Ozil feeding Alexis and Campbell’s pace, and if Giroud can hold the ball up well, we will be in with a chance for sure. We are far from a long ball team as Pep suggests, and even our win against them 2 weeks ago didn’t feature many long balls…

Anyway, let them press us, it will give Alexis a bit more room on the counter! 😀

Admittedly, with Giroud up top instead of Theo, we do play more long balls. The key here is the support for Giroud. Ozil’s extra industry this season will be vital. Also a big question mark over Alexis. It’s official: he plays better alongside Theo, but now’s the time to show what he can do with Giroud

The game will depend on how few the team keeps the turnovers in our own half. Bayern may play their 2-3-5 formation and will aim to press high and increase the turnover rate. Joel will need to double up on Debuchy who may be specifically targeted. COYG!

We have to be very smart when they press us as we have had a bad habit of costly turnovers in our defensive 3rd. At times we may have to relieve pressure quickly to get over their first line of pressing (which I know is not in our DNA, but needed in this match) with a longer ball. I would love to see us press them high some just to switch it up a bit, all we need to do is to pick off a couple of passes. At minimum it could open the field up for us instead of… Read more »

Form is temporary, class is permanent.I don’t think Debuchy has suddenly become a bad footballer.Come on Mathieu prove to everyone that there is still life in the old dog yet.

Joel Campbell could be a very big pleasant surprise today. Just a feeling though

Have same feeling for Debuchy too.