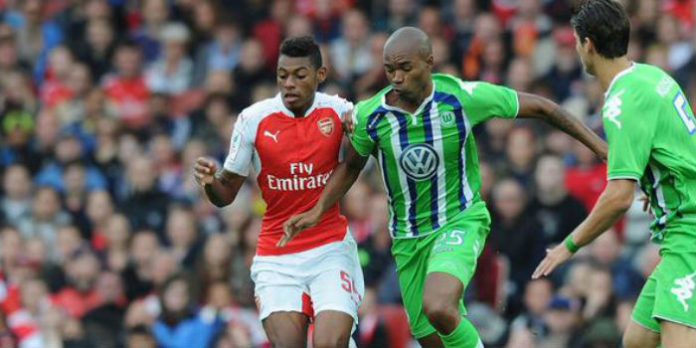 Rarely has there been such hype about a player who has yet to feature for the Arsenal first-team in a competitive match.

Jeff Reine-Adelaide was a relative unknown, at least as far as Arsenal supporters were concerned, when news filtered through that the club had agreed a deal to sign the winger, along with striker Yassin Fortune, from Lens in May.

The early signs had been extremely encouraging, with Reine-Adelaide impressing for France at the U17 European Championships before being provisionally selected to travel with Arsenal for the Premier League Asia Trophy only to be replaced by Jon Toral at the last moment.

Then came the weekend when the Reine-Adelaide hype train hit full force, with the 17-year-old making a stellar impact in the Emirates Cup. His cameo as a substitute on the Saturday against Lyon was encouraging, but his performance a day later against Wolfsburg, when he provided an assist for Theo Walcott, was even better, and prompted suggestions that Arsenal had in their grasp a player who, despite his tender years, could make a sizeable impact on the first-team squad this season.

Circumstances have conspired against Reine-Adelaide in the sense that he is yet to make his competitive debut for the club. An injury suffered whilst playing for the U21s against Newcastle United and his subsequent participation at the U17 World Cup meant that the French youngster wasn’t able to feature in Arsenal’s Capital One Cup campaign.

He has been on the bench for several recent first-team fixtures, but, with Alex Oxlade-Chamberlain poised to return to the squad in time for Sunday’s game against Norwich City, Reine-Adelaide will probably have to wait a little while longer before he makes his official debut.

That may not be a bad thing as it will enable Reine-Adelaide to feature in Arsenal’s FA Youth Cup tie at home to West Bromwich Albion a week today, whilst he could also be involved in the concluding UEFA Youth League group stage fixture away to Olympiacos.

Depending on the opposition, Reine-Adelaide could well be involved in the first-team’s FA Cup 3rd round tie, and, if there are any further injuries to attacking players in the first-team, the winger is likely to be first in line to step in, as he has seemingly edged ahead of Alex Iwobi in the pecking order at the club.

Much of the hype around Reine-Adelaide is justified. He is a sublime dribbler who is capable of going for goal himself, whilst he is also tactically astute. As you would expect with a player of his age, though, there are some aspects of his game which require improving, most notably his tendency to lose the ball at key moments.

Reine-Adelaide is undoubtedly a talent for the future and he may still be able to have some impact on the first-team scene this campaign, but it is just as important that during his first season in England he features as often as possible for the youth sides in order to build up his sharpness and to start to iron out the deficiencies in his game.

The hype is considerable, but, despite his clear ability, it is perhaps time to be patient with Jeff Reine-Adelaide.

He has a talent/he is talented, not he “is” a talent.

Thank you, Mr. Stuart, for the correction.

You’re talking about the progressive meaning while the talent in question is used as an adjective.

He might need a number of top flight cameos though. He is certainly a Wilsheresque trajectory prodigy. Looks FIT too!

All that is gold does not glitter,
Not all those who wander are lost;
The old that is strong does not wither,
Deep roots are not reached by the frost.
From the ashes a fire shall be woken,
A light from the shadows shall spring;
Renewed shall be blade that was broken,
The crownless again shall be king.

He’s going to win us the tittle.
I jest, but I have big hopes for this one.

The thumb down is probably from someone who thought the last two lines should rhyme.

Jokes aside, I think he is a great talent. His physical level looks to be above everyone that are around 17 and his technique seems to be very amazing. I think he will be great.

At 17 Wishere was playing for the first team. He should get opportunities as well.

I know newest is always best but,
Who is the brighter prospect- the jeff or zalelem?

At the moment it seems like Jeff is the brighter prospect but then that could change should he get a loan somewhere. Gedion isn’t exactly pulling up trees at Rangers but then they aren’t the force (in Scottish football at least) that they were.

Sorry to rain on the parade but we’ve been here before… remember JET? Definitely hope he makes it but going to temper my expectations…

Michael Owen was already a twunt at 17

Absolutely agree with Wenger. A good loan will be extremely benefitial.

We have some very exciting young players in the wings. Bennacer is another one.

Jack Wilshere started for us at 16.

Look at his injuries.

The thing with physically developed youngsters is they tend to boss lower age groups because they’re at a huge advantage physically. But with the Jeff you know straight away he’s got more in his locker than just his physique. His touches are sublime and his passing range impressive for someone that young. If he can continue to develop both aspects of his game I have no doubt he’ll develop into a monster, from the likes of Vieira, Toure, Pogba, and of course Diaby if not for the injuries. A rare type of player and I’m glad he’s with us. Here’s… Read more »

It’s not a case of “His touches are sublime and his passing range impressive for someone that young”, and few 17 year olds have a physique advantage over grown men. if he plays for us or a loan team he’ll be competing for starts, playing against, and judged in comparison with grown men. A lot of players sent out on loan don’t get many starts because they aren’t so special when compared to mature players in their own teams. If your own teammates bully you off the ball in training games then what use would you be in a real… Read more »

Some light in these dark times; https://www.youtube.com/watch?v=66fX6m3_9M4

“As you would expect with a player of his age, though, there are some aspects of his game which require improving, most notably his tendency to lose the ball at key moments.”
A bit like Alexis then?

I agree. He should remain in the u21s this season. I hope he can have similar performances in the UEFA Youth league like Bellerin did in the NextGen tournament in 13/14. I think we should wait till next season to look at a role in the first team when Rosicky, Arteta and Flamini leave.

I’d rather see him given a shot or two before Rosicky, Arteta, and Flamini pack it in, so he can benefit from their wisdom and mentoring before he has to replace one of them.

This website uses cookies to improve your experience while you navigate through the website. Out of these, the cookies that are categorized as necessary are stored on your browser as they are essential for the working of basic functionalities of the website. We also use third-party cookies that help us analyze and understand how you use this website. These cookies will be stored in your browser only with your consent. You also have the option to opt-out of these cookies. But opting out of some of these cookies may affect your browsing experience.
Necessary Always Enabled
Necessary cookies are absolutely essential for the website to function properly. These cookies ensure basic functionalities and security features of the website, anonymously.
Functional
Functional cookies help to perform certain functionalities like sharing the content of the website on social media platforms, collect feedbacks, and other third-party features.
Performance
Performance cookies are used to understand and analyze the key performance indexes of the website which helps in delivering a better user experience for the visitors.
Analytics
Analytical cookies are used to understand how visitors interact with the website. These cookies help provide information on metrics the number of visitors, bounce rate, traffic source, etc.
Advertisement
Advertisement cookies are used to provide visitors with relevant ads and marketing campaigns. These cookies track visitors across websites and collect information to provide customized ads.
Others
Other uncategorized cookies are those that are being analyzed and have not been classified into a category as yet.
SAVE & ACCEPT
wpDiscuz
27
0
Would love your thoughts, please comment.x
()
x
| Reply