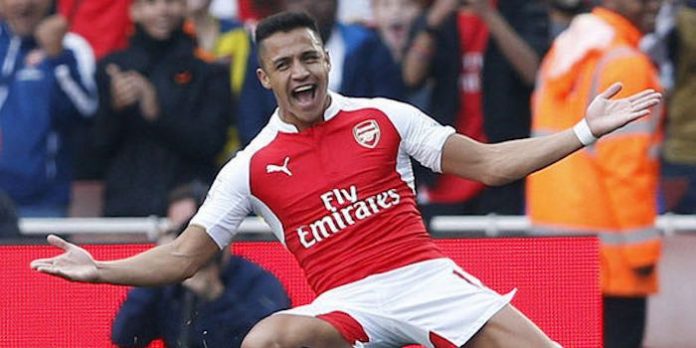 The Mirror, via John Cross, report that Alexis Sanchez has agreed a new deal with the club which will keep him in London until 2020.

The Chilean forward has been a huge success since joining the club last summer from Barcelona, with 25 goals in his debut season including a cracker in the 4-0 FA Cup final win over Aston Villa. The 26 year old is now in the peak years of his career, and it seems as if the club are making sure he spends them with the Gunners.

The news comes on the back of other reports about Mesut Ozil’s future with Arsene Wenger similarly keen to ensure the German international remains at the Emirates for his best years.

Sanchez has scored 7 Arsenal goals so far this season, but has looked a little fatigued in recent weeks, a situation that won’t be helped by playing two internationals in the last week.

However, perhaps the boost of a new deal will see him come back to life having not netted since opening the scoring against Watford a month ago.

This makes me happy.

strongbad
Reply to  Unyoke the Ox

Makes me feel this way

Zorro in the Box
Reply to  strongbad

This led me on a half hour distracting wikipedia jaunt on chaka khan.

This is unexpected but the most awesome kind of news!

Alexis loves football so much, we could of just offered him a mars bar and a bottle of club orange and he would have signed,jokes aside I’m over the moon he signed, must really be enjoying life at arsenal.

Hope we don’t let him down as a team and win enough to vindicate his move.

Would be brilliant news to tie them down to long term deals, realistically that should see both of them with their best days at Arsenal!

His first goal against manure was worth every penny,
the second was priceless. 5 years of that would keep us up to our elbows in levulinic acid.

Good lord! Why all the thumbs down? Is it because some people are so precious about the Arsenal that they thumbs down any comment that contains any words which are vaguely negative, regardless of the context.

This is absolutely golden but it kind of pisses me off the way contracts go these days, we literally signed the legend a year ago, on a long term contract, and now we have to tie him down for longer to keep him from leaving (although don’t start with that bs, who’s he really gonna go to? I can only see him moving to Juve (if they do a lot better) or back to Barca (if they lose one of MSN) and both seem unlikely) It sucks that that’s a necessity in the modern game but at then end of… Read more »

Awesome news. Ozil hopefully will see the commitment of the organization to retaining the best. Also, maybe go all out, and get that Neymar chap, since he wants to tax-bail from Spain. If we don’t, someone else will.

Perhaps we could maneuver a reverse bidding war between him and Lionel to see who wants to play for the club more?

Or just skip all of that, sign them both and have a front line of Alexis Messi Neymar, might win a thing or two

Seriously, I saw the headline and immediatly wanted to print it out and frame it on my wall! Lol
Happy news indeed

Great news. Sanchez and Ozil are our future.

Fantastic news to wake up to.

Woow yeah.. Just like a news of new signing.

Hahaha And What? ?
That doesn’t mean that he will see out his contact!
It just means that he will be paid more than before while he is still here and that Arsenal have upped his buyout clause, what with Utd scum sniffing around his ass!

We need 2 or 3 more reinforcements,
To cover our injury prone players!
I hope that wenger brings them in come January, Otherwise it will be the same old ? Different Season scenario!

What is a spur supporter doing on an arsenal blog ? Guess nothing gud happening at your end ?

and would you have preferred the headline read “Alexis agrees deal with XXXX team?” One thing I know for sure is even if we don’t strengthen I still want to see Alexis running around in an Arsenal jersey.

Juvenile trolling. Nothing to see here, move along.

Teams in England do not fix Buyout clauses on the players contracted to them. Try harder next time, Einstein.

Aside from this great news there has been strong reports that we have met Nolito’s release clause. Looks like Ivan has been busy the past couple of days.

But … but … Man United was supposed to buy Alexis! What a crock of steaming sloppy shite! Alexis is no Van Per$ie

Have to imagine Ozil assisted Alexis with a pen when he was present the paperwork.

Obviously, how else would it have been signed.

Zorro in the Box
Reply to  Gooneropolis

Lacks little bit sharpness in front of the dugout though.

He probably heard the rumours that United wanted to sign him. The next day he sprinted to Wenger’s office saying ‘boss. contract. 5 year’.

I’ve heard that Pierre-Emerick Aubameyang has been playing pretty well recently. Still don’t think we’re going to sign him. But Patrick Auyamang? Hopefully not. Unless he’s a new dog for Alexis to play with at the training ground.

Loving every bit of the Arsenal Fc…COYG!

Please let it be more than paper talk