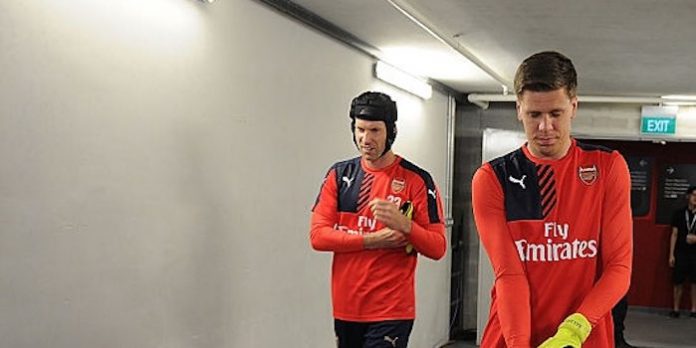 Arsenal’s former number 1 says he understands completely why Arsene Wenger bought Petr Cech, despite the fact he was willing to stay and fight for a place in the Arsenal team.

The Polish international played over 180 games for the Gunners, but after a difficult season found himself behind David Ospina in the pecking order – although he did play in the 4-0 F ACup win over Aston Villa.

Asked if he was put out by the signing of the Czech international, he said, “Are you joking? For that little money? Of course he had to!

“If someone offered him Cristiano Ronaldo for a good price, he would have to buy him. The manager has to think about the club and its fortune.

“Why would Wenger not do it? Because Wojciech Szczesny, who grew up at the club, is here? Be serious here – Wenger has to consider the overall good of the club first.

“”I actually wanted to stay and challenge him for the spot but after a conversation with Wenger it was obvious that I should be looking for new opportunities.

“I ‘m not stupid – if you buy one of the world’s best goalkeepers it’s not to keep him on the bench.

And the Arsenal manager revealed how the move happened.

“I met Petr and he told me he could be available for that money and I said: ‘For that money, I’ll do it, so you do the job’.

“I had no fight with Chelsea, honestly. He had an agreement with his chairman that he could go for a certain price anywhere. We managed to get him here and we are happy with it.

“He has given us all his experience and his leadership because he is a leader on the pitch.

“He talks, is brilliant intellectually, he can analyse and is highly focused. He is the perfect goalkeeper.”

Szczesny is currently on loan with Roma where people have called him a lunatic, but in a good way.

“Where people have called him a lunatic, but in a good way.”

A necessary part of being a keeper I gather.

Szcz has been exactly what you would expect at Roma: all over the place. It doesn’t help that Garcia bizarrely insists on starting a different back 4 practically every game. But he’s definitely the same old Sczc. You never know if you’re going to get sublime or totally ridiculous.

Something like 1 clean sheet in 15 games isn’t down to Szcz alone but he has played his part. He put it into his own net ala Ospina at least once, and he’s been hilariously out of position for a couple more goals too. He’s also made some tremendous stops.

so same as usual: high risk, but high reward when he pulls it off. I much prefer the calming presence of Cech and, to a lesser extent, Ospina.

I like Ospina well enough, but I don’t know that calmed is quite what I feel when he’s selected.

Everybody was talking about how reliable Ospina was and this was backed by statistics. Now, we have Cech and all the sudden Ospina became so risky.

You gave a misleading account. Roma is third in Italian league, one point from top. Seven wins, two draws, two defeats. It doesn’t look Szczesny was a liability there with one clean sheet and errors.

The full Interview was rather candid from Szczesny which was nice to see. And lest you forget he has a nice car (probably lights up in here) and lives in a flashy apartment which he pays for with his money because he earned it through hardwork and commitment.

I always worry about people in football who refer to themselves in the third person. It is a trope normally reserved for utter cunts like Jose Mourinho. Please shake that habit off before you come home, Wojciech.

Otherwise, glad it seems to be going well for him at the moment.

To be fair to him he does appear very modest from the quotes.

Different languages are different. It sounds a lot weirder in some languages than in others. I don’t know if Polish is one of the ones where it’s just normal. I have this idea that it’s normal in a lot of eastern european languages for some reason.

It’s pretty obvious to Cornelius that Szczesny was doing it in a clearly self-deprecating manner.

Lunatic! Did he work with Jens Lehmann at any point at the Emirates?

Personally I think he’s spoken quite maturely here. He knows what the situation is. Hopefully he’s keen to return and fight for his spot at some point.

his career at arsenal is over. he won’t start ahead of cech for the next 3-5 years and by then there will be another goaltender in our crosshairs. you had your chance szcz and you blew it.

I think you’re right. With Cech on the team he will remain number 2. He’d best be learning Italian.

I think after watching Le Coq’s career U-turn, you might need to think twice before judging “someone’s finished at Arsenal”

Love his personality, especially when winding Spurs fans up at the piano keyboard. But Szczesny is an erratic goalkeeper and I usually feel a dump coming on when he is between the sticks. Wish him well at Roma.

How fickle people are. He shared the golden glove with Cech recently and Cech has had his slips too. Szczesny is a real talent “for his age”. Let’s see how he matures. I’m a fan.

I agree 100% and btw, i am a fan of scz too….people tend to forget that not too long ago, he shared the golden glove with petr, and was actually in that season ranked ahead of De Gea, ….yes, ahead of De Gea! You’ve got to have real talent to achieve that at what was a relatively young age for a goal keeper, and such talent don’t just disappear overnight. I personally feel sorry for him because he basically had a really bad game (which all keepers have once in a while), and he compounded that by an error of… Read more »

BTW guys, i’d posted something on le grove with a different opinion and the commentators put vitriol on me for for the temerity to criticize the blogger. the blogger, pedro (or whatever his name is) exploded by replying ‘no one cares about your opinion’. i’m glad i’m here.

I’m a little surprised. I thought Pedro was more tolerant of opposing views. Maybe he’s getting thin-skinned in his old age.

Jose and Chelshit fans did not understand our Cech purchase.;)

Anyone moaning about our lack of depth should look at Chelsea who were until recent season lauded as the team to beat with strength in depth…after all they bought “out field” players and got rid of a surplus keeper “on the way down”.

Sure we are not (psychologically) anywhere near on par with Bayern but to suggest we did not do business in market is the height of absurdity.

Cech has been an extremely INFLUENTIAL addition this season.

Szsc may yet rotate back to Arsenal if following a good showing at Roma. There is no knowing if Ospina will be content to stay as number 2 and Szsc at very least is slightly younger (will have a bit of patience on his side) The same can be said for the Rb situation. We do not know if Debuchy will regain his form or if he will dcide to ship out. We may be able to bring Jenkinson back but there is also possibility of re-instating Calum back to his natural position at RBack and bring in another Cback… Read more »

Chambers is getting a little too big to be a RB.

He is more natural at CB. Calum has said so in videos. The Wenger has mentioned it as well.