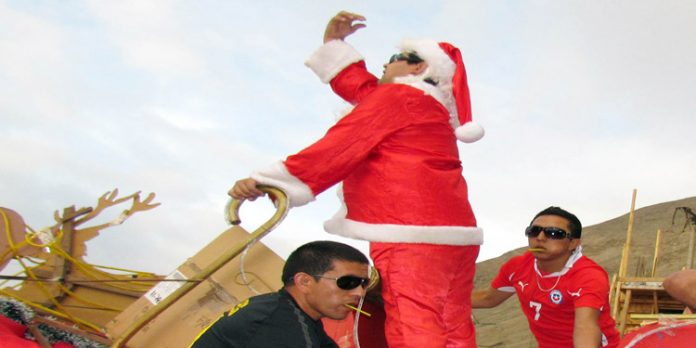 Arsenal are allowing Alexis Sanchez to travel back to Chile for a week as he looks to recover from the hamstring strain he picked up against Norwich on Sunday.

In what will surely be part recuperation, part relaxation, Alexis will spend some time in his native country in a kind of enforced mid-season break.

In an interview with Radio Tele13 on Tuesday, Chole coach Jorge Sampaoli said, “We have contacted the medical team at Arsenal, who gave him a week of treatment in Chile.

“We have to see how it is [the injury] to know how quickly he can recover, but we are aware of everything and we’ll see if we can contribute to Alexis getting back on the pitch sooner.”

So, hopefully some home cooking and a bit a rest will help him along the way, with a mooted return for the Man City game on December 21st.

And having missed out last season due to the festive schedule in England, we wonder if Christmas might come early for the people of Tocopilla, his home town. In previous years he had played Santa, throwing out presents for the residents from the back of a large truck, but that wasn’t possible because of the lack of a winter break in the Premier League.

Once he doesn’t do his shoulder any damage … or play any games of 5 a side with kids on a rock hard pitch … don’t do Alexis, no matter how much they cry!

I would love a hat-trick against City from Sanchez Claus.

The only way Alexis was ever going to get any rest and recovery was through an injury of some sort.

So, better now have a few (deserved) weeks off than at a truly crucial point in the season.

(a) His injury isn’t a season-ending one. (b) We have the players to cover. (c) He should come back to us better than ever.

If this goes well it could be the best thing to happen to our season.

Would agree if the heart of our team, Santi and the Coq, hadn’t been injured too and we hence have to change our whole team around, stability and cohesion are being lost. Though admire your positivism. If we can beat Sunderland and Villa and at least draw with City then I’ll be agreeing then.

Ive said this else where but… Come the end of this season Sanches will probably have played in excess of 30 PL games he will also have played 10 or more cup games and 6-8 internationals. So i am not sure what this caterwalling is about – Wenger played him because so many senior players were missing – ok now he has a hamstring injury that will keep him out for a few weeks. Now we could have rested him for a couple of weeks in an injury crisis or hope to get through the worst of that crisis and… Read more »

Some interesting analysis there.

Really, someone should be complaining about CONMEBOL organising the Copa America in years directly after the World Cup (just having looked at the frequency of the competition, it’s organisation seems to be completely random) and making it every 4 years (the same should also apply to the AFCON) to give players a rest every other year.

Player fatigue is entirely at the door of Fifa. All the big clubs in Europe do not rest players – especially at this stage of the season – As well as the above – Philip Coutinho played for Liverpool the same day as Alexis – jackson Martinez also played for Atletico in their first round of matches in August. Ther is no reason not to sync the Copa with the euros.

AN Other
Reply to  Double98

And they should stop these tournaments happening more than once in 4 years. It makes no sense anyway and for tournament with so few countries taking part, it makes even less sense.

To make things worse, there is a Copa America being held in the USA next summer too and Chile are in it. If Alexis plays there and they qualify for the world cup in Russia, by the end of 2018, he would have had FOUR straight years of playing without a proper summer break.

I know players are paid handsomely, but you can’t make them work like this for that.

Since we got rid of all our african players why not hold it twice a year?

The Afcon that is.

In the meanwhile, Ox on the left would be the most like for like replacement. He looked good against Norwich and I’m backing him to be really important for us in the next few months (provided he doesn’t get injured again!)

We don’t want to see any running around on the beach videos.

Sanchez is becoming a pain in the backside.why can’t he just recuperate in England. Surely England being a first world country should have better health care facilities than Chile.I am beginning to doubt this fellas loyalty to Arsenal. Sometimes you gotta use your head not heart Mr Sanchez

Up there with the worst comments ever seen on this site. And that’s saying something.

If Sanchez is a pain in the backside then order me a crate of butt plugs.

I’ve got a feeling that he might be just kidding, but, as this website is increasingly becoming a humour-free one, nobody is getting the joke.

I’m not sure you’re right there. Doesn’t read as if it’s a joke.

I don’t know if flying might aggravate the injury at all, but otherwise what difference will it make where he recuperates? It’s not like he’s going to need medical attention to heal a strained hamstring – he just needs to rest.

It’s the way you tell them

Even if it was a joke it still is one of the worst comments ever.

“I am beginning to doubt this fellas loyalty to Arsenal”

Well, it made ME laugh.

There are jokes and then there are unfunny statements which just piss off a whole bunch of people. There’s a fine line, and unfortunately (for you), it’s the reception that determines which is which.

And therefore it strangely deserves a thumbs up.

In this country it wouldn’t happen… Health and safety!

Sometimes you gotta use your head before you post, Mr. Ozil’s Eyes. What an appalling thing to say.

That has to be a joke…and a good’n too!?

he’ll most likely be doing nets in street 5 a side within 2 days, having fashioned for himself a “la charina” – a type of rudimentary go kart synonymous with the backstreets of Santiago- so as to propel himself back and forth across his line and marshall some kids into a rudimentary back 2. Perhaps he gets stabbed fending off a street urchin attempting to sell him co-coyena, “for injury very good, señor”. i will leave now.

Can you say rudimentary again?

Regarding pappshaangosjungleboonie’s comment, he tried, give him a break!
How would you like a user name that long?!!
🙂

Arsenal is winning the league 2015-2016. You heard it here first. I know the injuries and squad depth doesn’t give a great picture of the future. But i really do have a sneaky feeling about it this time around.

Thumbs up for keeping a positive attitude. If Leicester can be tied at the top of the table, Vardy set a premier league record for scoring in consecutive games, and the top three goal scorers include Vardy and Ighalo, stranger things have happened. Keep the faith in the team – COYG!

Worrying. I remember seeing a Sanchez feature (I think on the BBC), which included footage of him driving a souped-up moped with a mate on the back, careering through the packed streets of Tocopilla.

I saw that – it was the most heart warming and inspiring thing I have ever seen a sportsman do.

His youth and the town he lived in made him the man he is today, and I’m grateful that he has the opportunity to reconnect with it.

Hope he comes back for City; we will need all available ammo to get the 3 points.

He’ll be fit in a week. SUPER SANCHEZ

No rotation and no signings made alexis a dull boy

We should really be looking to fix the injuries. because the amount of muscle injuries that our players get is just astounding. Impact injuries I can understand but muscle injuries are all down to something on the training ground.

Anyone think we can win at Olympiakos by 2 goals without Sanchez? i doubt it. Which means Europa league.

I see no reason why we shouldn’t thump them next time. Sanchez or no Sanchez. Just like Zagreb they are shit compared to us.

I would not be surprised to hear of his playing pickup football while back home even while injured. He loves playing that much.

Who the smeg would thumb that down?

Shouldnt be a problem as long as he takes a plane and doesnt decide to run/swim his way to Chile and back.

I heard the compromise is that he will use a specially constructed canoe that will allow him to rest his injured hamstring but still paddle.

If it just a win with two goals scored (assuming 2-1 win also make us thru which is not) and if it just only without Sanchez, then it is possible, highly possible. But, since we are also without Coquelin then it is better to think it is 3 goals minimum as safemark which is still likely possible, even without Sanchez. And if it we’re without Sanchez and Cazorla (even worst if Koscielny too join the injury list) while Ox and Ramsey can’t get back to their best form, then I’d say just enjoy the game and don’t put much hope… Read more »

I read that as “if it’s just a swim”…disappointing 🙂

Now I see the secret to his energy levels. He spends the days training in the Andes at altitude breathing the already thin air through a tiny yellow straw.

“Once he doesn’t do his shoulder any damage … or play any games of 5 a side with kids on a rock hard pitch … don’t do Alexis, no matter how much they cry!”

anybody could help to explain this? couldn’t understand it with my poor english…

He dresses up as Santa Claus and throws out presents to all the kids of his hometown every year? Seriously? I know he sent truckloads of relief to disaster stricken areas after that earthquake but wow, what a guy.

We all know he’s an incredible physical specimen, but what a heart of gold. I’m developing a serious mancrush.