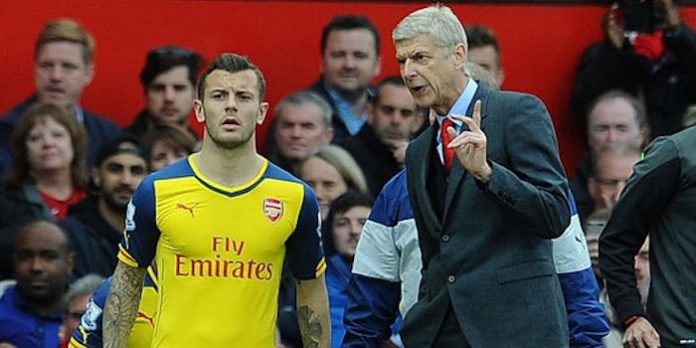 Arsene Wenger has played down fears that Jack Wilshere’s Arsenal season could be in doubt, and that he’d miss out on Euro 2016 next summer.

Reports emerged during the week, on the back of some comments from the Arsenal manager in fairness, that his return to action had been delayed indefinitely.

“He will not be back before February, that’s for sure,” he said. “I said February but honestly I don’t know. I let him do his recovery. It’s going slowly.

“Once he goes again, goes outside to train, once he is back again into sharp, hard work physically, you count five or six weeks, so at the moment he is not there yet.”

At today’s press conference he was asked again, but this time sounded more optimistic, dismissing suggestions he could miss the European Championships.

“I don’t believe that at all,” he said. “I maintain the end of February, it could be earlier that he will play again. Consider you play the European Championship on June 10, that is a long way to go.”

Let’s hope so, it’d be a real shame for him and us if he didn’t make a contribution to what is a promising season thus far.

I love elephants too!

Really Arsene? There’s being blindly optimistic and there’s being pure bloody minded. Looks more and more like Jack will never realise his full potential…bit-part player at most which for someone with his undoubted talent is such a shame. Hope this won’t be the case but I can never see him getting fully fit enough to have a sustained run in the team 🙁

….not sure why else all the negs. As things stand the above is kinda true.

Wilshere is getting to same injury record as Van Persie but less than Rosicky and far less than Diaby at the moment but the fear is justified.

So you know the true extent of Wilshere’s injury? Please tell me.

There are some outlets who are not in favor of Jack being selected for the euros by saying he’s not good enough.

I can go out on a limb and say he’s one of the best players in that English side if not the best. The guy has been lauded by the likes of xavi and Iniesta FFS.

Well, who needs wilshere when you have jonjo shelvey and Fabian delph. I wouldn’t bet against England getting knocked out in the group stages.

From an arsenal perspective it’s probably good that he gets a chance to recuperate.

Curious as to who these outlets are exactly? That’s a line I’ve never heard before.

Pass debuchy from the left hand side
Reply to  Unnecessarilystupid

Twitter probably, no news outlets are saying that that I’ve read. Melodramatic cobblers.

Likely an op-ed written by Mr. Savage, and edited by Moyes.

Moyes is still waiting outside the courtroom, for the jury

I think his career is in doubt 🙁

Who give a feck about England? I want him back for Arsenal.

i think, jack himself does! the way he talks about england, i think for his sake, you want him to play for england!

I fear a Diabyish trajectory.

Dear thumbdowner my apologies for offending you!

I hope this particular spell on the sidelines teaches him a lesson not to rush into harsh 50:50 challenges knowing fully well how his bones are fragile then try to stay fit for an extended period. Great player imo

I’ve got faith in Jack. When he first came through he was so good, so unique, so exciting. He’s still 3-4 years from the supposed ‘peak’ years of his career; he’ll be fine, just give it time.

At least we’ve signed kind-of a replacement/cover in El-Neny. Looks like Wenger learned that we cannot count on player who’s now been largely unavailable in his short career then available. Not even he’s constantly injured he’ll have a heck of a task to get into the first team & if Wenger is realy going to sign Xhaka then it’s going to be even harder for him. I’d like him to stay at the Club but I don’t see it because of injuries & need of playing time. The same would go for Ox. Not convincing ATM & pretty unlucky too… Read more »

Off topic but, Blogs you said we only have 2 worldclass players in Sanchez and Ozil. I’d argue that we have 3. You can add Cech 😉

Kos and Cazorla are very close indeed but, Sanchez, Ozil and Cech just about walk into any team in the world.

And at which team would you put Koscielny on the bench? Sanchez IS world class, but he was behind Pedro at Barca. So I would say yes, Cazorla and Koscielny are world class.

Unfortunately end of Feb/early March is a peak period for us so Wenger will not throw him in without getting him fully fit and up to game speed at that point. At the earliest that pushes things until April. Only chance he has to get into the team if he is able to return is if Coquelin and Carzola don’t return and there are other injuries as there will be no rotation during the run in.

It’s CA-ZOR-LA, for fucks sakes, CA-ZOR-LA. Not fucking Carzola. Learn how to spell our own players’ names.

All I know about jack is that his two goals for England, well you cannot score those if you are not a special talent. And that tune during the victory parade? Legend

Here’s a thought, Jack. Try to play somewhere approaching a full season for the club and therefore fans who lay you. Once you’ve done this, worry about playing for England. Which you won’t need to as there are inanimate objects which would stand a good chance of selection given the competition is the likes of Henderson and Delph.
Im a bit sick of players putting themselves above the team and the fans.

Eh? How has he done that?

If Jack could make Euros, it would undoubtedly be good for Arsenal. The dude needs some playing time, badly. Not a fatigue issue.

I have no doubts about Wilshire class but having one of your best players fit for a few months out for a few months , in a constant cycle , the club must get to a point when theyll have to make a decision on him . Id be gutted to see him go but thats football i guees .

jack’s contribution will be showing up for the victory parade and mouthing off, embarrassing himself and the club, celebrating like he played a major role in what was accomplished despite contributing little to nothing at all. what i don’t understand is why people still think he’s a world class talent. pogba is the same age. pogba is world class. jack is not.

Unbelievable! What’s all this moalling our own player?!? Get some class and if you cannot be sympathetic to a young true Gooner because he’s being unlucky then shut it up and move on. F*cking Hell

^^ This. I’m so sick of the whinging about Wilshere. If you want to slag off our players, go over to some other site and do it.

Wilshere’s a fantastic player who’s had terrible luck with injuries. When he gets fit, he’ll be a huge boost for us. And if he gets to play for England at the Euros, more fucking power to him!

True, but part of the reason people are frustrated is that he doesn’t want to learn. He is a talented kid not doubt but he is a bit thick to be honest. He has that annoying “I’m English so I must lunge into tackles ” and also be a hard man, which I believe has helped to get him injured. He’s not as strong as he thinks he is. Just look how he clutches his legs after every tackle…He may not be getting injured at that point but it does seem that it ends up contributing to the eventual injury… Read more »

Edit: he clutches his legs even after his own tackles **

I have to agree…i think? I really don’t think you can change his style of play without some major coaching, or maybe he just wakes up one day and gets it? Perhaps a combination of both? I would love nothing more than to see Jack back to full fitness, whatever that might mean, but unless he learns how to control his impulse for hard tackles, i just don’t think he can maintain. What’s worse, is he even the same player if he makes this change in style to reduce injury? Aw fuck it, let’s install some terminator type shit in… Read more »

Yep, I’m with you two. I really don’t understand the mentality. I think some people say they like football, but they don’t really. Or they just like to moan about it, maybe.

I believe this time Jack got injured in pre-season training. Poor guy, not his fault. We should just get behind him.

What do we think of injury setbacks?
Shit!
Please don’t fine me, FA.

I think in terms of timescales and looking at the way Jack has hit form in the past we can expect him to be fit around February/March according to Wenger but I wouldn’t expect him to play at his best until the end of the season (hopefully). I just hope he recovers properly and isn’t rushed. All he needs is one injury free season and we have one of the most talented, gifted and hard working midfielders in the world. And he bloody loves Arsenal, what a guy. Future Arsenal and England captain 100%.

Like Walcott last season, we should take our time to bring him back in. We are not the only ones struggling with injury issues. Look at City this season, Kompany has suffered a ‘set back’ and Aguero has been in and out of the team because they have rushed him. It is convenient to think we can blame injuries but all teams have issues with injuries. Liverpool sans Sturridge (with a massive outlay for Firmino and Benteke) have struggled to score. Rooney injured = no striker for United who are even worse at scoring yet the media will deem to… Read more »

And lest we forget…what do you think of Spurs?

Hope jack will be back to play them and sink them.