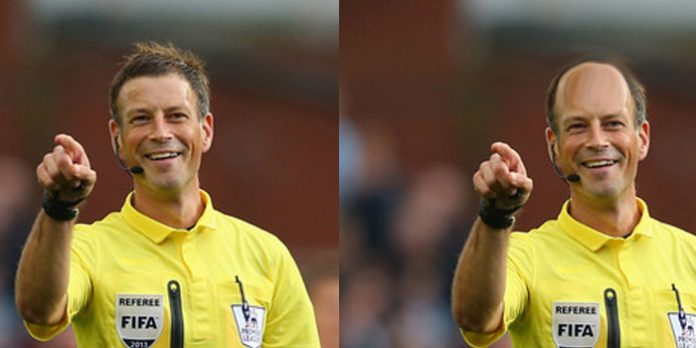 On yesterday’s Arsecast Extra, there was an in-depth discussion about bald referees versus referees with hair. It was a very important discussion, which you can listen to by clicking here (or by going to 46’17 in this week’s show).

James and I made our own conclusions, or got lost in the baldiness of it all, it doesn’t really matter, but what does matter is an email I received from listeners Kaleen and Chris who delved right into the nuts and bolts of it all.

This is what they had to say and these are their findings.

My boyfriend and I love your podcast.  We got curious about your conversation with James today about referee hair status, and went back to compare Arsenal’s Premier League results this season with referee hair type.  Some fun facts we found:

Main takeaway: We want referees with a receding hairline or bald as f*ck.

We disagreed with you and James about whether to classify Mark Clattenburg as bald.  He’s definitely got hair. This weekend’s game against Chelsea, which he is refereeing, will be interesting because a full head of hair on a referee usually means we don’t do as well.

But, considering the fact that our only loss with a bald referee this season was to Chelsea, let’s hope we can buck the hair trend again and beat them this weekend.

Now, this is where it gets contentious because clearly Clattenburg’s hair is cheating hair. Back in 2011, he announced that he was dealing with his hair loss by getting a weave.

“It’s OFFICIAL,” he said. “My hair loss is no longer a problem. The hardest decision to make is to pick up the phone and make that call, but I did, and it changed my life.”

Now, we’re not being critical, but let’s not beat around the bush here – he was going quite bald, and due to modern science and technology, he’s not. He’s kind of like a hair Synth or something.

Will that have an impact this Sunday against Chelsea? Will his true baldness shine through, or will he fight with every fibre of his being against what comes naturally and instead behave like a person who has real hair?

Only time will tell, but we’re hoping that his baldy DNA shines through as the research says this will likely result in a better outcome for us.

I wonder if there is a correlation between the opponents goalkeeper letting in goals due to being blinded from the shine of the bald ref, whereas Cech’s helmet provides some sort of magical anti glare system.

If anyone listened to the podcast on Monday, the real question that needs answering here is, who refrigerates their Ketchup… ..?

I am willing to admit that I do refrigerate Ketchup.. and enjoy the coolness of the sauce on hot bacon..

A point hair made

The exception that proves the rule.

Given his performances, I don’t think he qualifies as a referee!

What about ‘Comb overs’?

Hahaha! Some research that!
Another insightful investigation would be to compare his performances in Arsenal games when he was balding (http://www.whoateallthepies.tv/wp-content/uploads/2009/10/PA-5800529.jpg) and his performances after he “reversed” his balding!

Clattenburg, the Institute plant created to wreck the Premier League.

Thank you for going deep here. I would suggest though, that you turn the matter over to the ruthless investigators at Untold. I’m sure sir Hardly Anyone could make an absolute mess of especially Dean’s haircut and his disgusting habit of breaking the laws of nature (and footbal) by favouring any other team than Arsenal?

To be fair to a referee for once, Clattenburg is a very good official. Glad he’s taking charge of this one.

Agreed – he’s my favourite after Michael Oliver. I like how he just doesn’t take any shit

Kevin Friend is decent too.

Michael Oliver is head, shoulders, and hair a cut above any other referee in England. Some of the newer referees in the PL are quite talented too. Of the old guard, Clattenburg is pretty much the only one I rate.

Who was the guy who ref’d the fa cup tie at OT last year. Taylor was it? I liked the cut of his jib. In that game at least.

Yes actually I agree, I think he is a good referee.

Clattenburg’s problem is he is a drama queen and so there is a tendency to make games about him.

He is more competent than most of the other referees. Although that isn’t saying all that much when you are competing with Mike Dean and the fat guy whose name I can never remember.

I believe that we have players who could make a bald man jealous: Arteta, Bellerin, Giroud; frankly the list goes on. Even Wenger is folically endowed. Now if James was right to speculate that bald men seek petty authority due to their lack of self confidence (and I think a quick glance at a crowd of policemen will support this hypothesis – police have a tendency to be bald (doormen too)) then perhaps Arsenal, more than many other teams owing to the glorious hair, intimidate them leading to chaotic performances. Sometimes refs seek our beautiful, sleek approval and sometimes they… Read more »

Hairy up with the puns please! I’m sure we’re all ready to mop them up

Blogs – if you put ketchup in your cupboard… then where do you put your cups? the press?

This has really tickled me!

let’s not split hairs (pun intended)
seriously though as blog pointed out, let’s buck the hairy trend this sunday by smashing the 11 crying babies from west london