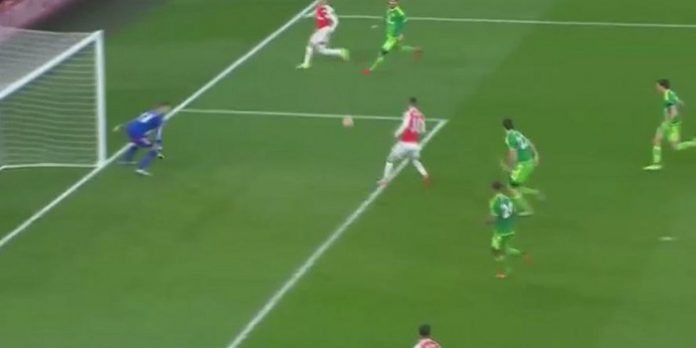 This week, Jonathan Wilson¹ wrote a piece for the Guardian which asked the question what is attacking football? Apparently the question had to be asked because Man Utd’s Aloysius van Gaal is perplexed by fans who chant “attack” at Man U when they have the ball. Van Gaal’s response will sound weirdly familiar to Arsenal fans who suffered through Arsenal’s sterile possession era:

But as we all know, the problem with Man U is that they don’t create chances: they are 1st in the League in possession but 14th in the League in shots. And as I write this they are playing Sheffield United, it’s the 74th minute, and United still don’t have a shot on target. That is just the way that van Gaal’s team’s play; they are risk averse.

Wilson highlighted risk as one of the hallmarks of attacking. Fans like to see players take chances. We want to see players try to get the ball into dangerous areas and create chaos. Because we know from experience that chaos creates goals.

Managing that risk is sort of what football is all about.  Simply put, if you’re a possession based team, and most technical teams are, what you don’t want to do is take stupid risks, such as a dribble in a dangerous area, that will allow your reactive opponents a chance to create a break away. And if you’re a defensive team, you also don’t want to take risks, such as a tackle in the box, which will leave your team exposed to the more proactive, patient, opponent. Getting that balance exactly right is impossible so managers take different stances on risk.

For van Gaal’s Man U, he wants to play high in the opposition box in order to create chances but it looks like he doesn’t trust his defenders to clean up if his team loses possession and so he’s ultra risk averse. So much so that his team won’t even take shots for fear of losing possession.

Arsene Wenger’s Arsenal used to play the super high line and bomb forward with both fullbacks. That led to teams exploiting Arsenal’s defenders and scoring on their very first shot. Wenger has learned to be a little more risk averse over the last few years and Arsenal are benefitting from that.

Teams that sit deep are risking the opposition breaking their lines in a dangerous position. But they do so while patiently waiting for the opponent to tire of their toothlessness and thus generate a counter-attacking chance — which is in itself risky because it dissolves the organization!

And even teams that press, like Barcelona did under Pep Guardiola, managed risk by only pressing high up the pitch for a few seconds after possession was lost. Every team takes chances, they all just do it in different ways.

But Wenger is and always will be an attacking manager and unlike van Gaal encourages his team to take more risks than most managers. In the match against Gumderland² today we saw the benefits and the drawbacks of risk taking as Arsenal ran out 3-1 winners.

For the first goal, scored by Sunderland, Gibbs wins the ball back but then makes a bit of a silly pass to Koscielny. Koz compounds the silliness by trying to beat his man in the stupidest area ever. He loses the ball and Lens scores.

But Arsenal’s second goal was classic Wenger attacking football and it started with the sub. Wenger wanted to bring on another player to make runs into the box. People may hate what Ramsey does, calling it Hollywood (which I will often jokingly participate in), but he’s a known quantity at this point and bringing him on was like bringing on another forward, albeit one who works a lot harder than most forwards. Wenger also encourages his fullbacks to play an advanced attacking role and Bellerin is one of the finest examples of that. So it’s no surprise that both players combined for the go ahead goal.

Bellerin picks up Pickford’s errant goal kick and immediately carries the ball forward into attack. Bellerin passes off to the midfielder and stays high up the pitch. When the ball eventually gets back to him, from Ox, he spots Campbell dropping to support, passes to him and then crashes the box. Campbell plays a great through ball, Ramsey sees everything developing and gets on the edge of the 6 (in front of Giroud who looked tired all day), Bellerin wins the footrace and crosses for Ramsey to tap in. In stats terms it looked like this (image courtesy arsenal.com)

And notice that Arsenal passed the ball around the edge of the 18 before it got back to Bellerin who then took a big risk — if Cambell can’t get him the ball back Sunderland have a great counter attacking chance down the right because so many Arsenal players are so far forward. Think about it: Ramsey is in the box, Bellerin is in the box, and Arteta is the DM with Ox his only help. If Campbell loses the ball in a tackle, they are off to the races.

But most fans love it when our team takes chances and scores.

And when we take chances and get scored on?

That’s because the player is garbage, a numbskull, he should have known better. Sell him! But three new! Sack the manager! Fire the board!

¹Author of Inverting the Pyramid (USA or UK) the seminal book on the history of football tactics. Check it out from your local public library if you haven’t already.
²I assume that the city formerly known as Sunderland is wall-to-wall carpeted with Sam Allardyce’s used gum given the fact that he casually flicked a wad of gum on the ground at Arsenal today.

Manchester City 1-0 Arsenal: By The Visuals

Sam Allardyce is a cunt

I don’t think Walruses can throw things. Their flippers don’t let them.

Can’t we fine him for littering? I’d get a £50 spot fine if a bobby caught me doing that in the street..

Sam couldn’t afford to live in Singapore. At $500 a gum toss, he’d be broke in days. Do you suppose they flog serial offenders?

As far as I’m concerned Arseblog and it’s affiliates (7am, Gunnerblog etc) are my official Arsenal channels. No one does it better. To quote Freddie: “they’re fucking excellent”

I hope Klopp does not read this!
Otherwise this is a CHEAT-SHEET.

Even our sterile possession era (which was rather short), we were a hundred times more entertaining than this Dutchman’s bunch.

Arsenalnut
Reply to  The iceman

We lacked the two things you need to break down packed defenses, a target man and speed, during that period. Yet, we still made it to the Champions League. Uh, and part of the entertainment came from wondering if one’s stomach lining would hold out long enough for us to score. ManU have speed and targets. What they lack is the motivation to take risk (wait until DeGea leaves). Van Gaal is from that Dutch school of managing, not the attacking total football school. He wants to control everything. He could never figure out how to utilize RVP, in his… Read more »

Normally, intelligent teams always keep the balance during attacks,keeping a sufficient number of players back in event of a counter attack. Usually, the defensive midfielder and the centre backs shouldn’t cross the halfway line, but if they do,they must be totally switched on defensively.

Read more like a Zonal Marking article than a By The Numbers (even the more recent version with complete sentences and paragraphs), but I liked it.

Chewing tobacco and spitting a wad. I have seen this happen so often.
The walrus has a bright future as a coach in… Major League Baseball.

i’ve sympathy for his dentist

Take a look at the video clip that Tim has included at the bottom of this article.
Fuck me, Allardyce genuinely appears to follow the flight of the gum with relish.
There’s a look of pure wonderment on his face.
He exudes all the class of the next English manager!

I like the way Manure are playing at the moment. I like it a lot. We now have only Citeh to worry about.

Sorry, off topic, but hilarious moment on tonight’s Match of the Day: https://vine.co/v/ih35ZgHL7Qt

Lol! He might have been thinking of taking on up the bum. You can see Ruud Gullit smiling too haha

That was so not Ruud Gullit. Are you Andre Marriner?

Hahaha good one! The vine was a bit grainy tho so I didn’t see clearly.

So Blogs sticking to his new year resolution of being ANTI-GRAMMARER:)

“For the first goal, scored by Sunderland, Gibbs wins the ball back but then makes a bit of a silly pass to Koscielny…” glad you brought up this point, Tim, when all fingers are pointed solely at koz for the goal we conceded. having seen the replay a few times, i’d like to add a view which is likely gonna be unpopular: gibbs did very well to win the ball back initially, but under pressure from lens released a hasty pass to koz. it was not only towards koz’ weaker foot, but one which he had to stretch for the… Read more »

last week we talked so much about Rambo being enigmatic. Thank God he is. I didnt see one high pass from Iwobi (the Arsenal way eh) he looks soo much like the next Iwobi. Love that kid. Chambo should learn from him.

I read an article on the way United form their attacks and it was quite telling. Gaal seems to have this notion that he can make the build up work via the wings only. And not attacking down the wings mind you.. Keeping possession on the wings. It’s almost as if they inverted arsenal in midfield..

Excellent stuff!…we do however really, really, really need a striker though. We’re walking this ‘no Akexis’ injury tightrope and just about staying up there. The spanking by the saints was a wake-up call.
Buy a striker.
COYG!

I bet a striker would have stopped those four goals. He would score, assist himself, and then save all four goals.
Why can’t Wenger see that?
The old man.

Thumbs down because no-one thinks we need a striker?
Come back to me if the injury curse pays a visit to Giroud, Theo or ???…oh that’s right, we have no-one. (& yes I’m aware of Alexis but he isn’t an out and out striker but ‘is’ injured anyway).

Let’s buy the world’s top 15 strikers. Then we’re REALLY covered in case of injuries. I’m sure they’d all like to come and not play!

Stuff like this is why I was hoping 7am or blogs would pick up on Michael Cox’s recent piece for ESPN about building via continuity rather than the typical fans’ preference to splash the cash. It’s not as if we haven’t bought players recently (Sanchez, ozil, Cech, Gabriel, chambers, da bush, etc) but people virtually always demand more and scoff at the idea that we might have solutions within the team already. Everyone said coq and Campbell weren’t sufficient and insisted that we buy. Theo could never be a good striker, folks insisted just before he had an excellent run… Read more »