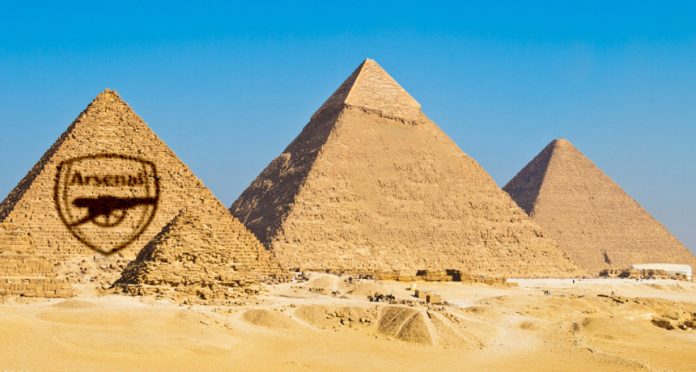 After Arsenal confirmed the signing of Mohamed Elneny, Arseblog News got thinking…have the Gunners ever had an Egyptian on the books before?

The answer, courtesy of Arsenal historian, Andy Kelly, is yes.

Citing a cutting [left] from the Daily Express on 24 August 1921, he confirms that a left-winger by the name of Ahmed Fahmy played for the reserves on several occasions.

“They [The Express] call him Sedak Fahmy. I seem to remember that the Islington Gazette called him Abdul, but it was about 25 years ago that I last looked through that paper.

“The Express gives quite a few details on him. Paterson didn’t recover from his injury but his place was taken on the left wing by Clem Voysey.

“The trial game that is mentioned was a public practice match played on 20 August. These were played at the start of the season until the early 1960s and usually pitted the first team against the reserves. Fahmy came on as second half substitute for Voysey in the “Blues” team.

“Fahmy played at least 14 reserve games that season (I’m missing about 10 line ups so it was probably more). The reserves missed out on the London Combination title to Tottenham on goal average.

“He also played at least 7 reserve team friendlies. He played exclusively on the left wing.”

We’ve also come up with a couple of others.

Swedish international keeper, Rami Shabaan, who joined us in August 2002 from Djurgarden, had an Egyptian father making him Arseblog’s favourite ever ‘Swegyptian’.

Tipped as a possible replacement for David Seaman, Rami made five first team appearances, including Champions League games against AS Roma and PSV Eindhoven, before a bad leg break kept him sidelined for quite some time. He went on loan to West Ham after the arrival of Jens Lehmann then moved to Brighton in 2005.

Supporter, John Williamson, also reminds us that trialist Ahmed Fathy played a couple of pre-season games in Austria for the first team in 2004.

Playing in defence alongside several ‘Invincibles’ we beat Grazer AK 2-1, goals from Dennis Bergkamp and Robin van Persie, before turning over Sturm Graz 2-0 with Jose Antonio Reyes and Francis Jeffers on the scoresheet.

If you know of any other Egyptian links, let us know in the comment section…

Elneny keen to impress after feeling the love

I have it in good word that this particular Egyptian can do it on a cold wet evening at Stoke.

Fact: They tea ladies are Arsenal use pyramid tea bags.

AN other
Reply to  Petits Handbag

Yeah they don’t count because the tea granules are Indian at the core. What about baklava?

arsenopoulos
Reply to  AN other

baklava is Greek buddy, as a half english half greek world oficionado I am highly insulted malaka 😉

Glad we have someone to play DM. Flaming has done his secondary job of being a DM. He can return to his day time job of being Ozil’s best mate. That being said, does anyone know what language Elneny speaks? English would be nice and should help with the acclimatisation period.

Egyptians can speak English and Arabic.Having lived in Switzerland I believe he should also speak French mate!

He spoke English at the end of his Arsenal interview. He said “If you like this, subscribe.”

Alexandria Hleb?
Ainsley Maitland-Nile?
Ozil’s a bit of a giza
Campbell’s been like a new sinai this season

I’ll get my coat…

In fact, didn’t we have some issues with Ainsley Maitland-Niles MUMMY?

I sphinxes that’s all the puns I have

Me So Hornsey
Reply to  sanogo's missed kick

Some Giza in goal called Sharm-El-Cech?

haha, these are all great! Aaron Ramesses might be my favourite 🙂

Does he speak any English at all? I am asking because The language helps with the acclimatisation period

Learned a good standard of English in Switzerland according to the Guardian’s piece on him.

According to a guardian article, his english is good.

His English is fine to judge from his twitter account. The Guardian article is well worth a read as it’s based on a long interview Elneny gave to a Swiss paper. He says that he always consults Allah about major decisions, so excellent to know that Allah must think we’re a top club, but there is just one tiny black cloud on the horizon which the Guardian, sparing our feelings, didn’t include: “Mein Traum ist der FC Barcelona. Ich traue mir zu, dort zu spielen. Aber ich muss hart dafür arbeiten.» No need to translate. There won’t be an Arsenal… Read more »

Doesn’t matter really. He looks truly mean in those pictures. I like that. That should spread the fear amongst midfielders now. Welcome to the premiership

he does speak english

I also have it in good word that he can do it in the cold wet night at Stoke.

Africa is the birth place of humankind. Now we have 7 billion Africans living in the world.

As an Egyptian gooner since 1997, it’s always sweet when you one of your countrymen joins your favorite club. Hopefully, he’ll settle in quickly and help us in such a significant season.

Aaron Rameses…Theopatra…has anyone seen a coat of many colours?

I hope he doesn’t end up on the Cairo-practors table like the rest of our midfield.

dt
Reply to  Easy as JVC

Thousands of Arsenal fans in Egypt…thats a link:)))
Also I here Arsenal have an Egyptian shareholder with a 2% stake

Better ask him whether robots and children have camel races.

Surely we’ll have to buy more under the pyramid scheme?

Just a coincidence im sure.

Almost as much of a coincidence as us both posting the same thing within a minute of each other I reckon.

If Ramsey can score a hat trick against Stoke, will that kill Trump three times? Please let it be so.

Off topic, has the curse of Aaron Ramsey started again?
Maybe it only works when he’s in central midfield.
David Bowie and Alan Rickman. Not cool.

Santi Caz is gunning you down

Every time I read Elneny my brain automatically inserts ‘Mc’ in front of it (in a Belfast accent).
I can’t help it, I keep thinking he’s our new Irish/Egyptian midfielder.
Welcome to the Arsenal, Dessie McElneny.

here is an Egyptian Lynx http://www.reshafim.org.il/ad/egypt/bestiary/lynx.htm

Didn’t we actually sign Fathy a couple of seasons ago?

Actually that was Andre Santos I was thinking of, my mistake.

You seriously found a cutting from 1921.

According to the Rosetta stone, an outfit called “Alexandria Gooners” from North Egypt had an Irish player by the name of O’Patrah (first name: Kleogh) but I have no access to documentation. This may be our very first Egyptian player from the BC era.

It doesn’t matter what language he speaks. As long as he gives it a Pharaoh’ld go then I’ll be happy

Can’t wait for the Arsenal Gentleman piece on the Liverpool draw and Elneny?

Yep, that cutting is one that I dug up.

To the tune of “Nel blu dipinto di blu”, the refrain is:

official languages in Egypt are English and Arabic,besides I guess he can communicate in French coming from Switzerland.

Wasn’t Nile Quinn from that neck of the woods?