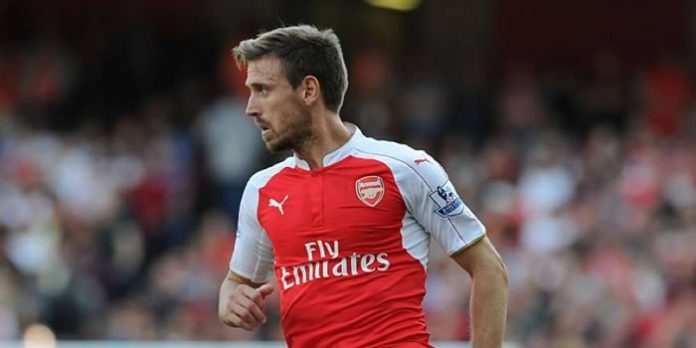 Nacho Monreal says his relationship with Arsene Wenger and the trust of the Arsenal fans were key factors in his decision to extend his contract at the Emirates.

After a rocky second season in London, the 29-year-old, who signed from Malaga three years ago for £10 million, stormed back to form in 2014 and has since established himself as the Gunners first choice left-back ahead of Kieran Gibbs.

“I have a good relationship with my team-mates and we keep improving year after year. I wanted to stay here and I could extend my contract. I would like to play here for many more years.

“The trust of the Arsenal fans is really important for us because they are helping us in every moment as we are fighting to win the Premier League.

“I met the boss three years ago and I have a really good relationship with him and I’m really happy with him. For these reasons I extended my contract.”

The defender also touched on how learning English has helped him grow in confidence.

“I’m very happy with my performances this season,” he added. “At the beginning it was difficult because I was a new signing and I didn’t speak English.

“But now I feel more comfortable with my team-mates and with everything in general so that has helped me to play better because I have more confidence in myself.”

Talking about why he likes Nacho Monreal so much, Arsene Wenger emphasised the importance of the Spaniard’s experience and modesty and the manner in which he sets an example to the younger players at London Colney.

“He’s calm, focused and dedicated,” the boss told Arsenal Player. He’s well-accepted and loved by his partners. He has the modest approach of a player who wants to give his best to the team. Everybody senses that and that’s why I think it’s important for the club to have that stability.

“He’s well-accepted and loved by his partners. He has the modest approach of a player who wants to give his best to the team. Everybody senses that and that’s why I think it’s important for the club to have that stability.

“Everyone in the Premier League would say that he has become a very strong player. Arsenal are gifted at the moment, I must say, with two top-class left backs. We have many young players. They need to be surrounded by experienced players, especially at the back.

“We now have experience at the back. Nacho is part of that – he’s a good example for the young players and we have a good bunch of young players. We have seen another one with Alex Iwobi the other day, who has shown talent. They need to see how you behave at that level.”

Top bloke and some good years in front of him, hopefully great ones for the club.

The Foxes have now been top of the Premier League table for 33 days this season, the same number of days that Spurs have been top of the PL table since its inception in 1992 (based on end of days).

The 1 person who thumbed you down must be a Sp*rs fan in disguise.

I am truly surprised. I’d forgotten Spurs had been top at all!

Completely agree. He’s been absolutely sensational over the last two seasons, I think everyone needs to remember that he had a jittery stint at CB when we were extremely short at the back and he learned from it and actually formed a semi decent partnership with per. Shows just how dedicated he is because he improved his game there and then applied it at LB. has easily been one of if not the best LB’s in the league this season. Debuchy could do with watching this guy. Stupid moaning fuck. Nacho didn’t play s huge amount when he came here… Read more »

Its also worth noting he didnt kick up a fuss about being left out of the spain squad for the world cup, that said he may have dodged a bullet. Hes kept his head down and become a better player instead.

I am sure that sounded much better in your head… That is exactly where it should stay my friend.

That chant scars
That chant wounds, and mars,
Any blooooke
Who comes its way…
Whoohoo Whoohoo

Excellent! news! His form has been just amazing and he seems like a great guy.

When I look at him, I can’t help but think of Emilio Estevez.

With Nacho on the left and Eskeletor on the right, dang, the Lucha Libra Tag Team Championship is ours!

So much to love about this Season, hope it all comes together beautifully in may…

Excellent. Best left back in the league. His progress had been incredible. Experience will be valuable for whatever happens in the next couple of years.

Awesome. I love the way he defends, and his touch and passing aren’t bad on the eye either. Top top top quality with great experience. Hope he starts for Spain this summer.

Love Nacho, and more so our back line. I feel like they go unnoticed how much work they put in this year. And Super Cech in goal, they can faulter a bit and have Superman save them. What a time to be a gooner!

Gotta love this guy. IMO that tough stint filling in as a centre back helped turn him into the defender that he is. Great all round.

You make a good point. By playing there it must have helped him to understand the protection his centre backs need. Similar to how the boss says playing on the wing shortens a midfielder’s technique. It improves their overall awareness and allows them to appreciate what players in other positions require from their team mates.

Agree, @ Alexisshorts. The stint at CB where he just grew into the position must have helped build his confidence. Very sure-footed with ball skills to boot. Good news, his extended stay.

Great news. He’s just got better and better. Fully deserving of a new contract and his place in the starting line up. Nice to see an end to the Bilbao rumours too, not that I thought they were really true, given they only sign Basque players.

Excellent defender and handy going forward too. We have the best fullbacks in the league at the moment, by far actually IMO. Problem is he has Jordi Alba ahead of him for Spain so it’s probably going to mean Nacho plays second fiddle.

Who wouldn’t love the Nacho? Debouchy should take a leaf from this guy and Gibbs.

What a player. Didn’t we only go after him because Santos was so hapless for Arsenal?

We went after him because we had no LB when we did. (Gibbs was injured, 12/13 Jan window). 13/14 saw him get curbed a bit due to Gibb’s good form, and now we’re looking at 1.5 solid seasons of Nacho Dominance.

I believe we planned to sign him that summer anyway; was brought forward because of the LB injury crisis.

Everyone wants to stay. Cool.

When I see the players other clubs have signed who just drift into obscurity and compare how so many players are developing under Wenger , you appreciate what a great club we are.

I wanna be a Nacho man.

Our very own RoboCop – protecting the innocent, upholding the back four:
http://footballerswholooklikeactors.tumblr.com/post/45150663367/nacho-monreal-peter-weller-robocop

That’s that sorted, then. Excellent news.

Nacho really demonstrates the importance of patience with new signings, especially from abroad. When we bought him those who know Spanish football said we were getting ourselves an excellent player. But it wasn’t just berks like Piers Morgan (the only “Arsenal fan” inside whom there is a Chelsea fan desperate to get out) who belittled him as he took time to settle in English football– not that his performances were even bad, just that he slowly developed confidence and consistency. The best left-back in the league is a player whom many wanted replaced in 2014 and even 2015. It’s funny how… Read more »

Nacho has been outstanding. Another gem (like Gabriel) unearthed by Wenger against the advise of the media to spend big in the position. That said, this 3 year extension will afford us leeway to find his replacement in due time as Gibbs is also getting on at 26yrs plus is injury prone. We need to start looking for the next Rback for Arsenal now. As far as all this nonsense regarding Elneny is concern, do you really think it wise to put in a player who has yet to acclimatise with the league and his teammates? Honestly I wonder some… Read more »

In addition to 5 crucial intercepts and a block, Flamini also contributed a forward pass that led to the massive Giroud opportunity plus he kept Bojan on a tight leash.

Seems like a great, humble guy. His interview with arseblog news (I think) was truly one of the best sports interview I’ve read

Surely the lad has got to be in with a shout at making the Euros squad. In fact so does Bellerin.

Regardless of where we finish this season, monreal deserves a spot in team of the year. Which is a huge testament to how far hes developed at the arsenal.

Whinge like a coq and it can all go per-shaped, nacho gibbs his all and gets a cech.

Nacho deserves a call up to Spanish national team. If we win the title, he will have played a big part and would deserve to go to the Euro’s this summer. Vamos Nacho!!!

Since his stint as back up centre back, which wasn’t great, he has been fantastic. Maybe that stint has helped make him the best left back in the premier league, and one of the best and most consistent Arsenal players for over a year now.

One the things that just makes me admire Wenger more as the Arsenal boss is how he looks beyond a player’s ability on the field. Wenger looks at each player’s character and how it can influence the dressing room. Top topics topper bloke. Both Wenger and Nacho!

Our Nacho Unreal, GET IN!!!

His improvement has been phenomenal. Such a great example to youngsters and senior players alike. When people start performing above expectations teams can really push for titles.