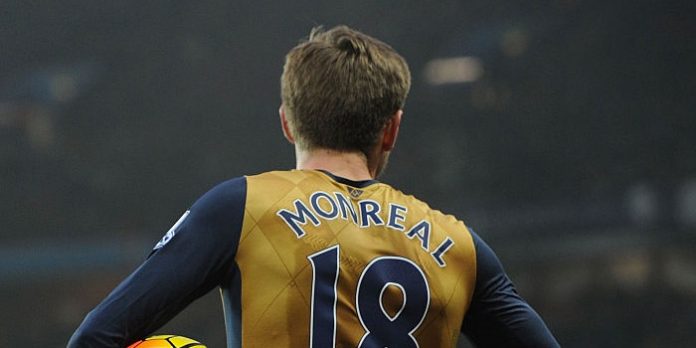 As we told you last week, Nacho Monreal has signed a new long-term contract with the club.

The news was made official this morning, and the Spanish international’s stay has been extended until 2019.

Speaking to the official site, Arsene Wenger explained his reasoning behind giving him a new contract.

“He is a very important player at the club because he can play left-back and centre back,” he said. “He has the consistency in his performances that is requested at the top level.

“Overall, his attitude has been absolutely fantastic on a daily basis since he arrived here. He’s 100 per cent committed and I think as well he has always improved since he has arrived and has shown that in many big games as well.

“He’s calm, focused and dedicated. He’s well-accepted and loved by his partners. He has the modest approach of a player who wants to give his best to the team. Everybody senses that and that’s why I think it’s important for the club to have that stability.”

Since joining the club in January 2013, Monreal has played 113 games, scoring 2 goals, and this season has established himself as the best left-back in the Premier League.

Get in Nacho!!
Definitely my most improved player for the last 2 seasons!!

More improved than Coquelin and Joel Campbell? Two players who were heading out the door 18 months ago.

Bellerin improvements are behind Monreal, but the thing about Bellerin is he’s young and will improve as he’s far from the finished article, that’s a win-win

More improved than The Jeff, whose goals, assists and all round awesomeness landed us the treble last season?

oh sorry, I’m about 4 years too early with this comment.

Great guy, thought he was dodgy at the start but after playing a few games at centre half has been a rock at full back.

Particularly impressed by his attacking as well as his defence, he has done some great assists and the odd goal, as well as being a diversion at other times for Sanchez to turn inside and have a shot.

Looking forward to the next few years with Nacho (glad he extended his contract and didn’t cash in his chips) battling it out with Gibbs.

Gunnersaurus is my spirit animal

Left back sorted then. An integral part of the best back 4 since the invincibles

Another player that Wenger has turned into a world class player.

Brilliant news all round.

Monreal was great before we signed him, think he struggled to adapt for awhile

Contrast the fate of monreal with that of debuchy. One chose to buckle down and fight for his place from his younger counterpart, the other chose to whine. Very happy for monreal

To be fair, one also was used to being selected for France, but has suffered a horribly unlucky string of injuries and has fallen out of that picture with Euros – and the latter stages of his career- coming up. I prefer club before country when it comes to Arsenal too, but I understand a bit. Time is not on Debuchy’s side right now and he wants to get his starting career back on track.

That said i’d prefer we have a solid 2nd option specialist RB lined up before letting it happen.

His time at centre back did him wonders in hindsight, who could have known??

You say he’s scored only 2, but one of them was that fabulous goal vs United in the FA Cup, so that counts as a lot of goals in itself

Wasn’t the other one a winning goal (or what turned out to be one) against Swansea?

Although widely speculated last week, great that’s finally officially. Ozil, Sanchez and even sometimes Koscielney (from a defensive perspective, obvz) may get the plaudits, but Monreal has been absolutely sensational this season. Rarely gets beaten by his man, always provides cover for Kos if he goes on a run, senses danger like no other. Best LB in the league and it’s not even close, one of the most underrated players in the league, no fuss, no bother, just gets on with his game

Totally agree, as a fantastic (in my dreams) left back myself I always pay particular attention to his play. He always busts a gut to get back if we lose the ball in the attacking third. He is always 100 per cent committed.

A long-term contract taking him up to age 33. Truly this is a new era for the Arsenal

We have the best left back in the league. Full stop. Future club legend. Locked down!

Will always love him for this. Also a warm reminder of Oxlade-Chamberlain’s ability during a low period. Great to have Nacho on board for another few years.

However, probably not as much as I love Welbz for this: https://www.youtube.com/watch?v=YobYEkRNdzE

Nacho is unbelievable! I was thinking that last match against Stoke after he made an unbelievable interception in the first half. He has improved a lot in many aspects of his game since he first came. For example, the ball he headed out late in the second half was going to Walters and could’ve ended in the back of the net. A couple of years ago he was terrible in the air. He also had a great match against Liverpool and is one of the most important players in our back four. I am really happy he signed a new… Read more »

THE MOST CONSISTENT PERFORMER.
MR. CONSISTENT,
He is our Nacho.

Top man and a great thing to have his signature again.

I like how he closes down space to block crosses more than in previous seasons. his understanding with ozil and alexis is getting better.
great news.

Flamini and Chambers injured while shooting for Dude Perfect. Arteta dislocates collar bone while sipping on juice as he was watching the Dude Perfect Shoot :S

That spell at centre back really helped nacho regain his confidence and now plays like how he did for malaga except that he is missing a couple of goals.

Probably the best left back in the league at the moment..

“Loved by his partners” playa

Best DEFENSIVE left back in the world atm. Who’s better than him? I can’t think of a single one.

Don’t think any of us had heard of Nacho Monreal when Wenger signed him two years ago, for only £10mm.

I’m happy for him. I love the way he transformed himself into the most consistent left-back in the world. Even when the team perform badly, you can always single out good performance from him. Lately, with little or no cover from Walcott, he’s still doing well. That for me is the definition of consistency. I hope Gibbs do the same thing. Apart from that, why are many pundits, bloggers (not referring to arseblog), writers, and whatever they call themselves think Patrick Vieira is the DM in the year of Invincible or even before then. Every article about us missing DM… Read more »

Great news Nacho! Congratulations and very happy to see your career continue at the Arsenal!

Also brilliant in the air for his size,rarely loses a header

Brilliant player with an exemplary attitude.

Fantastic news. Nacho’s head and shoulders the best left back in the league this year. He’s consistently excellent, game over game, and even an off day for him is as good as the best anyone else has to offer. Really pleased to have him locked up for another three years.

Toast with Butter and Jam

my sister can’t understand why other supporters won’t join in her adapted choruses of the village people’s “nacho nacho man”. personally i believe that “nacho mon-re-al” would be better adopted by the terraces, i just don’t have the gumption to start such a chant…

So consistent defensively and has definitely improved his attacking game. For me the best LB in the league, no question..this would bring him up to 33 and we’d have got his best years..Lovely!