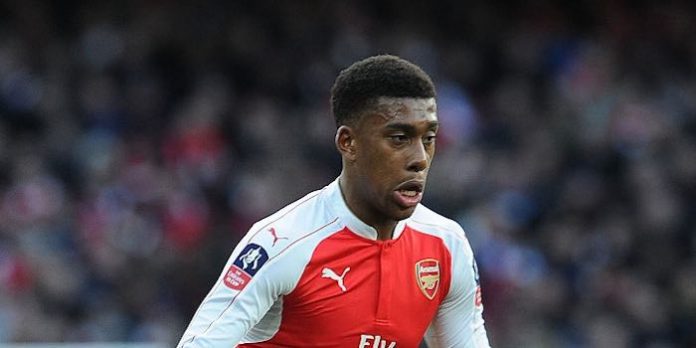 With the transfer deadline looming, it’s not unusual for Arsenal to send some young players out on loan in the second half of the season.

Ordinarily, Alex Iwobi – given his relative inexperience and age – might be a candidate for such a move, but having impressed against Burnley, and done well in his appearances so far this season, it seems Arsene Wenger is keen to keep the 19 year old around.

With reported setbacks for Tomas Rosicky and Jack Wilshere, and with Theo Walcott struggling for form, Iwobi provides Wenger with another option in his squad, and the Arsenal manager has been impressed with what he’s seen so far this season.

“His decision-making is spot on and his awareness is very interesting,” he said. “He’s a boy who, two years ago, not many would have said: ‘This will be.’

And Wenger seems likely to keep him with the squad for the rest of the season.

“I have a hesitation about loaning him because I think this guy could very quickly play,” he continued.

“I think it would help him a lot to see the quality of the players around him. He can play on the left, on the right, behind the striker, even No9.

“He scores goals in training. He’s one who, when he was a kid, could pass you by if you don’t watch well in training but I personally like this game.”

Iwobi caught the eye in the Emirates Cup last summer, and was kept around when Chuba Akpom was loaned to Hull. So far he’s made 8 appearances, playing in every tournament Arsenal have been involved in.

We like the look of him too, he’s clearly got some talent, and hopefully we’ll see more of it before the season’s out.

Arsene certainly seems to think so.

To me, “very interesting” feels like the highest subliminal compliment he could pay Alex.

He’s a prospect there’s no denying it. And what better player to ply your trade under than our magician Mesut?

It is good to see another promising youngster come through. He looks fantastic. What is particularly good about it is that he can now learn from some world class players who set a great example. This is something out youngsters missed out on a bit while we were repaying the stadium debt. Exciting times ahead for the gunners.

The boy is special and has got a big future

Very good technically, very tidy, very intelligent, no showboating, no hollywood flicks and it would appear, no big ego.

Exactly what this Arsenal squad needs coming through the ranks. An unspectacular yet quality thoroughbred.

Naija Gunner
Reply to  Me So Hornsey

Exactly, and Perfectly stated. The boy is phenomenal

Like Arséne (kind of) says, the main thing that stood out against Burnley wasn’t his agility or skill or technical ability, it was his intelligence to know which decisions to make and when to make them. That’s pretty rare for a teenager and it’s probably the skill that gives you the best chance of making it at the top level. Compare him to Dan Crowley, for example – Crowley undoubtedly has better technical skill and great vision, but judging by his time on loan he currently lacks that intelligence to give a good pace and flow to a top-level attack.… Read more »

Lol Crowley has undoubted technical ability.. Erm no no he does not but thanks for that useless input

And he can do a great Phil Jones impression too by the looks of that picture.

Amazing how Wenger can so accurately with his own “English” at times depict a player like here when he says….

“His decision-making is spot on and his
awareness is very interesting,” he said. “He’s aboy who, two years ago, not many would have said: ‘This will be’

QLTM (know these things), feels like Monsieur is in my head.

Through the middle he’s seemed very tidy. Hopefully he has very bright future ahead him! It’s been a while since a youth player has come through the ranks.

Please clarify what you mean there because just last season we has two academy graduates in Coquelin and Bellerin cement starting spots with the first team.

They were bought in at ~16. Iwobi has been there since he was 8.

Really, Jack hasn’t been that long of a time.

He is one for the future. Looks much more younger and Nwakali and Chukwueze.

This likeness had better translate into more minutes with the team…. we can’t keep having Theo nicking a living

“He’s one who, when he was a kid, could pass you by if you don’t watch well in training” – that’s the reason Wenger has been able to stay at the top level unfazed by others buying their way to finish above him because they can’t last long!

No team/manager has spent less than Wenger and finished above him in the league, many spend much more but still finish below.

I had a Nigerian friend and also a fellow gooner who would never stopped talking about Jay Jay ochocha and ofcourse he was huge (I mean really huge) Kanu fan too. He always used to say to me that Nigeria is full of talent. All they need is someone to polish them and a government to support them.

I bet he is looking forward to seeing Iwobi, Nawakali, Chukweze and Iheanacho possibly being regulars in PL in few years time.

Love
Reply to  Alexis is Back

Jay Jay was one of the greatest. .sad he wasn’t as recognised as should have been.

Bonus for making it through a Joey Barton appearance with his knees intact and not sent off. I’d say he’s ready for a few more appearances!

John Terry shall retire, suffer excruciating pain for no obvious reason and dissipate into nothingness. This will be.

The reason for the excruciating pain will be very obvious, it’ll be because when he moves to MLS and plays in Vancouver I’ll sneak into his hotel and smash his fucking knees with a baseball bat.

On a more serious note, didn’t notice the lad too much during the match so just went back for a second look having read Wenger’s comments, and yep the boss nailed it – he doesn’t do too much to catch the eye in the flow of the game but just seems to do everything well and make the right decisions. Plus being pretty athletic and strong for his age can’t hurt either. Seems like we had a few kids with this kind of talent that didn’t fulfill their early promise, some due to personality issues or lack of hard work… Read more »

Gonna disagree a bit. Iwobi always catches my eye. He rarely gets dispossessed. He fights, like Campbell, to retain the ball when tackled. I love Campbell, but Iwobi looks smoother to me and, weirdly, stronger on the ball. He also does not have the handbrake on, ever. He runs at defenders and tries to make a difference. He does not play safe passes though he makes good passes. From this I take that he is confident.

I want to see more of the kid.

Seemed like a great bloke in the interview, too.

Really I personally wonder this guy his creativity and passion that he made in the field. The professor should give chance so that we will have the next canu in Arsenal football club. Even Gnebery should stay in arsenal rather than out for loan.

He has that Ozil like purpose to his passing. Not once has he been on the ball and I’ve thought “fucking enough touches already, PASS IT!” The boy just gives the ball when it needs to be given. He has a good burst of pace when he needs to use it too.

I was of the mind that we’d need to look to the market to replace rosicky but if he keeps this up we’ve found the solution internally.

Is there any chance of him playing the No 8 Centre Midfielder, or developing into that position?

Good stuff from Alex Iwobi!
Hopefully, we will leave a bigger mark at the club than another bloke who used to wear his socks low (also named Alex)

Now, where is that Jeff guy?

He seems very composed in the final third. Hope he gets more game time this season.

This one will be a great striker for Arsenal. Wenger is grooming him to become the best.

Lets hope Wenger can turn him into a striker. He already has more composure and thinking than Giroud and Walcott combined. He may battle to get gametime in other positions

Great compliments from Le Prof. Pray that he fulfils the promise.

He just need to take ozil and cazorla as his mentor

He is better than Theo was at that age..

Wouldn’t mind seeing converted into a striker tbh. On the wings we have way too many players coming through or on loan; Wellinston Silva, The Jeff, Gnabry, Maitland-Niles has arguably been our biggest loan success outside of Toral. In CM/AM, we have the aforementioned Jon Toral arguably our most successful loanee this term, Zelalem, Crawley and just a ridiculous number of CMs at the academy. However he has all the qualities to be a CF in the mould of Van Treachery (without the…you know, treachery). And in terms of competition, we only have Akpom (whom I’m still not 100% convinced… Read more »

Is there any chance for him being turned into a striker?

If the Ox had his touch and composure, he would be among the best players in the league. Two fantastic performances in the cup. I don’t know where he will end up but he certainly has something special about him.