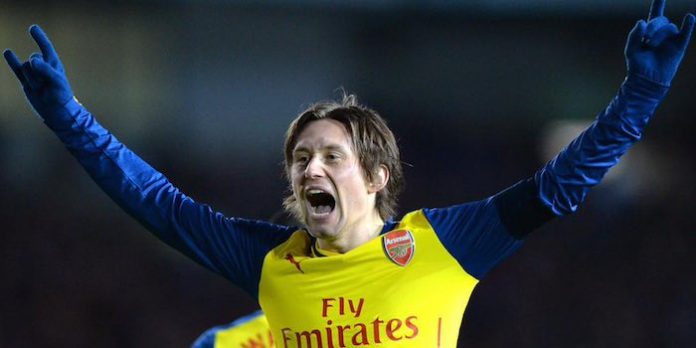 A clearly emotional Tomas Rosicky has described his latest injury as heartbreaking, as the Czech international’s career in North London looks to be heading for an ignominious end.

After picking up a thigh problem in his 20 minute cameo against Burnley last weekend, Arsene Wenger was reluctant to confirm the 35 year old had played his last game for the club, but such is the seriousness of the injury that it would be a surprise if he made a recovery before the end of the season when his contract expires.

Speaking to Arsenal Player, Rosicky said he was warmed by the reception he got from the fans when we went to warm up. Having not played since last season, he was keen to repay the support until the end of the season, but the thigh strain put paid to that.

“Since the moment I started to warm up on the sidelines it was exceptional,” he said. “Honestly, I had tears in my eyes after such a long time being out.

“I started to warm up and the reception was unbelievable and I will never forget it. Obviously … the feeling I cannot give the fans anything back at the moment is frustrating.

“As I said it is heartbreaking I can’t give them anything back after the reception they prepared for me, but in life things will be thrown at you and you have to deal with it.”

There was no sense that he himself was throwing in the towel, and he sounds determined to make another appearance.

All we can do is wish him good luck, and hope that we do see him in red and white again.

I am declaring war against the injury Gods!…

Diaby, Rosicky ( and hopefully not Wilshere). We have had too many players not able to give much for the club and being very frustrated themselves.

Will be great (next season) once we can have a full squad without long-term injuries.

There is no reason why we still can’t be great this season, have some faith, we’re fighting on all fronts still and it’s February!

I didn’t say that we can’t be great this season.

I did say that it will be great to be without long-term injuries.

You Rozza will never have to worry about the reception you will get from the Arsenal faithful.
Just your goals against Sp*rs guarantees you that..

My all time favorite Arsenal player. He brought me so many smiles. Stay strong.

Wow, he’s hardly played or won anything in comparison to many other Arsenal players.

I’d go for Henry, Bergkamp, Vieira, Charlie George, Liam Brady, Adams etc in front of Tomas, however much I like him.

Sorry, my mistake, he is the greatest!!!

Sorry, he’s not the greatest!!!

I’ll get it right eventually.

I never cared and never will care for any titles or trophies. Football is not about that, in my opinion. His movement, vision, technique and overall abilities are amazing. The way he plays the game is so specific. Love him.

Mine to this day has always been the Romford Pele, but it’s hard not to like Rosicky, I for one hope he stays just that little bit longer.

Can arsenal renew his contract on pay by play basis? Aint giving up on mozart.. He is 1 true professional.

This guy sums up Arsenal. Such great talent and skills but equally great setbacks.

I shouldn’t have watched that video. Now I’m sitting in my uni cafeteria ready to cry.

We love you Rozza!!
Just remember that.
And Get well soon.

I am close to tears myself as I read this. Sadly, we can’t select the things that life throw at us. I am hopeful he plays again, but three months out, it’s hard to be convinced he will. My deepest desire is that he has a cameo as we seal the title at The Etihad in the penultimate week of the league. What a fitting end to Tomas that would be! I dare to dream. At least that shows you I have not thrown in the towel just yet – there is nothing I have seen in City, Leceister and… Read more »

Gonna miss this little guy! At no fault of their own there are a few players that I really wished stayed injury free for a bit longer. I think they would have made a real difference to our clubs history over the last 9 years. Rosicky, Diaby and even Van Persie (f*ck him anyway). People moan about getting rid of players like these due to their injury records, but Arsene knows, and we all do to, they’re special players. Saw some comments this week from people calling for jack to be sold, that needs to stop instantly, he too is… Read more »

He is loyal but he is paid well, too well and if he continues i wish him the best of luck as long as he is not taking space up at Arsenal.

Much more polite than anything I was inclined to say.

Give the man a testimonial whatever happens, feel so sad for him either way. Fantastic player

I don’t think I’m able to clearly express how dismayed I am at the prospect of not seeing Rosicky play for Arsenal again. I just hope we keep our momentum going, pick up some silverware, and hopefully Tomas will be able to play at least one more time through all of this.

What a player. A kind of Pires/Wilshere amalgamation. Please get well soon enough to grace us with your class again Tomas!

Could have been a great player for us, but for injuries. An all round good bloke too. Sadly, as a club and a business we should not renew his contract. His wages could be split to fund two younger, ambitious players who will be able to play regularly. Could be offered a coaching role?

Ten years you get a testimonial, hope he gets one. Well deserved and one I’d love to be at to pay some respect to a true gent.
Those goals against Spurs. It was love.

Jus look at that celebration nd the symbol in his hands…..Rockstar on nd off the field….get well soon Rozza!!!!!!

So Rosicky to come on from the bench in the CL-final and score the winner in his last game for the club?!
Yeah I know….just let me dream for a few seconds

The saddest part is if by some miracle Arsenal managed to win the EPL, Rosicky might not be eligible to receive a medal because he didn’t play the required number of games. What a week to be an arsenal fan.

The rukes have changed and he doesn’t need to complete a number of games anymore, so if we can get past this not scoring blip and win the thing Rozza, Mikki and Flam could all get a medal. They’ve earned it over the years and that’s what I’m hoping for.