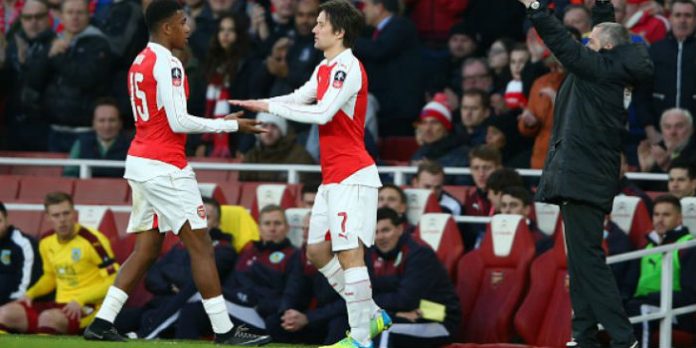 Arsene Wenger says Tomas Rosicky will not require surgery on his latest thigh injury, however, the midfielder will be out for up to three months.

Confirming that the 35-year-old midfielder has suffered a partial rupture of his thigh tendon the boss revealed he and the coaching staff are doing their best to support the ‘shocked’ Czech international.

“I hope not,” responded Wenger when asked if Rosicky has played his final game for Arsenal.

He continued: “His injury is quite a serious one; a muscular injury. The good news is he will not need surgery, it’s a partial rupture of his tendon.

“How long does it take? Two months to three months, we don’t know.

“We are all of course, shocked and he is the most shocked.  We have to be patient and hope that it is not his last game.

“I don’t want to be dramatic, he suffers enough at the moment. I’m more with a support attitude rather than anything dramatic.”

Rosicky was given a hero’s welcome when he made his comeback against Burnley in the FA Cup. As was confirmed earlier in the week, he suffered his problem just three minutes after coming on as a substitute but chose to stay on the field as the Gunners, without any further substitutions available, defended a 2-1 lead.

It’s unlikely Tomas will be handed a new contract when his current deal ends in six months. The latest blow means he faces a race against time to be fully fit for the final weeks of the season. There won’t be a single Gooner willing him anything other than a speedy recovery.

Tomas – sad stuff all round. We could have had a new player who could make a difference to our season, he could have played his last game for us and it must have been soul-destroying trying to get back to the team only to get injured.

Considering his loyalty, attitude and service to the club, I call for his continuance and association with the club in suitable role…

..he absolutely deserves that as a recognition from all of us.

Loyalty?! What Loyalty? Which club would have seriously bought a player who even before the season started had played only half of the league matches since his arrival 9 years ago and miss the other half through injury?

Only this club under this manager would a player which such a terrible injury record been kept for so long and to say he’s “shocked” that Rosicky’s injured again is incredible, there’s nothing shocking about Rosicky being injured, it would be shocking that he was fit!! Wengers clearly got early stages of dementia if this is a surprise.

The irony of somebody commenting about loyalty and fitness from players when they clearly haven’t got a jot of support to offer in the other direction.

There’s no irony what so ever, I’ve supported the club for more than double the time than Rosicky been at the club but that doesn’t mean I have to agree with everything they do.

For his defense, loyalty to the club doesn’t mean loyalty to a particular player, especially if said player can’t be depended on (not saying that’s the case for Rosicky).

I honestly don’t ever care what ‘John C’ has to say whenever I see his comments. Run along troll.

Why don’t one of you answer the question I ask and tell me which club would have taken a player who’s made 107 starts from a potential 366 matches?

Why don’t you answer the question?

Can’t imagine van Persie was too far off of that when United signed him, that didn’t turn out so badly for them did it.

Again, why don’t you answer the question?

Van Persie was 29 when we sold him not 35 and i personally don’t have a issue with selling any player as long as they are replaced with another of equal quality.

What was that all about?..loyalty doesn’t literally mean choosing other club over ours..his commitment to help the club playing or in the dressing room count..

Rosicky is employed to play football not a psychologist so no it doesn’t count.

And yes, loyalty literally does mean choosing our club over another, loyalty means allegiance, faith, faithfulness.

Deserves a testimonial this summer when he’s fit

We can definitely get that game organized early preseason as some sort of competition for players like Wilshere, Welbeck and Santi , maybe even Mikel as a joint testimonial for him and rozza if he moves on to coaching with us! Players that will go on loan again (likes of Ainsley-Maitland Niles etc) can be given a run out in our shirt again. Maybe we should invite Dortmund for it? I’m sure they still have fond memories (ask Reus) 🙂

He just can’t catch a break!
Get well soon!

I think he caught too many breaks – that’s the problem!

Can we give him a testimonial if he does leave us? He deserves it. Absolutely love the guy.

Nope, the club will be too busy having a pre-season trip to Mars to capture some ‘glory’ hunting Martians on to the gravy train to do anything as traditional as a testimonial.

Gutted. I was hoping he could make it to spuds away. Big loss.

I hope we win the title for Rosicky. A cameo appearance at the Etihad where we are crowned champions will help wipe out every frustration he is feeling right now.
Every league game from now should be viewed as a cup final. We can win most of the remaining games if we are focused. We can do it!

Such a skilful player. Thank the Lord or whoever he never joined Liverpool.

AFC is a business. I don’t understand any business giving a depreciating asset a 1 yr contract extension. We’re becoming a Dad’s Army Team, Rosicky, Arteta, Falmini, Mertesacker, dare I say it Carzorla. Wenger should have started rebuilding the squad last summer. He won’t change 5 players this summer, 3 out maybe and 2 in 2017. Don’t get me worn those players have worn the shirt and put effort in, but is Wenger paid £7m pa to be sentimental, e.g. giving Wally the captaincy v Chelski. It’s all to cosy lovey dovey at the Emirates and it needs a big… Read more »

A slight rupture of the tendon? Does anyone remember him taking any knocks. It seems odd that a run out after a warm up can result in something like that, I mean does anyone rupture a tendon on the treadmill down the gym or chasing a bus? I don’t mean to be churlish, because I honestly love Rosicky to bits, an inspirational player. But I remember Tim Stilman either here or somewhere else saying we never replaced Bobby. When Thomasz was bought I honestly thought we had. To think of what could have been is really heart wrenching. But the… Read more »

Get well soon Our dear TR7

There are a lot of very mean people on this site. Since joining the club, Rosicky has been a model embodying all the sporting and human qualities anyone could look for in a player. Most of the crowd, and all true Arsenal fans recognized this when he took the field and received such a heartwarming ovation. It is just sad the this injury is marring the end of his career. The negative comments on this thread seem to reflect an obnoxious sense on entitlement by self-styled “supporters” who contribute nothing to the club and are completely lacking in the qualities… Read more »