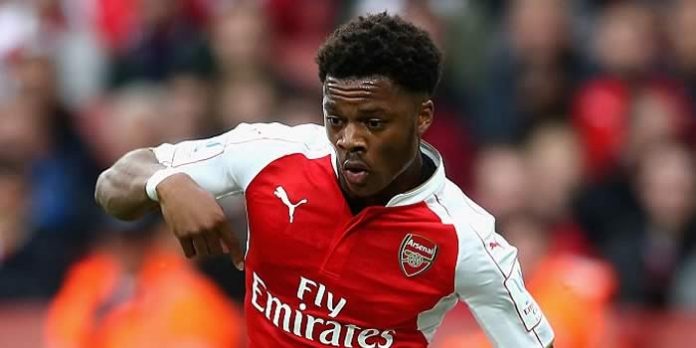 Chuba Akpom says he’s hoping he can follow Alex Iwobi’s lead and make the step up from Arsenal’s Academy to the first team.

The striker, who has been on the Gunners books since he was six-years-old and is currently on loan at Championship side Hull, came through the ranks with Iwobi and says he’s ‘buzzing’ that his close friend has enjoyed such a stellar rise this season.

Speaking to BT Sport ahead of England’s UEFA European Under-21 Championship clash with Switzerland, Akpom spoke of his determination to take his chance when he returns to the Emirates.

“It’s always good to see young British talent shining in the Premier League. Alex, I grew up with. He’s like a brother to me so I’m buzzing for him and buzzing for his progress.

“I just tell him that hopefully next season it’s me and him playing together. This summer I’m going to work as hard as I can and pre-season do the best that I can.

“It’s been a long time [at Arsenal],” he added. “I’ve enjoyed every minute of it. Arsenal is a good club and I’ve always wanted to play in the first team so I’m looking forward to going back at the end of the season.”

Akpom has scored seven goals in 35 appearances for Steve Bruce’s Tigers this campaign and will likely be given a chance to play in Arsenal’s tour of the US in July.

Akpom is still just 20, he can still make it. Hopefully he now focuses more on improving his allround game and working for the team. He’s been trying too hard to impress and has been too selfish.

For me, its simple. Replace Walcott’s slot in the first team with Akpom. That in itself is a step upgrade

Could not agree more, and he will deliver with quarter of salary too.

The amount of hate for Walcott these days man… He’s statistically our second most important player (only behind Ozil on GoalImpact) and yeah he’s had a torrid time of it this season but getting rid of him is just silly.

What statistics are you referring to Chris? Don’t mean to sound rude, but would just like some clarification on this.

Please refer to GoalImpact, like I said. The system determines an individual player’s valuation to a team’s overall goal difference.

Walcott’s score is around 190, an incredible rating. Ozil for comparison is around 203, which puts him among the top 3 in the world.

Walcott will score important goals here and there. There is no doubt that on his day he can be one hell of an asset. However, his performances do not justify his salary. More importantly, if we as a club are going to win titles, if we are going to progress, we must start getting rid of players who are not performing and give those that are showing potential an opportunity or else we will hinder their progress.

We should replace Theo, but probably not with Akpom. Should be given chances but not straight to the first team as regular.
Many changes welcome, some young blood will be good for the team.

Theo has been injured twice in a short time! He needs time! He was great against Hull, he’ll get there!

Good for him. Hope he comes good.

To shine as striker at young age not happing more frequently. He play deficult position than Alex uwobi.need to be patient ,he can be really business at the age of 23.if he want to break in first team he should practice more as wide player than striker

Start by Choosing Nigeria over England. There’s something about the England national team that ruins youngsters.

They are young. I say give ’em 4 more years and most of them will have disappeared. Just when they are about to make the next huge step, they fade away. Walcott is case in point. Adam Johnson too. Could be the hype and too much fame and expectation that gets to them. I though think that Kane might do well for a long time.

Akpom needs to focus on scoring goals for Hull, that interview quite disrespectful to them, only interested in putting in the effort in the summer and pre-season. It’s well documented that his attitude is a problem and seven goals in thirty five appearances isn’t nearly good enough. He’s another that talks the talk but needs to walk the walk, I don’t think he should be anywhere near the first team and he has a lot to prove.

Why so many dislikes? I mean.. are people here so blind to see the truth and do the fn math?

I wanna say he can make it, but I have my reservations.
Afobe was an academy legend, only a year or two older, and still couldn’t make it.

Biggest challenge of all his the academy competition. Madvidivi is arguably more talented, but of them all, it’s Malen that has the “it” factor. He’s something special.

If Giroud can make it at Arsenal I don’t see why this guy can’t.

anyone see Vardy tonite?
no fuckin nonsense and a work rate to match.
and THAT goal??!!!

Dont expect Walcs to get a look in at the Euros

This is strictly an Arsenal blog pal. Stay on point. No silly talk about Leicester or (Re)Tardy here!

B52 -lord bomber
Reply to  ger

Vardy reminds me of that Peter Kay advert where those footballers are doing keepie ups in a circle and it comes to Kay who hoofs it in the air saying ‘have it’. His direct no nonsense approach l find refreshing.

That’s funny, he reminds me of one of those old fashioned traditional, ignorant racists.

It wouldn’t be necessary if Wenger had kept Podolski. Selling him with no replacement was a big problem for me. Not a team player, nor defensive enough? So use him from the bench. Because he could bloody well finish

At 3:44 you will enjoy Mr Podolski pushing Philipp Lahm over (no foul) and smashing it past Herr Neuer at the near post. Who’s going to do that for us next season?

Not Akpom, not yet anyway.

rather have podolski than walcott, the end.

Surely he worked at least as hard for the team as Walcott. Nowhere near the same pace, but much more effective in front of goal. Walcott has only used his pace effectively about 3x in 10 years, so I don’t really understand why there’s still belief from some that he can add another dimension to our game… He might, but it’s far more likely that he’ll run around in a distant corner of the pitch, or give the ball away needlessly outside of our penalty area.

Our squad looks like it’s going to be packed full of competition for places next year. COYG