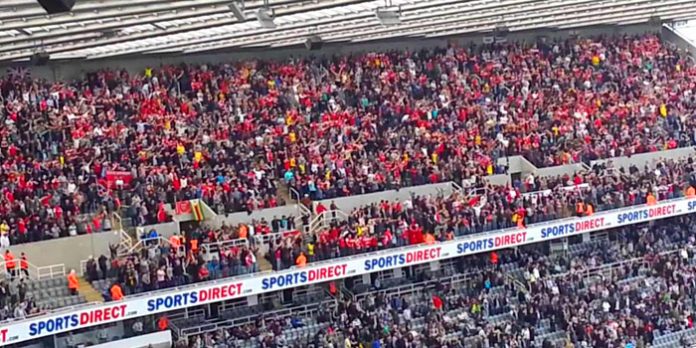 It has been announced that Premier League clubs will introduce a price cap for away tickets from the beginning of the 2016/17 season.

A maximum ticket price of £30 will apply to all away tickets, and the Premier League outlined their reasons for this in a statement (which can be viewed in full here). Speaking specifically about away fans, they said:

They continued, “At their last meeting (4 February 2016) Clubs unanimously agreed that more should be done to help away fans and, after consideration of a range of options, have now decided to introduce the new £30 maximum price for away tickets.”

For their part, Arsenal have released a statement, saying:

“Arsenal Football Club has unveiled a package of measures designed to help supporters with the cost of attending matches.

“The club has announced that it is freezing all general admission season ticket and match ticket prices for the next two seasons, meaning that general admission prices will be flat for all games at Emirates Stadium until at least 2018/2019.

“The club is also providing a further £4 discount for its away supporters attending Premier League matches, in addition to the £30 cap on away tickets announced by the Premier League.

“This will ensure no Arsenal fans will pay more to support Arsenal at Premier League away games than the lowest priced £26 ticket that both visiting and home fans can pay to watch their teams at Emirates Stadium.

“It means Arsenal fans who travel to every away Premier League match next season will save up to £370 compared to the full adult ticket price.”

Arsenal chairman Ivan Gazidis said, “In terms of the financial support for away fans, we have consistently been strongly in favour of doing more to help and were originally in favour of a Premier League proposal around travel initiatives which would have been even more generous to travelling fans than the £30 cap.

“Once it became clear this would not receive enough support across the Premier League clubs, we supported and directed the funds to the £30 cap plus an additional £4 ticket discount for Arsenal’s away fans.”

So good news, and a nice bit extra from Arsenal, not usually known for their generosity when it comes to ticket prices.

Also, huge kudos to all the fans representative groups and people like the FSF who have been campaigning for this for a long time. Great work.

Arsenal 3-0 Newcastle: By the numbers

nice to see Arsenal further subsidize it by £4, so that away tickets for AFC fans will be £26, lets hope our away fans are more inclined to buy £26 tickets than our home fans, who don’t sell out the Cat C games at the Emirates.

Fair enough. They’re running a business at the end if the day.

“Capitalism” (for lack of a better word) + Football has led to :

1. Rooney earning £15.6 million/year
2. Andy Carroll costing £35 million
3. £2039 for an Arsenal season ticket
4. People showing understanding for all of this: “it’s only fair, market dictates the price and our club is a business”

In light of all of this, it really is great work on the part of FSF achieving a 30£ cap on away games.

well this decision is great news for the away fans of the big clubs, no longer can the likes of Norwich, sunderland, etc charge Arsenal fans etc, two and three times the price their fans are charged when they go to the Emirates.

I don’t even live in England but I’m happy for the fans.

Great news. Now why can’t price capping be applied to ALL Premier League tickets? With the clubs about to earn insane amounts of cash with the new TV deal, there’s no need for stupidly high ticket prices. The money only gets wasted on excessive wages for mediocre players like Walcott.

He is Well Beck Now!
Reply to  Fatgooner

For once, I agree with you.

It’s a big step in that right direction

Won’t people with the most credits away credits , just buy the tickets whether they want them or not and just sell them on Twitter at a profit.

fair point Riku.Those with high away credits will keep on buying the cheap away tickets.So .it will be harder
for others to get tickets. .
Its wrong that they are knocked out for a profit .Should fac
e value to fellow fans

Fair point indeed. But you’d hope that those fans are truly”fans” and know more than any the pain of overly priced away tickets. But then again I’m probably naive to have any faith in the common decency of human beings

Is there a person alive who believes Gazidis initially said no to the £30 limit for any reason other than greed? And when he realised, alongside the Barcelona surcharge attempt, of the reputational damage this was doing to Arsenal, he’s trying to repaint it as we wanted something better all along?

I’m alive. I believe Gazidis. He seems like a nice bloke.

Even if that were true, I would still love this news because it means that fans still have SOME leverage over corporate gladiator-profiteering.

Should be a price cap on both home and away. But nice with some goodwill atlast. But a teeth gnawingly and frustrating decision for them to make im sure. Kroenke probably throwing a tantrum cursing all us ungratefull fans and all their silly representative groups. Gazidis afraid if this means he will be getting a smaller Bonus this year when the club manages its goal of 4th place. And Wenger will probably be losing sleep wondering if this means he wont get a raise before next season even though he yet again delivers on the clubs ambition of a 4th… Read more »

Part of the original announcement on the Arsenal website that sources the extra +£4 for our away fans was a price freeze for the next two seasons on all home tickets.

It isn’t good enough, as prices are not going down, but any rise is completely off the table.

“… the lowest priced £26 ticket that both visiting and home fans can pay to watch their teams at Emirates Stadium.”

Confused as to what this means. Can anyone help me out here?

Basically, the cheapest tickets at the Emirates are £26 (Cat C lower tier).

Away fans coming to us for those games will only pay £26, so the idea is that Arsenal away fans never pay more than that, wherever they go.