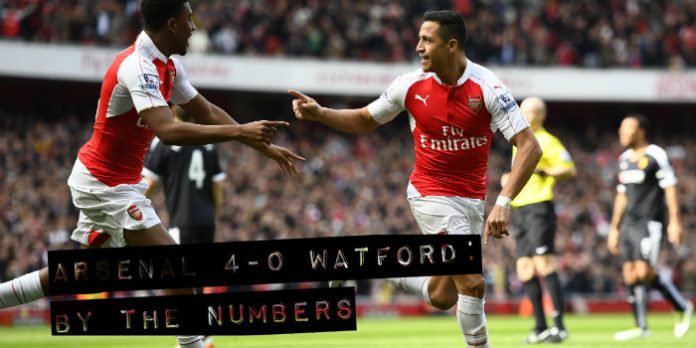 2 – Shots on goal Arsenal allowed against Watford both today and in the FA Cup match… um.. yeah, they scored both of their shots on goal in that match and neither today
1 – Watford only had one shot in prime against Arsenal today and it was blocked
2 – Watford did have two shots in prime against Arsenal in the FA Cup and scored one, the other goal was from outside the 18 yard box

*This is why Wenger loves about Gabriel and Koscielny together, they both step to take away passes in to opposition attacking players. This is a hallmark of Arsene’s defense. He likes his center backs to deny the ball to the opposition attackers through swift interceptions. They actually look a bit like what the lay person might call a tackle but they are true interceptions, nipping in just as the ball’s being played and stealing it. In fact, both players made 0 attempted tackles on the day. Wenger also likes them to complete the “tackle” high up the pitch and today both players only made 5 of the 12 total interceptions in the Arsenal final 1/3. Wenger also wants his DM to do the same and you won’t be at all surprised to learn that Coquelin had 4 interceptions on the day. Arsenal does this even despite the opposition having almost none of the ball. In fact, Arsenal made 25 total interceptions against Watford’s 326 attempted passes and Watford, who play a more tackle-oriented style, made 19 interceptions on Arsenal’s 773 passes.

Southampton 1-0 Arsenal: By The Visuals

Southampton 1-0 Arsenal: By the numbers

El neny keeps getting better and better. Ozil was just having fun out there. The thing that excites me most about iwobi is execution! Execution of thoughts, right action at the right time. He’ll only grow more. It’s noticeable we lost our fluency when he left. He has a knack of popping in and out of spaces just outside the box and executing the next best action. Just a joy to watch. Ozil missed a big chance before we made it 4-0. Just want him to set the record for assists. Monreal’s dribbling is lovely each time. I love that… Read more »

2 – The total amount of motm collected by Iwobi now in as many PL-games from start this season (i think).

Coquelin had a 100% pass completion rate on 88 passes? That’s almost as ridiculous as Elneny attempting 127.

I thought the Coq was outstanding, some of his forward passing was incisive
Best midfield partnership since cazorla got injured, maybe better than coqzorla

Many of them were one touch passes back where the ball came from with little pressure from Watford, but still great possession all around. Really liking the combination of Elneny and Coquelin and the attacking speed/agility that foursome up top brought again today. Had four, but could have had many more.

Fan of Coqs
Reply to  Mark

Coq found Alexis which lead to the second goal. That was a beautiful pass.

So we have given up 9 goals from outside the box this season. How points have we dropped from those goals?

that’s what I love about this team, but causes me so much frustration. So much quality but not available at the same time. If Wilshere, Ramsey, Cazorla, Arteta and Rosicky, were available what would be the starting 11 after today’s game? Elneny was fantastic and Coquelin was back to his best. I guess that’s a problem that doesn’t need solving as of yet. Two solid wins in row, let’s keep it up….

You would recommend starting Arteta, Rosicky, and Ramsey over the current 11? As much as I have enjoyed watching Rozicky play over the years. Unfortunately, Arteta and Rosicky are way past their prime. Arteta was a real liability when he played this year his lack of pace and tracking back cost us at least one game. Ramsey is not disciplined enough to play Holding Mid and doesn’t play well on the outside. Elneny plays balls quickly and effectively. Ramsey tends to hold the ball longer and plays balls less effectively. Ramsey should be used to back up Ozil, not sure… Read more »

the issue has been depth. Being able to rotate the squad and bringing on a fresh player like ramsey in games when we needed a goal, or cazorla/arteta when we’ve needed to control the game would without doubt one us more points

I fucking love Elneny. Fucking love him.
Let’s give our scouting team some credit for that find.

Is the takeaway that Ospina — despite our feelings about his milkiness — is actually a really, really good keeper, and perhaps even more effective than Cech?

I don’t know, but I struggle to think of a team that has a better 1st and 2nd choice keeper in the league.

And most importantly, the name still works with the goal-kick chant.

The stats are incomplete – you cannot compare Cech and Opsina on those numbers as they do not take into account games played, opposition and team form.

Ospina is a very good keeper. International level. Cech is legendary level because of his consistency.

Can anyone tell me how far Elneny ran today? With all those passes, tackles and interceptions, it must be a ridiculous distance. He’s like an athletic busquets! And I love the fact that so much of it is one-touch. Recycles the ball so fast

Coq was terrific, I definitely remember at least one mis-placed pass?

Save by ospina. Sweet. And more sweet.

Nobody even remembers how coldly Ozil was getting into some Watford heads. That’s revenge idiots. Not how many goals but how we enjoyed rubbing it into your dreamy heads