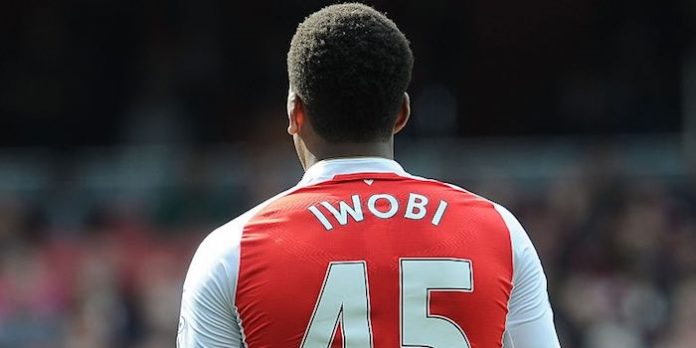 Arsene Wenger says he’s been pleasantly surprised by the impact of Alex Iwobi this season, despite being well aware of his potential as a player.

The Frenchman refused to send him out on loan this season and integrated him into the first team squad. Injuries and poor form have seen him given a real chance in recent weeks, starting at the Camp Nou against Barcelona a massive show of faith, and in two Premier League starts, he’s scored two goals.

He got the second against Everton two weeks ago, and the second in the 4-0 win over Watford yesterday, the kind of end product that Wenger wasn’t quite expecting just yet.

“It’s surprising how quickly he’s integrated into our game,” he said.

“He’s worked with us since the start of the season and he has grown, gained confidence and when he came in he had an impact straight away. That’s benefited from the fact that he knows everybody and they trust him as well. I didn’t expect that level of efficiency or impact on the scoresheet.”

And the manager said the reaction from the Arsenal crowd when Iwobi was taken off yesterday says plenty about him as a player.

“These people have seen many good players over the years and they know straight away when a player has something special, so they acknowledge that,” he said.

Wenger’s words of praise were backed up by teammate Hector Bellerin who said, “He has shown a lot of dribbling and creativity up top. Sometimes the team needs that, it is very nice to get a breath of fresh air from a player that have come from the academy and have played in the under-21s and under-18s.

“We are very proud of him and he has done very well.”

He seems to have a level head on his shoulders too, and the potential is obvious. Let’s hope he can keep making progress and developing as a player.

I’m very happy with him. I’ve always said go out and buy players because I didn’t think much of our youth squad. Here we have a player who the manager has faith in and Iwobi has shown us what he’s capable of.

For a player so young he’s so comfortable on the ball, never hides and always wanting the ball from players like Sanchez and Ozil.

A great addition to the first team and I hope he plays in all the remaining games of the season.

Credit to Wenger for giving him the chance.

God bless Iwobi. He wil really do well. And would end up scoring more than 15 goals in the EPL next season!

“It’s exciting to see a real Arsenal lad make the breakthrough.”
And on a day when we celebrate the life and mourn the passing of a London born, Arsenal bred true here,. Life sometimes has a beautiful symmetry.

Spurs will win the title!

Rather funny how Bellerin sounds like a proud father, what with being all of a year and a few weeks older than Iwobi. Of course it mostly shows how firmly Bellerin himself has managed to establish himself, which is great to see too.

Good point! They may also know each other from the academy? Sometimes it feels like academy players really like it when others make it as well.

I love the way he blends with Alexis, (Alex and Alexis) – if your team is breaking down call the AA!

What I find most assuring bout Iwobi is his confidence. The pressure of playing for a club like the Arsenal doesn’t seem to affect him one bit, his goal yesterday was calmness personified. I believe the breakthrough of Bellerin last season and Iwobi this season will do wonders for young players in the Academy.

Alex Iwobi was exciting to watch in pre-season at the Barclays Asia Trophy in Singapore. He has had time to gel with the senior team and it’s bearing fruit now.

Hopefully his mate Chuba Akpom can join him soon in the first team after his loan spell. Fingers crossed!

One thing I have noticed about him, is that despite being a creative player and giving shining performances, his performances have never been flashy in the way that most teenage young attackers show. Instead, it seems to be that quality that most mature players possess. doing what the game requires, no more, no less; and doing it efficiently.

I think he has the flashes of brilliance. We’ll see more flair after he’s settled into the team

He’s my little brother from another mother ?lol

‘integrated’? he’s been with us before he hit double digits. he’s spent more than half his life at the club. he’s got some talent and a real opportunity.

I reckon end of season after his loan spell at Hull City, if Arsene doesn’t farm him out again.