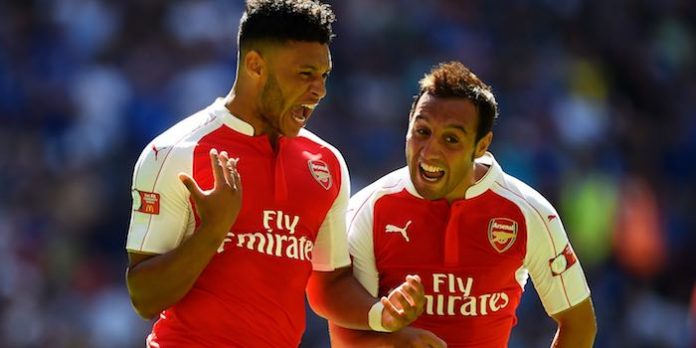 Arsene Wenger says that one of Santi Cazorla or Alex Oxlade-Chamberlain could be included in the squad to face Norwich tomorrow.

The duo are returning from injury and although the Spanish international has been out longer, he’s made further progress in his rehab and in terms of first team training.

Coincidentally, it was against Norwich that Cazorla damaged knee ligaments in November, before his comeback was delayed by an Achilles tendon problem. However, he’s been in full training for a couple of weeks now. Asked if the pair might be involved at the weekend, Wenger said, ”

“That’s not yet decided, I’ll have to decide on that later. Santi has already practised for two weeks, Alex is just in his first week, but one of them might be involved.”

He also pointed out that with everybody fit and new players having emerged, it won’t as easy to get back into the team as it might have been.

“You have some players who make their place in the team, like Iwobi, like Elneny who we bought in January,” he said. “So there’s more competition in places now.”

Wenger also seemed happy that players who have missed large parts of the season are now fit for their international commitments this summer.

“The injuries were accidental, traumatic injuries,” he said, “so it’s good they have hope to go for the European championships.”

You may, at your own leisure, insert a gag here about them getting injured on international duty and how they will be like new signings when they return etc etc.

I didn’t send that !

santi should difenately be included. we’ve missed him a lot….its no coincidance he comes back in time to help secure our annual 4th place trophy. id also like to see Rozza Involved

Just do everything to cement third position and then revamp the forward line in the summer; get in another midfielder – I have heard of Granit Xhaka – and we are good to go.
The defence is not a desperate situation: Bell, Chambers, Gabriel, Mert, Kos, Monreal, Gibbs (if he stays), can serve us for another if we get a strong DM in place of Flamini.

We’ve got squad places open or opening for more than that. My money is on Gibbs moving on, and with Arteta, Flamini,and Rozza all past regular selection we would be silly not to do more (!!!) if we actually want the squad to compete on three fronts. This is in addition to Striking needs.

We also don’t know what’s happening with Debuchy and the Corporal yet. To me Chambers is now a CB, and it should be him and Mert rotating and Kos and Gabby rotating next season.

Yeah lets just decide on this. Chambolini is a CB for me too, maybe a DM some day, maybe.
Debuchy can piss off for good, in my opinion.
Jenks for backup RB.

I was trying to say Annus Horribilis, obviously…
I can’t wait for the season to be over and I have NEVER felt like in the 50 years I’ve been going to watch The Arsenal.

We should move Mert on and buy a CB, it’s been his worst season by far and he wont get better now at his age. People will say we need his experience but why is that exactly, it’s not like his character has helped us this season. Gabriel has had plenty of dodgy moments but he reminds me of Kos when he first arrived, I think he’s a decent back-up and he’ll get better too.

That reply was for the comment above by Man Manny

I would like to see Santi back but the OX can just chill. I will probably get stick for this but the players who are just coming back aren’t ready to help us and don’t deserve to go to the Euro’s. They should try and make an impact from the bench (at best) and get ready for next season. Let the Spuds and Leicester player get injured for England at the Euro’s.

I hope Theo goes to the Euros and does well so that Swansea/Southampton or someone splashes the cash on him. Jack also should get some games in to see if he can handle it.

I hope AW keeps hold of the ox. I still think he’s gonna be a very good player. Certainly better than theo

agreed, I think he has more potential. Theo is only going to start getting slower as he approaches 30, essentially losing his greatest asset. That 50-50 challenge that he jumped over….I really hope someone on the team had a word with him about that one.

I dunno, the lack of a brain is also an asset in a weird way. Theo is really good when he doesn’t take time to think. It’s the moment he has a moment to think about what to do that he ends up falling over his own feet and making a beeline for the only defender between him and the goal and running straight into him.

Theo is the perfect goal poacher Michael Owen style which is why I don’t like him on the wing. We don’t need / want him to get too involved in the game, just get past his man and one touch finish. I genuinely wouldn’t want any other player in our current squad 1 on 1 vs the keeper with a one touch shot to finish. Two touches though and you have a different story… The issue is the way we play and other teams defend against us, we don’t really create those kind of chances as other sides sit deep.… Read more »

It is going to be interesting to see Wenger’s lineup decisions going forward and also who the bench includes. Seems that have Ramsey has supplanted Coquelin in the lineup for now. I’d expect to see Welbeck up top and I don’t think Iwobi has done anything to have him lose his spot, but could see a situation where Wenger brings in Coquelin or even Wilshere and puts Ramsey out wide right.

I’d stick with Welbeck, Sanchez, Iwobi, Ozil, Elneny and Coquelin as the front six for the run in.

I doubt our players will be that much involved in the Euros if they play like this.

Even if we have all the squad fit available, I kind of have a feeling that Wenger sticks with the same 11. I used to be excited waiting for the team sheet 1 hour before the kick-off. But now, I know (maybe everyone too) who is going to start and what kind of game plan we will have.

Tactics are too over-rated. Fuck it!!

Toast with Butter and Jam

Singing “oh santi carzola” will bring some much needed joy for a 5pm kick off. We were the best team in England before Christmas with santi. Let’s not forget

Its all about partnerships. Santi/Coquelin is the best. Next to that Flamini/Ramsey did a very decent job. Especially considering many of our top players up front were not available and results with Coquelin/Ramsey, Coquelin/Elneny were similar if not worse. Its all about partnerships. People have their agendas and their pet likes/hates. But its all about relationship on the pitch. We had to juggle with a bit too many changes and that cost us. That said, I think Ox is a very dynamic player who can bring something to our forward line. We should really see BOTH Campbell (who is looking… Read more »