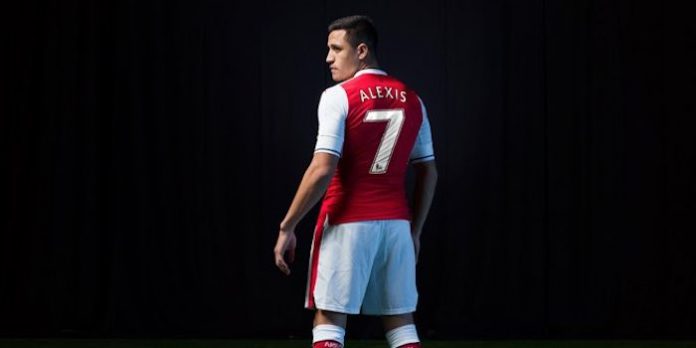 Last week, in the wake of Granit Xhaka leaks, we ran a story about rumoured shirt number changes for next season. You can read that here.

One of the key changes was that of Alexis Sanchez from 17 to 7, and this morning Arsenal have confirmed that as they launch the new home kit. The Chilean will sport the famous number next season, worn previously by such greats as Robert Pires, Tomas Rosicky, and Nelson Vivas.

It also pretty much puts paid to any speculation regarding his departure this summer. As the club negotiate a new deal, there had been talk of unhappiness and Juventus, but this would certainly mean there’s no chance of him departing.

“I think that Alexis is recovering his happiness,” he said. “He looks like a happy guy at Arsenal. He is the best Arsenal player and one of the best forwards in the Premier League.

“That means that he is working really well.”

So, we’ll wait and see if those other number changes come to pass, with Xhaka taking Coquelin’s 34 and the Frenchman moving to 8.

This is so fucking sexy. Massive man crush going on right now.

Wait till he takes the shirt off.

Wait until he lifts those shorts for those free kicks!

There have been so many leaks about Xhaka, it is like watching a gripping suspense movie knowing the climax already!

A relatively comforting news, it would’ve made me really sad to see him depart this summer.

That was trolling, dood! 😀

Just in time for his first premier league champions medal

Just in time for his first premier league champions medal.

I love the 7 so much

You were so close

Brady … the best number 7 ever IMHO.

I think Wilshere should take no.8 and give no.10 to Ozil

number 8 feels wrong for Coq. Not quite as bad as a centre-back (or Diaby) wearing 2 but it will leave me uneasy.

I bet when the common shirt retailer heard the news, he came like Alexander the Great himself.
“Fookit lads, weev got a noo nomba 7 jersay to push naoo! YYYYeeeeaaararrrrhhhhh!”

In the words of Shakin’ Stevens, lovely stuff.

£71 starting price though? I thought it was funny when Ch*lsea announced their prices but now it doesn’t feel so good with the proverbial Mercurial Vapor being on the other foot 🙁

Cost us the league in 99

Ah Nelson Vivas, perhaps the greatest of the number 7’s we have had. If all you needed in a footballer was aggression and enthusiasm (and a bit more aggression) then Vivas was your man. His memorable moments were scoring the winner against Derby, possibly in the FA Cup and getting sent off against Utd, also possibly in the FA Cup. But it was his general aggro-ness that endeared him to me. With guys like Vivas, Grimandi, Luzhny in the side, we were limited technically but at least we gave people a proper kicking. Sometimes I think we need a bit… Read more »

And you have two defenders going up the field to tackle Gallas all day long.

Ox in the Box
Reply to  AP

You got me laughing out loud in the library, nice one xD

What’s the problem with Merte wearing 4?

Centre backs should be 5 or 6. Number 4 is for the central midfielders.

Sorry only just saw this. Are you sure about that? Surely the central defenders are 4 and 5? In Germany 6 and 8 are midfielders, in fact they’re used to describe certain types of midfielder. (7 and 11 then being the wingers I guess).

Liam Brady, for those who remember when we never got close to winning the league

Welbz Or Nothing
Reply to  Glass half full

You mean the last 12 years?

Fake Empire
Reply to  Welbz Or Nothing

League table doesn’t like but stats can. Is the league table a start?!

Although we finished 2nd this season, we were closer to winning the title in 2008, when we finished 3rd, weren’t we?

This looks like a championship winning kit.. However they look. Exciting times, COYG!

What’s with the line down the middle

I seem to have memories of something similar with Henry and Fabregas as well before they left for Barcelona.

” He is the best Arsenal player”

Fortunately he is not or we wouldn’t have finished second…

If Alexis had followed Ivan Zamorano’s example he could have had 1+6 instead.

Who!, viva what, Liam Brady is prob arsenals best midfielder and the greatest No 7 at our club, give the man some due here! Arsenal Always – Always Arsenal

I remember Vieira featuring prominently in the pictures for the new home shirt in the last season at Highbury. He left that summer.

Don’t know why the thumbs down. You’re not wrong. I think ths difference is a change in squad number indicates a players desire to take the number (meaning they want to stay and play at that club with that number on their back) but players featuring in photocalls for new kits and the like is usually just part of their contractual obligations.

I don’t think the thumbs down reflect the veracity of the comment, more like the sad/worrysome feelings it evokes.

Didn’t change his shirt number though did he? Also Arsenal were a lot more restricted financially at the time. We’ve no reason to let Alexis go so I don’t see why we would.

Yeah, I think the number change is a good indicator he’s staying. You risk the wrath of a lot of fans if they buy the Alexis #7 and then he leaves (less wrath if you just bought a new #17, because he will have had that number anyway).

What a change in mood these past couple of weeks have been! The football we played in the second half of the season left me feeling so flat and disillusioned with the way the team was heading. The only thing to keep me enthusiastic about next season was the hope that we were going to keep Ozil past the Summer transfer window. I genuinely feared he’d want to seek a move elsewhere (and I wouldn’t have blamed him at that point). Well it looks as though neither he nor Alexis are going anywhere, Tottenham gave us the laugh of the… Read more »

Magical for Alexis, and really fitting that Rosicky’s shirt passes to such a genius of a player.

In contrast it feels like we’ve retired the 9 and 10 shirts for all the misfortune they’ve brought. I still dream that Jack has a monster 35-appearance campaign in him, and a striker comes along with the balls and the talent to succeed in the cursed No.9.

Been longing for Alexis to wear the number 7 for ages, can’t think of anyone more worthy. The new kit is Puma’s best so far in my opinion too.

Ramsey for the number 8?

Ox in the Box
Reply to  Stewart Robson's therapist

Ramsey and Coquelin maybe. Perhaps Coquelin is waiting for No.4 when Per is gone?

Third Plebeian
Reply to  Ox in the Box

Both wearing the 8? Good idea. The opposition and ref would be totally confused.

He could have ironed his shorts!

This new kit looks great from the back, it’d be my favourite for a long, long time if it weren’t for the damn stripe.

Showing some Ambition by going out early and buying more players close to the champion level of Özil and Alexis is probably a good way to pursuade them to stay at Arsenal.

Waiting till the last week or last day even of the transfer window like we usually do in hope of a bargain popping up somewhere that nobody else wants would only have served to push them out of the club.

Heard Ramsey rather than Coq will take the number 8. Coq is taking 16. Xhaka 34.

Ratchet: Up Your Arsenal fan

Xhakaleaks-where the secret documents of kits are laid bare.

Besides all the rumors about AS7 leaving us, I knew the guy wants to stay at Arsenal.
He’s pretty much loved by the fans and he loves the premier league. He seems more comfortable now. I can’t wait to see him onhis third year and breaking all records for Arsenal.

Yeah that Sanchez kid is good, but he’s no Nelson vivas

How the hell can you fotget rocky,brady and geordie armstrong great no 7’s and all arsenal legends

Number 7 the perfect shirt for scoring significant goals against the Spuds. Wish you well to wear it.