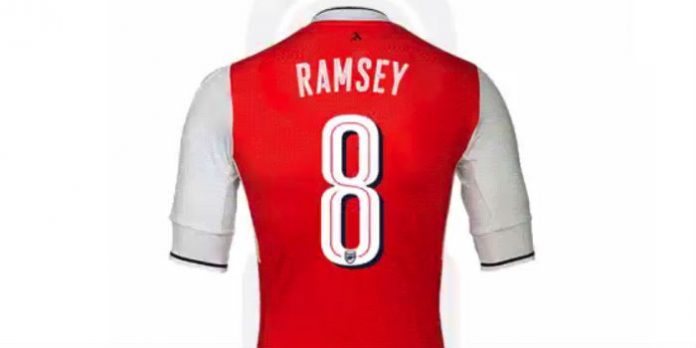 Arsenal have announced that Aaron Ramsey will wear the number 8 jersey from now on.

The Welshman has sported 16 for years now, but given the chance to take 50% off he said, “Yes, that seems perfectly acceptable to me.

“It’s just a number after all. I do like numbers ever so much though. Where would we be without them? We’d never know how much anything cost, or what time it was. Can you imagine the mayhem?

“I’m glad we have numbers. They’re right up there with letters as my favourite things because we can use them to make other stuff.

It had been rumoured that Francis Coquelin would move to 8 after Granit Xhaka was given the 34 he so desires, but as yet we don’t know what the new signing will be wearing next season.

Or the Coq, but no doubt we’ll have a series of shirt number stories over the course of the summer to excite us all.

How do you do the poo emoji? I like it ever so much.

Doing that got me banned from my local.

Now get the 2 and 3 on Hector and Nacho, like, yesterday.

Now get the 2 and 3 on Hector and Nacho right quick.

That’s all well and good, but what about getting the 2 and 3 on Hector and Nacho?

hang on a minute, isn’t #3 Gibbs’s number? Are you planning on throwing him on the scrapheap, mpls?

If Gibbo’s committed to the club and fighting for the starts, he should certainly keep it. It’s massively to his credit he’s been a true professional about it. But it’s been very quiet on that front and he hasn’t gotten the playing time his quality deserves so one does wonder.

And a 1 on Cech please, pronto.

I swear I only hit the button once!

Just once each! I swear!

up
Reply to  mpls

While they’re all at it, can we get the 2 and 3 on hector and nacho?

Jokes aside, I’m guessing Coq gets 16 and Xhaka gets his beloved 34.

I saw Coq wearing a jumper that had 27 on it in one of the Xhaka videos.

Cue the ‘because he’s half the player he used to be’ jokes.

That joke is all over the Welsh Whatsapp group already. Banter!

Coq is wearing #27 next season. At the end of one of the Xhaka photoshoot videos on Arsenal’s official youtube, Coquelin is seen wearing his training top with #27 on it.

Well I saw many subscribe videos like coq one and many different players were wearing training tops with wrong numbers not theirs.

I wouldn’t touch any sporting equipment left behind by gervinho

If Coq’s getting 27 what about Serge? Also Iwobi will probably get a better number than 45. As of now 1, 2, 9, 16, 17, 20 are what you could call ‘key’ numbers that are available. People seem to think Cech will get #1 but he banged on about how much he loves the number 33 last year it’s hard to tell. Whatever happens we’ll have a new look next season, will we have a new attitude? We’ll see!

Wasn’t aware Sanchez had changed his number and feared the worst from that comment. Glad everything is ok again. I need a moment to calm down…

Aah what a shame. That address will just seem silly now…

If you want me dead, you’re gonna have to do it yourself. I can’t be bothered with something so insignificant.

no you get to live another day, the Email boy that I want dead. Im a cold hearted twat they say :))

In the immortal words of Nelson, hah hah

Bloggs, stop picking on Ramsey. He treats everyone with ever so much respect and only deserves ever so much in return!

The boring Aarson Ramsey quotes in these articles remind me of a monotonous Rambling Pete… where IS that guy by the way?

You shouldn’t have a gap in your passwords :-))

Bugger got there before me. Bugger.

Crap, that means he’s staying with us then 🙁

I got so many thumb downs when I said he’ll wear 8 coming season :))

That’s bad mate…hopefully it wasn’t your insight that was in question? ;-))

no it is your nose in inappropriate places. get a life :))

Santi deserves 8 more than Ramsey, no? No?

I see what you did there.

Coq was wearing 27 in the welcome to Arsenal video for our newest signing.

I think Ive even seen Arsene wear something with 27 on it.
It must all be a tribute to Gervinho.

Should have retired #27 when eboue left!

The first team wearing numbers 1 through 11 would be nice, if only for my OCD.

Still waiting for that #9 spot to fill up

I long dreamed for Ramsey to wear this number…ironically, it’s come off the back of the season he probably least deserves to wear it. But maybe Arsene sees him as the new Freddie. Freddie wasn’t a natural wide player either but played that role for us to fit our system. Maybe he sees Ramsey being pushed out wide to accommodate Wilshere/Cazorla alongside Xhaka.

But one thing’s for sure. He’ll look ridiculously handsome wearing it.

Well…he needs to die his hair red for a start..

I hope with number 8 from 16 he can cut the Hollywood crap by half. That will make the team more effective.

I quite like this number shuffle. I think it’s good for the team. It should make the guys step up a little bit!

Even Henry is bigging up Mourinho. I mean, it’s fine he has logically assessed that Cunt joining ManU but its equally logical to call that big ego a massive Cunt?

Well, that would ruin the media love-in, wouldn’t it? Fear not, it’ll all end in tears eventually. It always does with that sour prick.

I’m sick of these pundits licking each other’s arses just to stay safe in their jobs. I’d like to watch some late night poker with Arsene, Rafa, Pep, Claudio and a few big bottles of red, with them all telling each other their why Jose is a Cunt anecdotes. Maybe you could add Hector Cúper as the silent guy just for the smoke factor.

Coq is wearing 27 I believe?
Remember welcome Xhaka video, Coq comes in the end with for more subscribe to blah blah… with number 27 on his training kit.