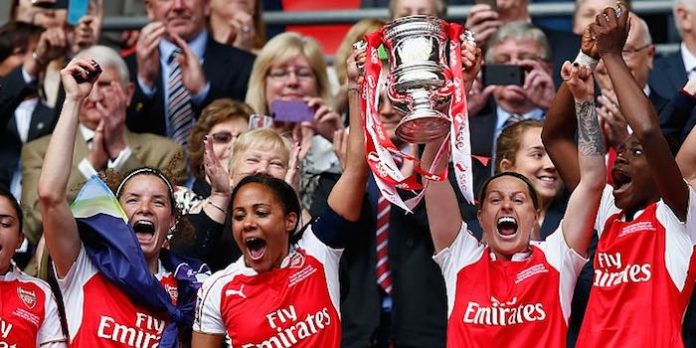 The goal came from Danielle Carter in the first half, and what a strike it was too:

Danielle Carter gives @ArsenalLadies the lead in the Women's FA Cup final against Chelsea with a cracking strike pic.twitter.com/fjlUWtNznr

By all accounts, the Gunners were far superior on the day and very much deserving of the victory.

Tim Stillman will have some post-match reaction from Wembley in a while, in the meantime congratulations to them, winning silverware at Wembley is great fun.

It was so good to watch the Arse on TV and see them pick up the cup. Coyg

Congrats to the Ladies. We dominated Chelsea, and that Dani Carter goal was top, top qualitee. Wembley still red.

It was top-class tactics that did it. We were massive underdogs – unsurprisingly given the money Chelsea have been putting into their women’s team, which includes (oh what a surprise) nicking our players – and we’ve not been doing very well this season, apparently mainly because the manager has been experimenting a lot with tactics and formations. Looks like all the experimenting has been very useful because he got it absolutely spot on when it counted, with Chelsea’s formidable forwards barely getting a sight of the goal for most of the game. Brilliant to see brains beating money, with it… Read more »

Can we sign them up for the males first team?

What a goal, reminds.me.of freddie !

That is high praise indeed! Deservedly so too.

A cracker…I was there we were all over them, like a rash. We deserved to win. Fabulous game from the lady Gunners…COYG….WAY TO GO…

No they don’t. Stop trying to sound all moral and shit. It’s embarrassing.

Super goal….sign her up Wenger.

One of the better goals I’ve seen this year, from either gender. Nicely done arsenal ladies.

Congratulations to Dani “Welbz” Carter and the team. What a classic match-winning goal!

Can she play for the mens team please?

Congrats!!!! to Arsenal women team.
They are really consistent.

Top work! Well done to them. And that goal was fukkin’ excellent.

(I don’t suppose the men’s team could do some training sessions with the ladies coach on how the play without the ball? The workrate and constant closing down by the Arsenal Ladies was outstanding – Chelsea weren’t poor, Arsenal made them poor.)

Well, sometimes the best man for the job is actually a woman.

So have we officially won the FA Cup 3 years in a row? #WagnerIn

Fuck yeah any time we get one over Chelsea priceless. Well done gals. And yeah fuck Chelsea

Fantastic – the kind of high energy, pressing game we’d like to see from the chaps…if that could be arranged…please ?

Apart from the cracking goal, the other impressive thing was the intensity they played with, chasing down when not on possession, giving no time on the ball and working hard for the whole 90 minutes.

Perhaps the men could learn a lesson from this?

I watched this goal many many times and really enjoyed it.