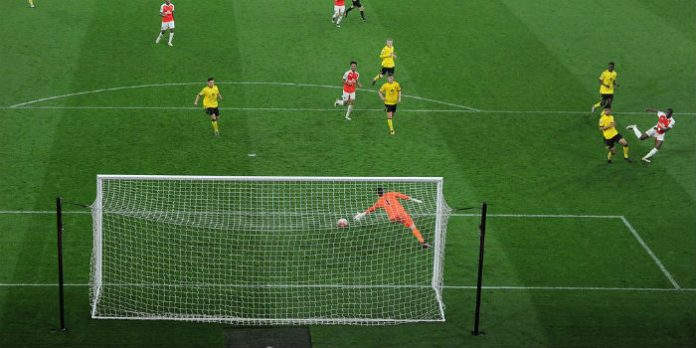 Arsenal will play in the top division of the under-21 Premier League next season after securing promotion with a 3-1 win against Aston Villa in their play-off final at the Emirates.

Steve Gatting’s side went behind to Rushian Marcus Amari Hepburn-Murphy’s (actual name!) early but levelled things up before half time thanks to Chris Willock’s strike on 36 minutes

The eye-catching Willock, who also scored a decisive brace in the semi-final, then turned provider delivering a fine dinked cross for Stephy Mavididi to head home just past the hour.

The duo combined again with four minutes remaining as Mavididi clinically slotted home Willock’s pass with his left foot to seal the win.

Santi Cazorla and Francis Coquelin started in the centre of the park, the former missing a couple of great chances in the second half, and further first team experience was added by Joel Campbell on the wing and Calum Chambers in defence.

Arsenal had the chance to secure automatic promotion a couple of weeks ago but lost their last two fixtures when a single win would have secured the title. Thankfully, they’ve done the job at the second time of asking. Well done lads.

With Santi on the pitch for 70-odd minutes, it was almost like cheating…almost.

We’d better fucking win with that lineup versus a bunch of kids who couldn’t get into the shittiest team in the PL this season.

If I’m reading the article right, we did win..?

Any links for the goals?

either way it’s great for the development of our time. Dare I say it’s like a trophy?

Huh? I don’t get how we can have THAT many 1st teamers playing??? Fair enough Santi coming back from injury but the other three? Good news anyway.

Chambers is still an U21 player + the 3 others.

We tried to sneak Gnabry in too but had to withdraw him at the last minute. Worked out fine as it turned out since it was Willock who took his place.

Doh! Course he is. I’d forgotten what it’s like to have an u21 player anywhere near the 1st team 🙂

I mean u21 defender

I was drinking beer ok? I meant young central defender

Nice to see us getting a bit savvy, it’s not cheating it’s playing to the rules and we’ve been naive for far too long. We’ve got some very good youngsters in that team, if they continue to progress we’ve got some real stars coming through.

How big is this fella’s shirt to fit all that on?

I love the sound of this hot young prospect Cazorla. Anyone know much about him?

I have it from a reliable source that lobsters find him delicious.

Chris Willock seems nice. I want to give him cake.

That’s what they said about Arshavin.

Too soon, man. Too soon!

If you eat cake you should exercise.

Very nice, but something in me feels almost sorry for Joel Campbell. I’m sure he’s happy to contribute but Lordy what has he done to Wenger to merit such an apparent demotion?

It’s not been mentioned here, but Campbell was… not very good, especially compared to Santi, Coq, and Willock. He has terrific vision, but his touch was often quite poor. Honestly, if this is how he performs in training, I can almost understand why Wenger’s not been playing him… and I would fully agree with Wenger, were Walcott not the alternative. Willock, on the other hand, made a very strong case to be included in the first team plans for next season (as he has been doing for the last 2-3 months). In fact, I’d absolutely love to see him get… Read more »