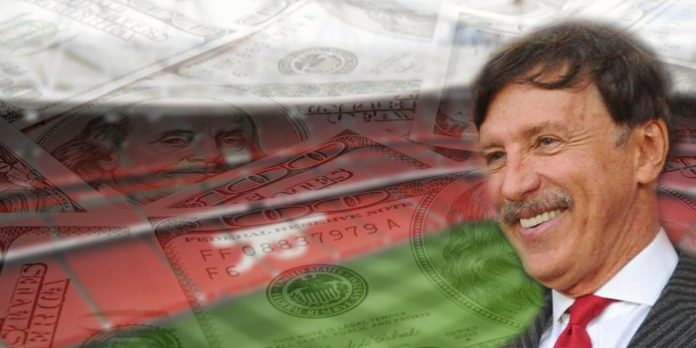 Arsenal’s current value has broken the two billion dollar barrier for the first time, with the club ranked the 5th most valuable in the world, according to American publication Forbes.

They’ve released their annual report on the valuation of football’s biggest clubs, and the only teams the Gunners sit behind are the traditional European giants Real Madrid, Barcelona, Manchester United, and Bayern Munich.

Those 5 are the only clubs to break the $2bn mark, with Man City, Chelsea, Liverpool, Juventus and Sp*rs making up the rest of the top 10.

The club’s inability to progress beyond the Round of 16 in the Champions League means they’re not in the top 10 earners from European football’s richest tournament.

However, the might of the Premier League’s TV revenue is apparent in the list of the top 20 earners from TV. Only Real Madrid and Barcelona, allowed to negotiate their own deals separate from other clubs in La Liga, beat out the English teams. 17 of top 20 are English clubs, with Juventus sneaking in at the bottom.

Such has been in the increase in value that Stan Kroenke’s investment in Arsenal could net him a profit of $1bn should he decide to sell – an unlikely prospect at this moment in time.

With Arsenal expected to have a cash balance of up to £250m when the end of year accounts are released later this year, and the team underperforming in terms of expectations, there will be significant pressure on those in charge to use these financial resources to the fullest extent to help make the team competitive next season.

When are we having the open bus parade?

Kroenke can throw out 1 dollar bills to everyone as they drive through Islington.

‘…they see me rollin, they hating’

That’s not quite how valuation and dividends work guys but yeah. He could still do all those things regardless of Arsenal’s value anyway.

…or having a money fight with his own Smithers:
https://m.popkey.co/c19ecd/mzDda.gif

Knowing Kroenke, the next bus parade we do will probably be the first in history to introduce a ticket system and charge each fan £20 for the privilege of being part of it.

And then he’ll charge the club couple of millions for this valuable advice.

Do we have a stake in Flamini Enterprises or something?

And the TV money is going up next season…

Who needs trophies when we can all be so proud of the £s coming in to our club? Arsenal must have found a lot of suckers to pay up to get that much income.

Or alternatively, think where we would be if we had trophies too.

It depends on how much growth is factored into the valuation – obviously this will be good given the TV money – plus the cost of equity of Arsenal, which is likely to be low given interest rates and the stability of the club.

Have a look at Man U’s P/E ratio on Nasdaq to see what you think of the valuation given that.

Love how Bayern have some of the cheapest tickets, all kick offs are live on TV, have a big ground (75k), and sell out every game. But aren’t even in the top 20 in TV money revenue. That’s how to run a business!

A Gorilla
Reply to  Rob

No it isn’t. It’s how you run a football club. When you run a business you just want profit above all

Thats gotta be worthy of a half naked changing room selfie session!

Hutch
Reply to  A Gorilla

Took the words out of my mouth, Mr G.

3points in the toilet

Looking forward to seeing this money sitting in the bank, safely 😀

I want some taquitos

Can you put this in our trophy cabinet?

Pretty much every PL team thinks 4th is OK as a minimum.
The 2 Manc clubs want 4th desperately.
But you’re implying it’s the target of the club rather than the bare minimum the club want, but you’re wrong. Although they have underachieved once again, 4th is the bare minimum.

Time for KSE to make that consultancy services withdrawal …

FINALLY! The timer on http://www.sincearsenallasthadgoodfinancialnews.co.uk/

It’s been at least 3 months since the last time.

Was meant to say

The timer on http://www.sincearsenallasthadgoodfinancialnews.co.uk/ can be reset!

I am so happy for Stan

The good thing about reports such as this, is that the club have no excuses anymore. We can’t compete with the oligarchs = Leicester won the league We can’t compete with the mega rich teams = Arsenal are one of them No strikers are available = You have the money to ostensibly sign anyone bar Messi and Ronaldo Looking at those numbers, you have to be impressed with the business side of the club, but, and this is the big but, the football side is now the side that is failing. The only people responsible for that are the manager,… Read more »

You’re quite wrong about the business side.

We are awful at bringing in commercial revenue compared to the top clubs. That’s where the likes of Bayern and ManU beat the crap out of us. That’s why they can spend on players.

We, on the other hand, are high up the table because we have huge gate receipts, consistently get into the CL, are highly attractive to TV schedulers, and are in such a cash-rich league. If we had the same business acumen as Bayern we’d be able to compete directly with RM and Barca.

good for Stan. he earned it.

WHAT? We didn’t even finish in the top four???? Wenger Out!

While it’s no trophy. The club have done well to reach this position. What are the odds of signing Hazard? I think he’d want a move abroad, but one can dream

We’re the plucky $2B underdogs, going up against the evils of City, Chelsea and Leicester with their financial doping.

Woohoo! We’re minted! Looking forward to my heated seat and ermine blanket for those cold Champions League* nights in December.

Are we financially secure now? Can we finally go bananas in the transfer market?

Too Drunk To Be Offside
Reply to  Danny

Financially secure NOW … Arsenal have been in the top group of most rich lists for a 5-6 yrs now.

All this no money is just hogwash to fool fans and ensure there are no questions asked when the money goes not into securing new quality signing which r much required, but in the pockets of Wenger and Stan.

Kroenke is building for the extreme future

Despite the negative undercurrent in the English media reports of the club even when we were doing well, ours is one of the most televised matches.

While its impossible now, maybe like Barca and Real Madrid, we should negotiate our separate deal with the TV companies!

Having said that, if our transfer market dealing are anything to go by we are probably better off in the combined TV deal!

We’ll have to wait for the DVD.

But remember, We should be proud of how well run the club is. Who was it that said that, Wenger or Gazidis? Now Watch their salaries and bonuses go through the roof again while we invest just what is nessecary to stay in the top 4 for the CL Money. We should make a chant for this. To the tune of Mesut Özil Chant. Loaded with Cash, Drowning in cash, I just dont think you understand. We could have bought Messi, And won the Champions League, We are wealthy as FUCK! Or We’ve got Wenger, Arsene Wenger, I just dont… Read more »

Those shareholders who sold up to the two major shareholders must be thinking hmmm maybe I should have sat on them a bit longer.

Juventus below Aston Vila in the TV money league.

Actually guys this does make sense from a financial perspective. I’ll explain, we maybe don’t deserve to be in this high position if we base revenue and valuation on the on pitch performance but in terms of actual valuation based on financial statements we do. Our excessive cash flow on hand is what is driving up our valuation. In a business environment such as that of football (bad season, failed transfers, sponsorship deals going south) cash crunches and solvency issues can seriously hamper a football club. The added security the club has provided is a dream for shareholders. This firghtens… Read more »

What does it matter … if all the money is going in the pockets of Stan, Wenger and co. and none is being invested on signing new players to improve the side so Arsenal can aim for more than just participating in the CL. Last season too Arsenal were high on the rich list, but made just one signing and finished the season trophyless,. Wenger will again make lame excuses – – No money – No player earth cud possibly improve this squad, as they aren’t TOP TOP TOP TOP TOP TOP TOP TOP TOP TOP …. you have all… Read more »

Also before ppl jump on ATL won league, I am obviously talking about a few seasons back.

Wenger has not won the league in … well we all know … enjoy counting all that money and then swimming in it like Scrooge Macduck.

In truth arsenal fans just like the team lack the bottle to do anything about their dilemma …when it came to the crunch to protest what happened….they were all singing one Arsaene Wenger !… Give Wenger the best team ie an invincible squad like he had and he will win the league…if you want a manager who will punch above the weight and and win things you can forget it… If you get rid of Arsaene you still have kroenke who in my opinion is a bigger problem than Arsaene.. The future of the club trophy wise is truly bleak….the… Read more »

I’m confused with the “Give Wenger the best team ie an invincible squad” reference. Not many in that squad that he was given… Or are you suggesting he needs Bruce Rioch to buy a few players for the squad…

Money, it’s a gas,
grab that, Stan, with both hands and make a ‘stache

I know i.ll be told this is real life not FM but the money is actually there to go crazy in the transfer market. Imagine we bought Pogba, Kante, Xhaka, what a midfield w Jack as 1st reserve! Morata and Leroy Sane for the attack and Van Dijk to replace Mert. Cud sell Walcott and Ramsey to for a total outlay of about 200M. And Ros, Flam, Arteta off the wage bill. That is a team that wud compete at the highest level

Our defence would still let in the first shot on goal though.