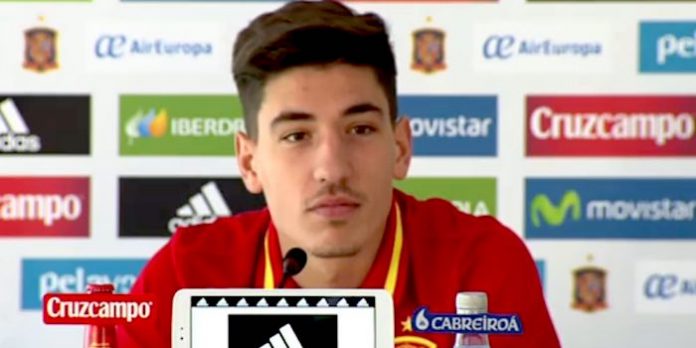 Hector Bellerin says he hopes Dani Carvajal can recover from the injury he sustained in the Champions League final on Saturday night, but that if the Real Madrid man doesn’t make the European Championships he’d be happy to take his place.

The 20 year old made his full debut for the national side yesterday, and with concerns over Carvajal’s fitness, Vicente del Bosque hinted he could stay with the squad for next month’s tournament in France.

Speaking today, Bellerin said he has summer plans but obviously they could go by the wayside for the chance to play at Euro 2016.

“Firstly, I want Carvajal to recover well and quickly,” he said. “He’s a teammate and that’s most important. As for me, I’m here until the Coach tells me otherwise.

“I’m available for whatever the Coach needs from me. I’m delighted for the experience. I had planned a holiday with my family but I’m happy to cancel it for the call of the national team.”

A decision is expected on Carvajal later today, as Spain have to submit their final 23 man squad tomorrow.

Stay away from those Barca players Hector!

I read “Bastards” instead of “Barca”

Jon Snow might want to have a word with you..

Sounds like Hector wants to play in the Euros and good on him for wanting to go. It’ll be great experience for him. Just stay clear of any injuries!

Buy out clause: one messi and £50 million cash

or just no buyout clause

So, set the buyout clause at 3 Messi’s.
Done. Sorted.

No, the reason everyone has a buyout clause these days is that the arsehat lawyer who forced the Bosman business pointed out that, under EU rules, any contract without a buyout clause could be voided in court.

Or, in other words, if the contract doesn’t have one, any duration printed on it isn’t worth shit.

A Different George
Reply to  Double98

Or Neymar. Or Suarez. Not Vermalen.

I hope Hector isn’t reading this stuff. Keep your feet on the floor mate. x

Still can’t believe we sold Vermaelen to Barcelona for £15 million. ..makes me so happy.

I will make you a tad happier than that.

We sold Song to those cunts for 15 million quid…hahaha

This is something many critics of Wenger seem to not understand. They would point to the fact that Wenger has made his fair share of poor signings. But Wenger has always spent far lower than most top tier managers thus minimising impact to our bottom line if the player should not achieve potential. For a self generating income model, this is extremely important. Where he has risked big money in recent seasons (Chiefly Ozil and Alexis) he has thus far been spot on. BOTH should now enjoy even higher value than before when they were seen as rejects from their… Read more »

Exacly my thought too when I read the post about Verm. Hah!

Look what happened to Fabregas and his defective Catalan DNA. They chucked him out unceromoniously when not needed. Arsene has done well bringing through players from academy in recent seasons. Bellerin, Coquelin, Iwobi and to some extent Campbell are good testament to the fact that the gaffer knows a bit more than many would deem to imagine. ‘Get out while you can’.;) With Wenger having a steady stream of potentials to bed into the team (Gnabry, Zelalem maybe Jeff), I would think that he now needs to break the habit of bringing in players with high potential/low cost but may… Read more »

Are you trying to say that Flamini is better than Elneny? Just ruined any point you were trying to make.

They certainly helped pay off our stadium debt all the sooner.

Arsene must have been laughing up the sleeve of his jumper the whole time.

Without those sales they’d never have been able to bring ticket prices down – oh, wait a second, they never did!

Part of me wants Carvajal to recover and play the Euros, so Hector gets his holidays and comes back refreshed in July.

Another part of me wants Hector to play the Euros, set the tournament alight, and then tell those Farcelona cunts to fuck right off with their inbred DNA.

Hope he can contribute to the Euros

This website uses cookies to improve your experience while you navigate through the website. Out of these, the cookies that are categorized as necessary are stored on your browser as they are essential for the working of basic functionalities of the website. We also use third-party cookies that help us analyze and understand how you use this website. These cookies will be stored in your browser only with your consent. You also have the option to opt-out of these cookies. But opting out of some of these cookies may affect your browsing experience.
Necessary Always Enabled
Necessary cookies are absolutely essential for the website to function properly. These cookies ensure basic functionalities and security features of the website, anonymously.
Functional
Functional cookies help to perform certain functionalities like sharing the content of the website on social media platforms, collect feedbacks, and other third-party features.
Performance
Performance cookies are used to understand and analyze the key performance indexes of the website which helps in delivering a better user experience for the visitors.
Analytics
Analytical cookies are used to understand how visitors interact with the website. These cookies help provide information on metrics the number of visitors, bounce rate, traffic source, etc.
Advertisement
Advertisement cookies are used to provide visitors with relevant ads and marketing campaigns. These cookies track visitors across websites and collect information to provide customized ads.
Others
Other uncategorized cookies are those that are being analyzed and have not been classified into a category as yet.
SAVE & ACCEPT
wpDiscuz
29
0
Would love your thoughts, please comment.x
()
x
| Reply