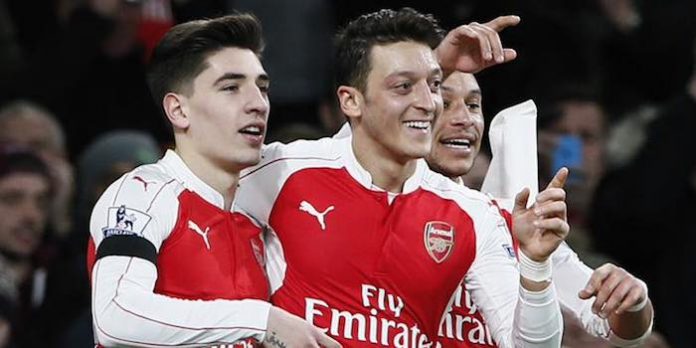 Mohamed Elneny won this season’s Arsenal goal of the Season with his strike against Barcelona at the Camp Nou. It was a very nice goal, in fairness, but we reckon there were better.

So, here are the top 5 goals of the season, including links to the goals, as chosen by:

It’s not about Ozil’s scrappy finish – an effort that barely crossed the line thanks to Neuer’s ridiculous agility – it’s all about Hector’s speed. Having been given the run around by Douglas Costa in the first half, the Spanish right-back proved his mettle after the break, capping a fine individual showing with a last-gasp assist. Stealing the ball from the Brazilian just by the centre circle, he powered towards the box, looked up and delivered a pinpoint cross for Ozil, who cushioned his shot goalwards. Did it cross the line? It took a moment for the Emirates to realise, yes! Cue pandemonium.

Another goal chosen for the majesty of the assist. Collecting a long ball from Ozil, Joel Campbell bamboozled his marker with footwork worthy of Zorba the Greek then delivered a laser-guided pass for Giroud to slide home inside the six-yard box. The Frenchman went on to bag a hat-trick as the Gunners nailed the 3-0 scoreline needed to secure safe passage to the knockout round of the Champions League.

When you can excite Martin Tyler to scream, “Flamini…oh, it’s his night!” you know you’ve put in a decent shift. The Frenchman’s volley in the League Cup may not have led to trophy glory, but his two goals and all-round performance on the night certainly won the hearts and minds of Gooners across the world. He fucking loved it as well, as evidenced by his punching of the corner flag in front of the travelling fans.

No nonsense, that’s the beauty of this goal. After opening the scoring with a deft back-heel, Sanchez’s second of the afternoon was all about power. He had a little luck burrowing past Darmian, but as the ball escapes into the box the only thing on the Chilean’s mind is belting the ball into the top corner. A superb finish to make it 3-0 and to cap an amazing opening 20 minutes.

In retrospect, it should have been the goal that set us on the way to the title. That obviously didn’t happen, but for a few brief moments after Welbeck’s late, late, late header against the league leaders, the Emirates jumped as one. No politics, no in-fighting, no anger…just pure joy. And it was all the more special because the man who scored it was making his long-awaited return from injury. You can’t beat a last-gasp winner.

He picked the ball up in midfield, drove forward, played it into Olivier Giroud who dinked a beautiful return pass over the defence. Ozil kept running, took a touch with his belly button, then finished calmly beyond the keeper. Giroud’s flicks don’t always come off, but when they do they’re glorious.

Our reluctance to shoot from outside the box has been explained away by Expected Goals stats (make of them what you will). Sometimes though, it’s good to have a go. This goal pretty much sums up Walcott, a strike of fantastic power and precision, coming from a pass that wasn’t mean for him. When he collected the ball, Ozil gave a little ‘omg get out of the way’ shuffle, but the strike past Joe Hart was brilliant. And then he went 11 games without scoring again.

Early in the season, Ozil’s cross was just behind the Frenchman but he swivelled and fired a shot back across the keeper and in the bottom corner. A cracking strike for his first goal of the season.

We were not playing particularly well on the day, but Welbeck made inroads down the left, the ball came across the box to Hector Bellerin whom might have shot but looked for Ramsey. The pass wasn’t great, but the improvisation to flick the ball behind his leg on the run, bamboozling Lloris was absolutely outstanding. Really don’t understand why people don’t talk about this goal more.

The day that we played our most scintillating football, we scored our best goal. Coquelin won the ball back, we worked it through the United defence to Ozil at the byline, and his cut back was flicked into the bottom corner by Alexis whose movement left their defence absolutely stranded. Devastating, clinical, precision football. Sadly we didn’t see anywhere near enough of it throughout the rest of the campaign.

Obviously favourite goals are subjective, so feel free to list your own top 5 in the comments.

If you need a reminder, you can check out every Arsenal goal 2015-16 right here.

Newcastle’s fifth against Spurs simply for the lols

Hi praise for Ozil indeed. Is it akin to scousers calling Fowler God?

Anyone else think Campbell’s goal vs Swansea should be in the top 5? To this day, I still don’t know how he was able to control a sliding volley from a through-ball coming across his shoulder!

Ramsey’s flick against Sp*rs, simply because it made a decent keeper like Lloris feel like Paul Robinson.

Lloris is no decent keeper, until he plays for a team other than the Spurned.

Sanchez’s goal vs City a few weeks back also comes to mind as one of those feel good goals- the way he picked up the ball in acres of space to send Hart going the wrong way… Could also just be recency bias but whatever.

arseblog
Admin
Reply to  The Only Olivier is Giroud

“Ozil’s cross was just behind the Frenchman”

how fucking dare you.

“Ozil knew that Giroud was favoring a left-footed horizontal bicycle kick and placed the ball there before that HFB even knew that he wanted it there.”

Giroud’s consolation goal against Bayern Munich (Neur) was a peach, but obviously what preceeded that was not good.

That Welbeck goal is bring forth all sorts of feels.

How we could go on to lose against Man Utd and Swansea was beyond me….

hg
Reply to  someone's something

I know the goal meant absolutely nothing, but that bicycle kick by Giroud vs Bayern was one of the best goals of the Champions League this season.

sanchez’s 25-yard strike at Leicester should also be up there with best. After comfounding N’golo kante on the left flank with the deftest of flicks , he blasted a swerving low shot past kasper for his hattrick

Joel Campbell’s sliding volley. I can’t remember who we were playing.. Sigh, he’s so good. Pls give a chance Arsene

Sanchez against spurs would be my pick.

Ramsey’s back flick goal was infinitely better or for technique Flamini’s. Or even Chambers which had he been Sturridge the media would have deemed as ‘world class’.

This is what I mean by the hordes of people brainwashed to think that Elneny is a better player than he actually is.

Not because you cant see the kid genius you label people as fools just cause they actually could see and understand the game more than you can!!

That Southampton bloke that scored a screamer past us is still shit. That doesn’t stop the goal from being amazing.

I’d agree that the Elneny goal wasn’t the best, and I think there is some bias in the decision making, based on Elneny being in his honeymoon period with the fans, but you don’t give him enough credit.

For the record, my favourite is the Flamini volley – I thought it was awesome. That doesn’t mean other people’s choices are invalid or that mine in gospel and nor does it mean the same for your opinions.

lol I honestly wonder what you’ll do with yourself the day Flamini is released by Arsenal, santori.

I mean, being the president and global ambassador of the Mathieu Flamini Fan Club must be draining work.

But I’ll settle for seeing your reaction on the article on that day.

Still, I really, truly, honestly want to find out…

Ramsey’s flick. But maybe that’s because I just have such a man-crush on Ramsey. Somewhere in there is 2013-14 Ramsey, and I want him to find it again very badly indeed. One of my favourite players at the club. That winning goal in the FA Cup final, he and Gibbs running ballistic down the pitch in celebration. Magic.

Ramsey v Tottenham was my favourite goal, but Welbeck’s winner against Leicester was my moment of the season. Our failure to build momentum off the back of that win was criminal.

Maybe not the most important, but Chambers’ outside of the boot curled into the corner with perfection like a prolific striker in form, would be on my list for sure

Flamini vs Spurs was my goal of the season.

That being said, No other goal brought as much joy and emotion to me as Welbecks against Leicester

Without a doubt for me, it was the moment of the year.

Campbell vs. Swansea or Giroud at Palace. Tough goals. Ramsey vs. Tottenham is also a good choice. Elneny had a good goal but odd choice for goal of the season.

Elneny goal better than all those listed

Giroud’s 3rd vs Villa on the final day?
Just for that through ball from Bellerin

Sanchez’s header vs. Leicester (away).

Got on the end of a ball from Ozil who played the ball like a golfer hitting a sand wedge. INCREDIBLE technique from Ozil, made to look so easy that no one really noticed at the time nor since.

But every time I watch it my jaw hits the floor.

Also thought Giroud – cryuff’ turn and finish at anfield . Was a great goal. Techinique and power . Out of less than a half chance.Another game if we had taken three pints at!!
Walcott against city made me think we can do it !!!!! same as welbeck v Leicester !
.ramsey Gluck flick v Spurs and
Flamini v Spurs!!

A lot of games look different after three pints.

I really liked Ozil’s goal v Man Utd. The pace of the attack and coolness to pass it in to the net was fantastic.

By far, my most boisterous celebration of the season came after Welbeck’s late header against Leicester. It was so meaningful at the time too. That one’s got my vote.

I think you guys are missing the point. If I remember right, the poll was open for fans to vote right ? If that was the case then he could’ve scored a sitter and he would’ve still won because his countrymen will make sure to flood the poll. In all fairness it was a nice goal tho.

The Welbeck goal overall was the moment of the year. But “should have been the goal that sent us to the title” is ignoring the fact that we were still 2 points behind after the match and we had no control over Leicester only dropping 8 points and losing none in their remaining 12 matches. Even if you win a few of the matches you should have but didn’t, Swansea, we still wouldn’t have marched to the title.