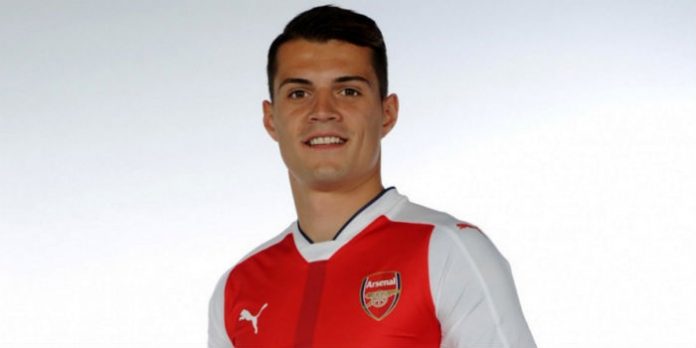 Arsenal have announced that Granit Xhaka, handed the number 16 shirt last week, has decided that he has grown tired of this rubbish number and decided to change it.

Instead he will sport 29 because, and we quote, “The number has special significance for him as it is the reverse of his year of birth – 92.”

We’re not buying it though, we reckon this is all some kind of plot based around the number 7.

Arteta: I’ll always back players who try to play my way

Does this mean someone else will take the 16 or 34 number???

Reus will be more than happy to wear 14 methinks. 😉

Reversing it gives 61, a constant reminder of http://www.haveyoueverseentottenhamwintheleague.com/

The 29 was his favourite bus growing up in Basel.

We’ll have to get him on the 29 in London.
Green Lanes is quite reminiscent of Basel, what with the fast food shops, low lifes and wall to wall vomiting. Oh and that mountain backdrop.

Such a perfect review of Green Lanes, I actually had flashbacks of growing up round there

And couldn’t Coq and him have a fight for the number 34?

If he becomes a legend it will be an epic collector’s item.

You’ll be able to swap it for the new one for free.

“We had previously announced he would be wearing No 16. Supporters who ordered shirts with his name and the original number via Arsenal Direct or in Arsenal stores will have their shirts automatically printed with the new number.”

I also came here to make an illuminati link. You know that you and I are being watched now right?

Wtf is that number changing business about ??

Hahaha honestly, what the fuck is going on with our numbers??

The lads down at the Armoury on the shirt pressing thingymabob must be doing their heads in!

really miss Flangpie in the center of midfield

Trixie Bird
Reply to  the american

For the love of God the spelling is ‘centre’ fella!!

not sure
Reply to  Trixie Bird

p
Reply to  not sure

breath noun as in “the breath he took was a long one…
breathe verb as in …and after that he could not breath”.

He shouldn’t have taken his number for Granit

I swear I thought this was one of them made up articles by arseblog but just saw his picture on Instagram. Maybe his mate Rodriguez wants the 16

Just when we were making some headway with proper squad numbers….

Well lets hope he turns out better than the last signing we had that chose the 29. Aint noone want to see a 30 million quid chamakh out there on the pitch.

My word, so the Mayans were right all along!

This is on Arsenal.com and everything. I, though, need to lie down right now; my head is spinning right now…

just dont get it either and i really wanna know

He got played by Coq.

Coq took one for the team and promised him the 34 shirt that the new boy is so precious about, until he put pen on paper. He was then rightly told to fuck off 🙂

So it’s confirmed. We are signing Messi.

Make a choice and stick with it!

Does Rachel Riley get credit for co-writing this article?

Rachel Riley gets credit for anything she wants.

Would it change your mind if I informed you that she’s a Man U fan (she even presents programmes on MUTV)?

Is it wrong that it wouldn’t change my mind?

29 is the number of electrons in a granite molecule.

Oh a similar but unrelated matter, is it true that Bendtner wanted the 52 shirt because that’s what he was earning (in thousands) a week? Or is that more Bendtner folklore? (Bendtlore)

I always imagined he wanted to be known as the B52 Bomber.
And he Bombed alright.

If he was earning 26 thousand per stride, that’s about accurate

for purposes of this article, yes. otherwise, probably not. the 34 + 92 = 166 is only reserved for special occasions and arseblog satirical arguments

Just trying to think if there are any world class no 16’s out there who might be on their way?!

GeneWildersCrazyDNA
Reply to  the farmer

Koulibaly wears 26–bad new for Emi Martinez. But Joe Hart will be apparently be available to back up Cech, Ospina, and Szczesny. Also Mignolet, but I prefer Hart.

I’d like us to put a man in goal who’s never conceded a single goal in his entire playing career as a keeper…. Jenkinson has a 100% record in goal. Why do we persist with keepers like Cech and Szczesny who’ve let goals in?

Xhaka changing numbers twice in a week Ramsey going full Kylie Jenner what’s next with his hair? What’s next?

The squad number updates have been absolutely riveting

His departure is a huge loss for us because Xhaka is not just very important as a player, but also as a person,” Sommer told sport1.de. “You can see that he is the one pulling the strings in midfield and our game would often run through him. He was the one creating our game and it’s always hard when you lose such an important personality. Now we’ve got to find a new playmaker, but I’m sure Borussia will do a good job and soon present our new Granit Xhaka.” – Yann Sommer

Bodes well for us!

The upvotiest upvote to you good sir.

I think it’s because the cover up tattoo artist said it was easier to change 34 to 29 but not 16.

Are we certain it’s a change and not an identical twin?
if it is in fact a doppelganger, does that make him like a new signing AND a new signing all at once?

He’s just trying to get you more hits, blogs

I just imagined that in the voice of Geoff Peterson, the dead gay skeleton robot.

Love what you do blogs but at times I think you just go too far to the point that there is no clear distinction between fact and fiction hence my comment. I get that the site has a tongue-in-cheek feel but seeing that I use this site as the first reference for news pertaining to Arsenal I find it frustrating when I have to rack my brain to deduce whether the tone of the article is serious or unserious. The “Mertesacker number change” article is a recent example where I genuinely felt mislead by the headline. It was click bait… Read more »

Why don’t we abolish shirt number altogether. I mean, seriously what’s the point?????

The original shirt is injured already…shoulder sprain as Granit was taking it off after the photo shoot. 3 to 4 weeks is what I heard….

But in more positive injury news, the goalpost that Podolski hit a couple of seasons ago is almost ready to make its comeback in first team action.

I bet he saw your blog post on shirt numbers and page views. Supporting the Arseblog in his first week at the club makes him an instant hero.

Is Flamini staying? He has #20 on arsenal.com, whereas Arteta and Rosicky don.t have numbers

“Whoa” – Neo from The Matrix

It’s all a Scrabble thing. He plays his name on the board in each game and picks the score for his shirt number,. Next week expect change to 70.

Anyway, if he’s so keen on using his year of birth, why not just go for 92 as a number? If they all did that AW could easily work out when to start offering 1 year contract renewals at age 30!

I just checked the Arsenal.com website and he really has changed his number to 29. I thought this whole blog post was a joke. It is just so hard to tell sometimes.

Quick buy a shirt before he has to change it to dickety-9 because the kaiser stole twenty.