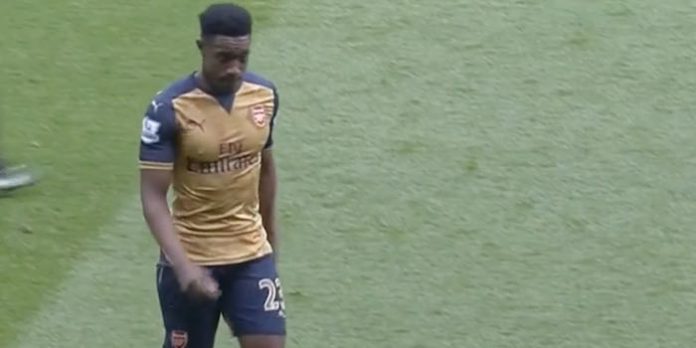 Danny Welbeck is reportedly facing a period of months out of the game after he damaged his knee against Man City on Sunday.

The striker hurt his right knee challenging Bacary Sagna, and the initial prognosis was a torn lateral meniscus.

This evening the Guardian are reporting the 25 year has suffered ‘significant’ damage to the knee and may even need surgery, which would be a massive blow for him and Arsenal.

Welbeck will miss the European Championships this summer, and if the damage is serious enough it could put him out of action for the first half of next season. Having already missed most of the last campaign, it would be another injury nightmare for the former Man Utd man.

It’s expected that the full results will be available tomorrow.

How very Arsenal for Arsenal fan-favourite Bacary Sagna to be involved in an injury to an Arsenal player. Arsenal. Injury. They go so well together. I got injured just watching Arsenal this season.

Too Drunk To Be Offside
Reply to  Third Plebeian

Wow another one of the Arsenal special perennially injured players on high wages.

I will recommend getting him off the wage books soonest possible opportunity presents itself, but ppl r just going to thumb down.

Doesn’t matter I will say it still … with his injury record he is a liability, and needs to be sold in whatever transfer window soonest arrives after he is fit again.

the blog or his knee? 😛
how is it that arsenal take a robust player and make him injury prone?
Before arsenal – 21 games missed in 4 – 5 years
In arsenal – 41 games missed in 2 years. Not counting the current injury
There is something wrong with the way we play or how opponents play against us. It is time we start diving around like Barcelona

Knee ligament injuries happen. When it happens once in roughly three years you can put it down to bad luck; when it happens three times in one year (Ox, Santi, Welbeck, plus Walcott not that long ago and Gnabry the season before last . . .) questions have to be asked. How many other clubs this season have lost even one player to serious knee injuries?

Off the top of my head, Liverpool: Gomez and Ings out all season

American here, torn meniscus happens a lot in American football and is the better of the ligaments to have arsed. Could/Should be back by mid August.

If indeed he did his meniscus, anecdotally (I’m not an orthopedist), this shouldn’t be a big deal. Minimally invasive arthroscopic surgery to repair the cartilage, then rest, then rehab. Pretty straightforward recovery without all the before/after will-he-be-the-same stuff one gets with ligament damage.

Not a huge blow, just massively annoying for Welbz since he just got back.

Can we send him to America for treatment and rehab then and get him back for the start of the season? 😀

The meniscus is not a ligament. It’s cartilage that acts as padding between the tibia and the femur.

But apart from that – yes, it’s much better to have a torn meniscus than a torn ligament. August is probablywildly optimistic, but October is very possible. If it was his MCL we’d be looking at 2017.

Blogs, it’s pretty obvious he’s done his right knee? He did his left knee against Chelsea. In this clip it’s his right knee buckling and the one he’s trying to shake out. Noticed the same mistake in the papers today.

Fingers crossed for the lad. He’s quickly become one my favourites of the current crop, never stops trying.

He has missed more games for arsenal through injury since signing in 2014 than he did in the entire rest of his career, what kind of Indian burial ground is the Emirates built on?

Maybe that’s why we bought it. It was on the cheap.

Either that or our training ground is also another burial ground.

Fuck me, he’s truly an Arsenal player now. How many games did he miss through injury for Manure in 5 years? 11 was it?

Gutted by the way. Hardworking guy with a great attitude and loves the club clearly already. Bags of promise, fingers crossed for the lad.

It’s definitely bad luck, but doesn’t look good on our side. Vermalean; no injuries before arsenal. Comes arsenal, is perma-borked. Ozil: No serious injuries before Arsenal. Comes to us, has his longest career lay off due to injury. Welbeck; Relatively injury-free bar minor injuries. Comes to arsenal and now the above. Jack: No academy injuries. Joins first team, chocolate-ankle thunder. Fabregas: C*nt. Hamstring injuries at the end of his time with us. Leaves, Barca “fix” it. Doesn’t matter now, we’ve upgraded our medical team since then. Yeah, some stuff probably are our fault, but stuff like this Welbeck issue surely… Read more »

Sturridge? Blimey, adding the Arsenal Injury Curse to an already massively injury-prone player like him would probably result in the untimely death of poor Daniel.

An Ox-sized Coq
Reply to  Stillmatic

I’ve always told my friends that players like Sturridge and Agüero are injured so much that it is shocking they don’t play for Arsenal.

Still, I’d take Aguero in a heartbeat. Even if he was injured for half of our games, he’d still probably win the Golden boot.

Alexis had the longest injury layoff of his career this season too.

It really is infuriating.

Considering how long he was injured at United compared to now, I’m convinced our fitness team/physios are just mad fucking scientists.

Pretty sure the team is led by Dr. Nick.

If it were all muscle tears and the like I’d agree, but these are now almost all contact injuries, freak ligament injuries, and breaks. Not training and conditioning issues. We’ve done a lot better on the occurrence and recovery of muscular issues this season, Alexis aside. And potential reasons for that were discussed ad nauseum already.

Poor guy, I really feel for him. Hope he makes a decent recovery. We need a striker this summer which almost guarantees we won’t be getting one!

Pretty sure the clueless posters have zero idea about injuries,how they occur or treated,
Pretty sure they are just good at blaming,moaning and groaning, all the time!

Forgive us, Philbet. We know not what we do. Please, enlighten us, O Philbet, as to the response that would be most acceptable in your sight. Further, if it by thy will, reveal to us “about injuries,” and “how they occur or treated”! We have foolishly assumed that injuries occur when the body is adversely impacted or strained. Further, in our pride, we have expressed sorrow that one of our own is injured. But clearly your ways are not our ways, O Philbet.

Let’s hope we don’t go into the season again without another striker,knowing AW we will!

poor danny. just wondering…when is it anything else other than the worst case scenario at Arsenal?

Absolutely gutted for him! Can we please just have a bit of luck with injuries next season?

On a side note…I hope this forces AW hand on the forward situation…if we go into the season with one striker I will kick off!! Seeing Bayern Munich stepping out TODAY and announcing Hummers and Sanches, makes me sad. Just proves if you move quick, business, and good business at that, can be done. Please get well soon Danny!

Do you seriously believe that Bayern phoned up TODAY and started asking about Hummels and Sanches? The Hummels deal was done around Christmas time – it just wasn’t formally anounced until now because he was still under contract to another team. Same for Sanches.

Don’t be pedantic…my point still stands. Move early and get it done!

We blame luck but should players be smarter in their tackling? I think Wenger mentioned this in the past.

Just curious, does this happen to others team too, or is it just us that are on top of the injury god’s list?

It’s generally an issue top teams face more. Whether that’s because top team players play more, or have the ball more, or are on the receiving end of horrible tackles more, or are pushing themselves past the limit more, nobody seems to really know.

Man U had a horrible time with injuries this season too, maybe even worse than we did. Man city had a lot as well.

Well see it in this way. With Welbeck facing 3-6 months out and Walcott on his way out of the club, this can probably open up for a new striker.

So does joel Campbell have to die before being selected ? ….Just wondering !!!

Danny, in June, sit down in the couch, grab a beer and watch the game like all of us. Take your phone and twit your savvy comments. This is life, buddy.

Meniscus is not ligaments, it is the cartilage like part of the knee the ” ball” sits and pivots within. It has little blood flow so heals poorly. Usually requires damaged portions removed if possible. Interior damage can be repaired and some new procedures use coagulated? Blood sewn into the repaired area to promote healing. Bad damage requires weeks to months of no weight at all until healed where ligament injuries can begin therapy immediately. This injury has nothing to do with fitness programs at all. It being an Arsenal problem is just like hitting a bone with a hatchet… Read more »

Thanks Dr, it’s so much clearer now.

And cue Wenger when welbeck comes back “like a new signing “