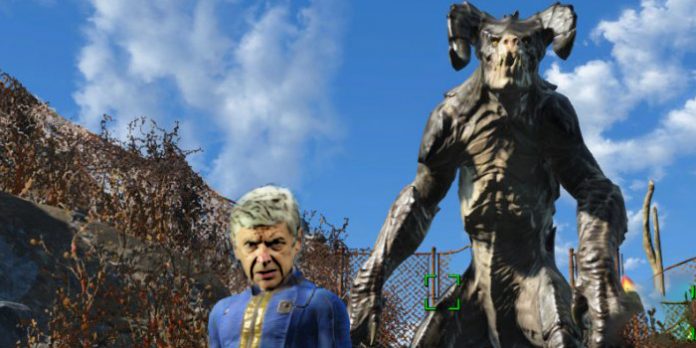 Granit Xhaka has become Arsenal’s first signing of the summer, joining on a 5 year deal for a fee that could hit upwards of £30m depending on clauses.

He’s already given his first interview to Arsenal, and laid out how he aims to bring some aggression to the Gunners midfield, but he’s also been talking about it with local press as Switzerland prepare for the European Championships.

They’ve posted some quotes on their Facebook page, and he spoke about Arsene Wenger who, obviously, will be his manager next season.

“Arsène is a legend for me,” he said. “I often had him as a manager on the PlayStation. He’s a gentleman, full stop.”

That’s a bit confusing. Can you play Football Manager games on the Playstation? Or is talking about some FIFA or PES mode I don’t ever use? Maybe even some other game, like using Arsene as his character in Fallout 4 or something. He obviously holds Wenger in some esteem though.

Some of his other quotes are below.

“I had to keep my mouth shut for the last couple of days, which usually don’t like to do.”

“I have made two great choices: one is Arsenal and the other is Switzerland. Now I have peace of mind.”

“Many people forget that I am 23 years old. I am not 30, I am not perfect and I will make mistakes.”

“I always liked Arsenal’s way of playing football. Simply nice to look at.”

“English is not a problem for me, but I still have to improve.”

“I am very happy that my wife is coming with me to London. It’s important to have your beloved ones around you, for the good times and for the bad times.”

So, there you go. Let’s hope Granit can play plenty of killer through balls with that Triangle button.

I had a Geodude on Pokemon Red called Granite. Where is he now?!

Got your back man, I was pretty neutral but gave him mine from you.

People who use “bae” to mean “sweetheart” should look up its actual meaning in the Urban Dictionary.

You’ve just said ‘actual meaning’ and ‘Urban Dictionary’ in the same sentence. Pick one, you can’t have both.

Maybe he means that he pretends to be Arsene Wenger when he plays on the Playstation. “I am such a top, top quality gentleman,” he says to himself in his best imitation of an Alsatian accent.

I assume he’s talking about playing Ultimate Team. You have to have a manager in it and Wenger is supposed to be one of the good ones. Not that I’ve noticed it make any difference to the performance of the players I use.

Yea, thats going to sting them. They would still find something to moan about even if Wenger and the Players deliver the league title.

We could go 38-0-0 with a +276 goal difference and win the quadruple defeating an entire team of Messis 12-0 in the Champions League final, and they’d still want Wenger out. There’s no arguing with people whose minds are already made up.

If you take all your comments together you guys have created the biggest straw-man argument of all time. Your bashing anyone who has critized Wenger by making up things they might do. Like not celebrate winning the league. Tell me this, how many Wenger out people did not celebrate on the last day of this season?

I support btw’s statement – the worst thing we can do as a fanbase is fall prey to juvenile tabloid-influenced argument, instead of engaging those who disagree with us respectfully. That makes you lot just as bad as the people you’re calling “fickle twats”.

Wenger’s being praised as a gent in the article above. If you support him so much you could always try and emulate his behaviour.

Mate you say that but the guy who used to write the Arsenal Truth blog did not even celebrate our FA cup wins. I can remember at the time thinking what this guy got to say now cause he was ultra negative but he didnt post, he posted as soon as we lost tho. I think it burns some of our so called support when we win.

Gotta say, it’s nice to hear a footballer actually answer questions as if they are putting their own thought into it. It’s a bit sad how rare it seems these days with your “At the end of the day, the lads done a job” and “Went out there and gave 110% for the gaffer” and bollocks like that.

Hopefully he doesn’t breathe through his mouth either. :O

Fun fact – if you google “Harry Kane mouth closed” he has his mouth open in all but four pictures.

David Attenborough had to lie perfectly still in a five foot deep pile of Tottenham for three days straight to get each of those elusive “mouth closed” pictures, I’ll have you know.

With my experience of footballers, the British players always seemed to me to be generally “less intellectual” than the foreign, particularly European players.

It’s amazing how so many European players are active in investment and other things outside of football, you wouldn’t even know about. But the British lads are all about “bantz” and “gaffer and lads” and adding “sy” at the end of every name (“had some bantz with Scholesy and Giggsy and Wiliamsy and Rooney…err, Sy whilst listening to some old school Tupac Shakursy”).

Um, so Xhaka may be a very smart man, but… What about his interview do you think marks him out as more intellectual than British players? What we’ve learned so far is that he likes Playstation, he’s always wanted to play in the Premier League, and thinks it’s nice to live with his wife instead of not with his wife. Not exactly mind-blowing stuff, is it? Thankfully, we don’t pay footballers based on their IQ. Trying to find a really insightful footballer is pretty difficult. But you know who gives surprisingly good interviews and seems to actually think? Jack Wilshere.… Read more »

Why am I being moderated? It’s because I said “Tottenham,” isn’t it? Automatically flags the system. Lesson learned. I’ll stick to “shit” from now on.

That’s probably unfair, I mean Walcott’s published four books. Perhaps not of the highest intellectual level, but still an achievement.

That’s four more books than me.

Yes, but yours are better.

Yo it’s pretty simple–on FUT you sign a manager to improve your team chemistry. My guess is that he has a Swiss team including himself, Djourou, Senderos, Inler and Shaqiri. Absolute quality.

First word being “Yo”, my brain reacted by reading the whole post in the voice of Rocky, in my head. Yeah, I hear voices..

LOL. What about Ultimate Team? You can use “Wenger” as your manager to improve team chemistry.

What an absolute cunt he is for falling in love. We should sell him asap.

i think perhaps you have read a little too much into my statement? i too had fallen in love at 23… in fact, I probably first fell in love at about 13, and then possibly again at 16. Dare I say it, again at about 18. Possibly again at about 23. In fact, come to think about it… i’ve probably fallen in love about 7 to 10 times since turning 23… and now that i’m almost 40, I seem to be falling in love every time I walk down the street. I will however, only judge this new kid on… Read more »

That plus all the red cards. He must just love to jump in with both feet! My kind of guy.

The genius of this pun has been under appreciated so far

You are a gentleman and a scholar, sir. Thanks.

In fairness, he did say: “Many people forget that I am 23 years old. I am not 30, I am not perfect and I will make mistakes.”

Seriously though, someone should have a word with him regarding that way of thinking. I say so because that’s exactly what I used to think when 23 myself: my mistakes would end when 30.

Would love to see Xhaka play as Wenger in FIFA.

No doubt he makes sure his transfer budget remains in tact and unspent.

Granit is going to be great on the counter

Granit will floor the opposition.

Quick question, though: When we’re defending set pieces, should we put Granit in the wall?

Mmm, I wouldn’t take that for Granit.

Hahahaha Scott you had me actually laughing out loud for a good minute. Thank you. Best one so far.

Rumor has it that Wenger first heard of the player when someone told him, “my gran would get into your starting eleven.”

This is actually true, I have been offering my Gran to Arsene for a while and with this signing having gone through, she is now going to continue being sub for Gravesend FC.
Unless we don’t sign a striker of course…:-)

Probably his manager in Ultimate Team?

That picture really makes me want to start a new campaign in Fallout to see if I can actually make a character look just like Arsene Wegner.

Yes, “The Lone Wengerer”. Don’t forget to stock up on “Wasteland Whisperer” so that you can always bring around your own midefield “Alpha DeathXhaka” as pictured above.

Just so you know, he’s also a Russian missile:

Plug in coordinates for Diego Costa…

Happy we signed him. Now let’s go get a cb and a striker/wide forward. Can’t wait for preseason to assess our youth players.

Not a mad rush on cb… We have chambers and gabriel for now, soon maybe but striker is more of a priority

“Look out, Wenger, there’s a deathclaw behind you!”
“Look, we’re not worried about deathclaws. We’ll just focus on our own game and make sure the handbrake is off.”

Press x to not die!
Use the action button to finish above apuds.

I like the fact that he thinks he will be perfect when he is 30.

Xhaka song has to be: