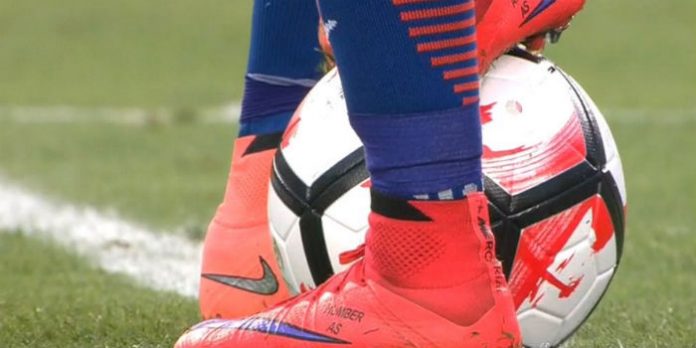 We don’t normally do these kind of posts, but we mentioned earlier that Alexis Sanchez had to come off in last night’s Copa America final having taken a kicking in the game and going over on his ankle.

Well, the Arsenal man has posted pictures of his ankle on his Instagram account, and even though we’re a long way from the the start of the new season, you can help but be a bit worried.

His ankle is swollen up massively, and in a couple of the shots looks like somebody described a foot to an alien who had never seen one before and asked him to draw one.

The caption says: I put up with as much as I could … and it was worth it!!! Very happy 😀

He definitely needs to get some rest now. We prescribe:

His ankle got turned into a right angle. No card. Not even a foul called. Can’t believe he continued.

Then the ref started handing out cards like candy at a NAMBLA meet-up. Fucking awful.

Frog
Reply to  A Yank

There was no foul. It got caught in the grass. The ref was shit, but it wasn’t a foul here.

Just posted a link to the stamp below. There was no grass involved, it was a complete stamp

Either Frog forgot the sarcasm font, or he was a part of the commentary team on FS1. They said the same thing. That he got his foot stuck on the astro turf and that’s why he fell.

A Different George
Reply to  bournegooner

They did say it, and showed it in slow-motion replay, long before the foul. But why believe your lying eyes?

A Different George
Reply to  A Yank

I don’t think that foul was what caused the injury. It looked like he turned it in the first half, in one of the seams of the pitch, which was laid on top of an artificial surface. He was limping from then on; Brad Friedl (yes, ex-Spurs, but not blind) pointed it out immediately, and then that Alexis seemed okay when running to his right, but not his left. The subsequent three dozen or so fouls he suffered did not make it better, I’m sure. But not the initial cause.

TommyGun
Reply to  A Yank

His ankle looks as fucked as our economy.

Dan Hunter
Reply to  A Yank

Bloody hell it looks like something from Shaun of the Dead

Seriously, some of the comments on this blog. Laughter doesn’t justify it. Squeal, maybe.

Agree but I did laugh a lot, really lot.

Here’s a clip of the stamp. really vicious

That was that twat Otamendi wasn’t it?

How did he managed to continue after that?! this guy has no pain barrier does he? Club docs should look into it, if a surgery has to be done I would prefer it to be done ASAP. Rather than Arsene announcing it on the 3rd game of the season saying Alexis is out for 5 months because “he was looking to come back but has a set back in training and he needs surgery now.”

That was a foul/card. But he turned it before that in like the 5th minute. I agree the ref sucked though.

A Yank
Reply to  Frog

Keep doubling down on being wrong.

that clip was the 4th minute.

Somebody please strap him down because he will try and play regardless.

On a platform surrounded by a moat filled with sharks with lazer beams on their heads….

Tobin,
most of us on here would look at Messi as a bit more than a “tax cheating rodent”.
That is because we follow and enjoy football and we don’t just try to draw attention to ourselves like some people do….

Aren’t you two characters housed in the same body?

I would absolutely call him a tax dodging rat. I would go so far as to call him a snotty petulant child. Oh, I’m sorry, are all the teams you are on supposed to be Barcelona levels of stacked for you to succeed? That’s not success, that’s just using other people’s talents to make you look better. I don’t see Ronaldo quitting Portugal when they lose. Messi is the best player of our time, but he is a spoiled little brat.

Get well soon lad. We need you fit and ready for hopefully our title winning next season.

Blogs stop wasting your time prescribing the above to Alexis, knowing him as we do, he will do all the above on one leg.

Keep him away from Kathy Bates, for fuck sake.

You obviously know that Sanchez does not follow doctor’s instructions.

He is gonna party on that ankle till the season begins

Damn. He really needs some rest now. I will absolutely lose it we let him go for the Olympics as well. Knowing Alexis he will want to play

England over spudded and as for Glen Hoddle…..what a Spud loving cunt!

I hope Alexis recovers well for the start of the season.

England have no chance with the Spurs contingent misfiring and Hodgson not replacing them. Why Sturbridge on the right and not in the centre?

It is all over now. Hodgson should have played Rashford in every single game. He is much better than Kane and Vardy etc…

For those of us who aren’t English, the last few days have been side-splittingly hilarious! 😀

England Spud it up again.
Out of Europe twice in a week.
Thought Jack did OK imo

Jack grew into the game, but still didn’t do enough, certainly wasn’t the worst player though. Hopefully the games he played will get him ticking for the new season

Setting the bar pretty low there, Rooney was horrific after half time, which made Wilshere’s average display look “OK”. I’d like Wilshere to shine, but I’m tired of waiting for our English players to fulfill their potential, Walcott, Gibbs, Wilshere, Ox. We can carry one or two, but please, not four.

I think we have every reason to be delighted by Wilshere’s performance. Hasn’t played since forever, almost certainly not fully match fit or sharp and still managed to look better than most of the rest.

I feel sorry for Roy, England have always been shit and with the lack of good English players meaning so many Spuds in this team, he had no chance. Imo.

Good to get someone like a Draxler who can play wide but also possibly be converted into a CF in near future ala Henry and RVP.

If Alexis gets a prolong issue, we are left with Campbell, Ox and Iwobi all fantastic near term potential but you feel we need to have more ready made capability. God forbid we play Jack or Ramsey out of their better positions and in wide areas again.

Hoddle kept saying walker is the best right back in the PL by some distance.

Forgetting that square hair headed cunt can’t defend for shit. And also forgetting a Mr Bellerin who is ten times as good and made the FA player of the season list as right back.

Hoddle slowly explaining why it’s better to shoot on target than not. Duh.
With the commentators at this level is it any surprise no one understands football tactics in this country?
That’s why we always lose.

Wilshere, Cech, Hector, Alexis can now all get some rest. Hopefully Giroud, Kos, Mesit soon to follow, but I suspect one of their teams goes all the way to Final.

Well, on the bright side, Iceland did us a favor by sending us back Wilshere without an injury.

I love Sanchez but I think ( not referring to the tournament) he puts unnecessary physical strain on himself to the point where it can encourage injury.

He was slowly reintroduced after his 3 month layoff but prior to that, his time at Arsenal he has been overplayed.

I think I read somewhere that Wenger was not going to play him for a couple matches and instead rest him, but he gave in to Sanchez demands, which is frankly ridiculous.

I hope he recovers gets a good rest, and doesnt do a dick move and overexert himself.

At least Jack didn’t get injured.

Yep, great news…and of course there’s no injury worries at all for the poor abject spuds who helped England do so well last night.

Can someone draw up some blueprints for a golden retriever pulled cart for Alexis to ride around in for a few weeks then whip it round to him before he cha-cha’s that foot clean off.

No looking at footballs

Can anyone make some sense of this Juventus shit that I keep reading? Apparently they’re in for Alexis. I don’t fucking like it. Those cheating bastards can fuck off.

Conchetumadre
Reply to  Frank the Gooner