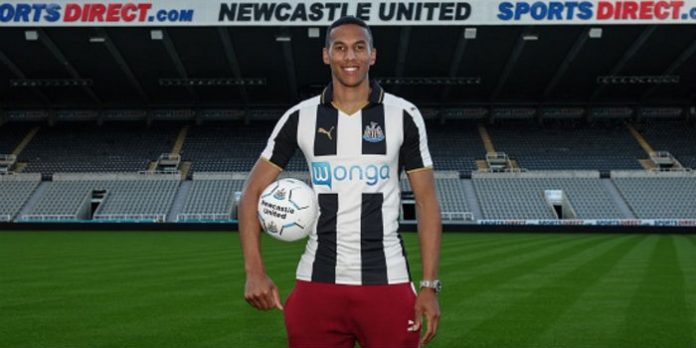 Newcastle United have confirmed that they have signed Isaac Hayden on a five-year deal.

The 21-year-old came up through the Arsenal Academy, captained the under-21s and made a couple of appearances in the League Cup before spending last season on loan at Hull City.

His experience in the Championship should stand him in good stead for the challenges ahead at St James’ Park where Rafa Benitez is trying to inject his squad with youth.

Speaking about his move to the North East, Hayden told Newcastle’s official website:

“Newcastle is a massive football club and to be given the opportunity to come here and progress my career is fantastic,” said Hayden.

“Being at Arsenal was a great experience, I learnt a lot there and have a lot to thank them for, but I needed to move on and so when Newcastle came in for me I jumped at the chance.

“I am still young but I want to get as many games under my belt as I can and help the team bounce back to the Premier League.”

There were also warm words from Benitez: “Isaac is a young, strong English player with fantastic potential but also with some experience already of the Championship. We welcome him to the Club.”

Good luck to Isaac, no doubt we’ll see him in the Premier League sooner rather than later.

Good luck Isaac, no doubt you will have a good career. Let’s get some more business done. COYG

Not happy about this, he’s a good player but he never really got his chance with us. Good luck to him though

Midfield is stacked. At some point it’s no longer fair on the player to keep on loaning them out.

Best of luck to him, but he’s simply just another in a long line of failed English players at Arsenal.

We used to have some great English players, now we have Wilshere, Walcott, AOC, Chambers, Gibbs and Jenkinson. None of which are of the desired quality or fitness for a title chasing team.

Really did think he’d become a cb option for us…oh well. Best of Luck Hayden. Hope you boss the championship and come back to the epl as quick as possible.

As a Newcastle United fan I don’t know much about the kid. What can we expect from Isaac? And what are your opinions on his transfer? Cheers.

He’s quality, but obviously not the finished article yet. Kind of sad to see him go, but he wouldn’t have broken into our first team on a regular basis for two to four years due to the number of players ahead of him. He’ll do well for you.

Arsenal website says its an undisclosed fee (as usual), but do we know the sort of transfer fee they paid us?

Quality player with a good attitude, all the best to him. I’m sure he’ll have a good career at Premiership level soon. Another one in the long series of centre-half/defensive-midfield academy prospects who didn’t make the breakthrough at Arsenal. With centre-halves we have to go all the way back to Adams and Keown..

Young, quick and calm in the ball.

Really hoped he could have been an internal solution for centre back.

Thanks for that showing on the final day of the season, here’s a promising youngster.

Best of luck to him

Congratulations Isaac. Wishing you a long and prosperous career.

An Arsenal youth legend. Wishing nothing but the best for the lad.

Yes, congratulations Isaac. After that Spuds game we owe Newcastle. I’m happy for us to help get them back in the premiership.

He already got his good display out of the way this season, I’ll pass.

This is one of those situations where in an alternate reality, he wouldn’t have got injured at the time we were looking for an internal solution CB and he would’ve got his chance and broken through like how Bellerin and Gibbs did.

Sorry, Off topic but mentioning Afobe…. Anyone know what’s happened to Chuks Aneke?

Would mean Wenger will be looking for a more complete product at Cback. Also DM is filled so a good move as Isaac will work under Benitez. On the subject of Newcastle (who have under their wise leader Ashley) been firing managers since Bobby Robson got the boot for having them around 5th spot, they have been slipping down the ladder which is a cautionary tale for clubs who think they are bigger than they are and that firing managers can only lead to improvement. And staying with Newcastle, how good was Sissoko in the finals? He needs to be… Read more »

According to Wikipedia he plays for Zulte Waregem since 2014.

Not happy to hear this, 1. He never got a chance 2. It reflects badly on us as this is another “next best thing” that has been let go 3. There’s nothing about a sell on clause, if this guy goes on to be the next Afobe or better then we’ll deservedly have a lot of egg on our face. Having said all that, good luck to him, I hope he goes on to have a good career.

Good luck to you, Isaac. Just wish you’d been given a chance at Arsenal though… ?