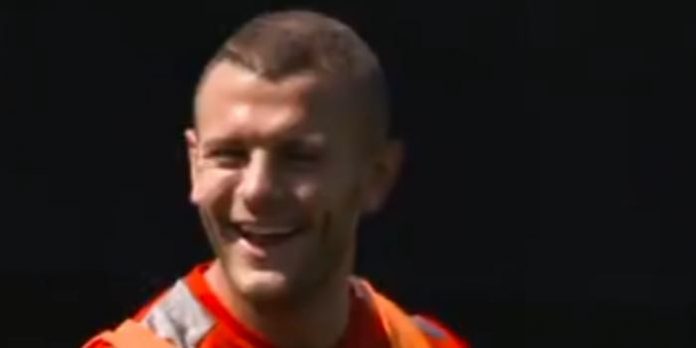 Jack Wilshere has hailed the qualities of new boy Granit Xhaka, saying his experience of playing against him makes him believe he’s the right fit for Arsenal.

The Swiss international joined the club earlier this summer for around £35m, the kind of price Arsene Wenger only pays for a first team player – so it’ll be interesting to see where exactly he’s going to use him.

Wilshere is pleased with the arrival though, getting his first glimpses of the new number 29 on the US tour.

“I’ve played against him a few times at youth level for England and also for the first team with England, so I know him quite well,” he told the official site.

“I’ve always thought he was a good player, he’s very strong and has got a good left foot. He’s a leader, he can hold the midfield together and can get things going from back to front. He’s a good signing.”

And it looks as if Xhaka has undergone his initiation while on tour. Traditionally a player has to stand up in front of everyone else and sing a song.

Based on the evidence we would not advise him to give up the day job just yet.

Thankfully he’s a much better footballer than he is a singer.

Fuck me, the guy’s got talent! Lady Xhaka.

I’d thumbs up but Pique ruined it.

I bet Lacazzete wouldn’t do any better.. Lol

On my way out.

Question now is who plays alongside Xhaka?? Not santi because it would be suicidal defensively. Both are not the quickest. Ramsey is a good shout but he lacks the tactical discipline. If he could control his antics, he’d be a superb partner. Elneny would be great, but he’s not that creative. Very energetic like Ramsey(slightly more disciplined tactically). Jack I don’t know. He did a good job in his breakout season as song’s partner, but he isn’t that strong defensively. Coquelin is great defensively, a bit underrated on the ball but not creative enough. Xhaka isn’t a b2b so it… Read more »

Hahaha, you might win midfield but where will your creativity in Midfield come from?

Loads of options in a long season, I think we have the midfield “injury gods” covered…COYG!

Why on Earth did you just say that…?!

Unless we play 4312. We don’t use width and cross much anyway. Bellerin and mon real could provide width. Ozil plays as no10 and we have a partner for giroud.

I’ve thought about that myself and it is tempting. Xhaka looked quite comfortable dropping back between the CBs for Switzerland, which could allow the fullbacks to play further forward. My one big concern is that Monreal doesn’t have the speed to be particularly effective in that role. Definitely worth consideration though.

Maybe it’s an indication that we plan to play a deeper defensive line (as alllllllll other BPL clubs do). I haven’t seen much of Xhaka I’m not gonna lie, but when I watched him play at dm, it’s not that he’s slow but his position is so good that he was never caught out of position and I don’t think I saw him actually sprint once. Very calm and collected, he bossed Switzerland’s midfield and dictated play from deep. Something we’ve struggled with and relied on per a lot as Coq doesn’t have the ability to spray long balls from… Read more »

Imo it seems Xhaka was brought in specifically because he would work well with Ramsey. Xhaka is a beefed up fusion of Flamini physically and mentality with Arteta’s tempo controlling and passing. And Ramsey works better with a player like Arteta that covers his passing deficiencies (we’ve seen how he is when paired with someone who can’t pass that well). Not sure why a 4-3-3 would shift Ozil wide either. A 4-3-3 may even bring out the best in both; pushing Ramsey with Ozil and Xhaka behind, with the team transitioning to a 4-2-3-1 without the ball as Ramsey drops… Read more »

Is there even such a midfielder?

No, he has to be a bit like Khedira. Ramsey and Elneny are the best bet for me. Coquelin comes next in games where we need to defend.
Santi will be the worst to partner him. We’d get overrun it won’t be funny. It would be a bit like the game against west brom when Arteta played alongside him.

Vieira. Apparently we have failed to replace him every summer since he departed despite there being no other midfielder quite like him!

I love me some Coq and hope to see them playing together, at least in some fixtures. But I’ve got a feeling this might spell the resurrection of Ramsey. The only time he looked like an actual central midfielder was when he played with Arteta. Ramsey is a runner, not a distributor so he really needs somebody with him that can keep the passes ticking…and in comes Xhaka. Plus Ramsey had a great Euros and his confidence must be booming. So my guess is that he will play Ramsey + Xhaka, if Aaron doesn’t grab this chance then that will… Read more »

I’d have as vice-cap but my money is on Santi and Cech as captain this season.

Im quite happy with our midfield this season, as long as everyine stays healthy *knocks on wood*

The Koss as captain!

If fit Jack -Xhaka is our best central midfield.

IMO Jack is behind, Xhaka, Santi, Rambo and El Neny. He has the most to prove. He’ll get his chances, but he is way short of where his career should be due to injuries and being a bit of a knob

I feel for you blogs, having to listen to that

Can’t wait to see Xhaka in action. I hope Wenger signs up Mahrez, Lacazzette and a decent centre back this week. It gives the three time to settle in the squad.

Then poor ol’ Bob woke up to the reality of another Arsenal Transfer window :'(

Thankfully we signed him because he sings with his feet.

I Khant believe Xhaka sings better than the wife of that tall guy at nou camp….. I can’t wait 4 d season to start… Good to be a gooner….. The most talked about team in the workd

Ramsey is on the right this year, he’s not good enough to play in the centre

Sub off Santi/Ramsey for Jack or Elneny/Coq
I rate Coq, but think Xhaka has pipped him in the likely running order.
I can’t see Mahrez coming due to Ox, Gnabry and Walcott all being wide right players.
Even if he’s superior to them all, Wenger isn’t going to fuck them over. Will patiently try again
with at least 2 or the 3 I’m guessing

Wenger should be given HUG credit for signing Granit early at 30M. There are plenty of teams with resource and want that would have eagerly snapped him up. The fact that some people like to moan about Wenger and spending or rather not spending shows how ignorant they are of the market and how this man has successfully operated. If anything Wenger flatters to deceive because he buys well. The dud purchases he has made (and there have been a number) one should remember were minimised in impact to our bottom line because he generally pays low. The market is… Read more »

I mean huge credit but give the man a hug too.:D

can’t wait for a Granite coq facing the cunts at the bridge
.
.
Don’t worry i’ll show myself out

I stay in Santa Clara

I met them today!
I saw the entire team today. Took selfies with Xhaka, Cazorla, Cech, Wilshere at San Jose today. I saw Mr. Wenger ?
I wish I could upload them here somehow :X

But this will not make sense if we are still intending to sign Mahrez.

We’ll see as it uncovers….

I always thought that Jack was going to be that guy for Arsenal. I see Xhaka and Wilshere as competing for exactly the same position in left midfield. They are both left-footed players (if we get Mahrez and Lukaku then almost the entire team is left footed which could be amusing). I think its importantly to note how Xhaka is quite tall, unlike the rest of Arsenal. Having at least one other tall player in the team means that Giroud isnt as essential. Should you get a 5″9 striker like Lacazette, Arsenal wont be that much worse at defending set… Read more »