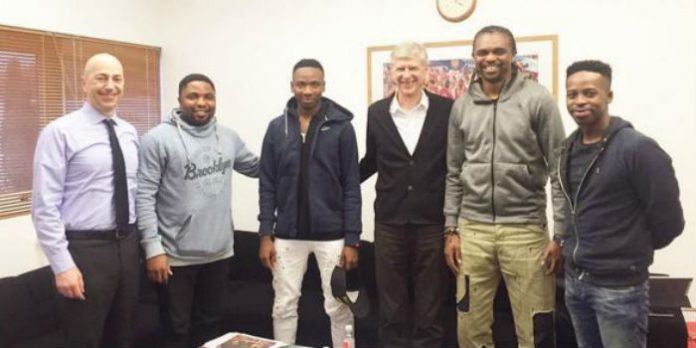 It would appear that Nigeria youth international Kelechi Nwakali has finally signed for Arsenal.

The midfielder, who was first linked with the Gunners in December 2015 after impressing at the under-17 World Cup, is understood to have penned his deal on Wednesday after a series of international commitments.

Yesterday, Nwakali took to Twitter to post snaps from London Colney as he confirmed he’d taken part in his first training session as an Arsenal player.

Back in January, the boss said of the teenager: “We identified Nwakali as the player of the tournament [at the under-17 World Cup], basically, and as a top player. We will see if we can manage to get it over the line during this transfer period.”

Obviously, it took a lot longer than that in the end. We think a £3million fee was agreed with the Diamond Football Academy, so let’s hope he was worth the wait.

This is like the forth time we have signed this guy

We signed him a while ago, just officially confirmed now.

What happened to the other one? I thought it was two of them on the radar.

Chukwueze went to Porto instead

And Kanu is back to solve our striker crisis!

At first glance I thought Kanu and Sterling were in the pic too.

That would be because Nwankwo is indeed in the pic 🙂 He apparently played a big part in getting Nwakali to Arsenal.

Who says we aren’t active in the transfer window?

I’m curious as to how Nwakali got a work permit under Dyke’s new rules?

Blogs, is that one of the Audis you are getting for next weeks Arsecast?

Sixtay
Reply to  The Lawyer

You know they did tests in the previous tournaments, right? Age cheats existed in the African and South American age-grade tourneys but since 2009 MRI bone density scans have been a necessity.

Now independent practitioners carry out scans on the team before selection (hence the news you posted…that wouldn’t have made the news pre-2009) and CAF/FIFA also carries out the same exercise before and during the tournament.

Nico
Reply to  The Lawyer

One shall not deface the beautiful Arse-sites by posting links to any *****Bible sites!
It has been spoken

preach it on arsebible.com brutha

Decent punt for the future and 3million these days is peanuts.

Good to see that Wenger still has an eye for the future of the club despite his imminent retirement in the next few years.

Now about that striker…

Just so you all know, this kid is going to be converted into a striker and provide backup for Giroud next season. Then Gazidis will qualify this with: ‘What do you mean? Of course we spent big money? £3million is loads of money to pay for a person. Think how much land £3million could get you. Or how many Lamborghinis that would buy. This is just one person, that’s a lot of money for one, single person.’ I feel like Gazidis would be one of those parents that when the ice cream van comes and his kids really want a… Read more »

I quite like choc ices, quite partial to a good old 99 flake but in my day fab ice lollies were where it was at.

intersting that he posted a picture with david dein a couple of days ago https://twitter.com/Kelechi_nwakali/status/759008739819003904

I like how everyone in that photo is in casual gear, the youths in their hoodies, kanu in a jacket and combats, even wenger chillin in his nan’s cardi, then you have gazidis in a suit and tie. he seems like the kind of guy who relaxes at home fully suited.

Grow my boy and be a blossom into a Yaya Toure!!! Good things take time… Although it could have been good to be in the squad for preseason! Any how all the best to him and welcome to the best club in the world!!!!

will we get a work permit? city got one for gabriel jesus and he’s done less on the international scene than kelechi

Way off topic but am I the only one who thinks this is creepy … http://www.arsenal.com/news/news-archive/20160804/pics-behind-the-scenes-at-photocall-day

Consider photo number 16 for just a moment … what/whom is he hiding from?

Best news about all of this is the price.

For a while it seemed like football will imitate the rest of the world whereby “trickle down economics” wouldn’t happen, but it certainly is.

A few years ago such a deal would’ve been worth a couple hundred thousands, but nowits £3mil. That money would make a huge difference to the academy.

Unrelated, did you guys see someone wants to send Mourinho to jail over his treatment of Bastian. This guy is just so toxic…

Why not get Javier Hernandez from Leverkusen (formerly of Man U)?
We need a experienced striker, do we not?
Go on then, Arsenal, it is not rocket science.

That isn’t Kanu , that’s his father.
Why do you think Kanu would be involved just because his the boys idol??? Get real.

Kanu is his agent.

What are you smoking….of course that is Kanu.

Brilliant! Just what we need!

It’s been going on ages.

If we were any good at getting work permits we would have signed Pet cech 10 years ago…. there ya answer!

Lol. I like the sound of “a big part”. I suppose you are referring to his fees?

Ignorance would be believing that age-cheating has been ended thanks to MRI scanning. The scan still manages to overlook a lot of over-age players. When Nigeria hosted the U17 tourney some years ago, Fortune Chukwudi, captain of the team, was reported by Adokiye Amasiemaka, President of 4harks Football Club of Port Harcourt Nigeria, to have registered for Sharks 10 years prior, as a 17 year-old. He had scaled the MRI scan.

Funny that it is the players that announce their signing these days. Is Arsene now embarrassed to be signing kids? It used to be a thing of pride.