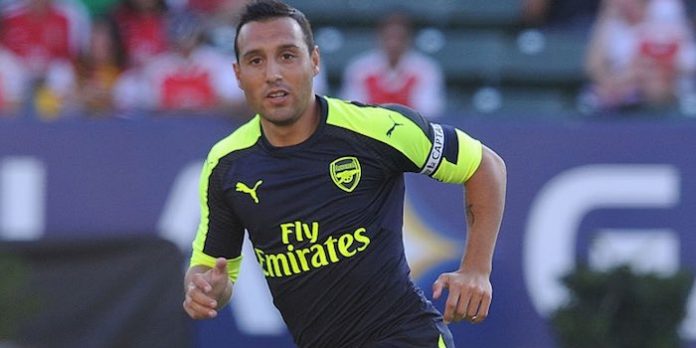 Santi Cazorla is unlikely to be ready for the start of the new season as he steps up his comeback from the injuries that affected him last season.

The Spanish international suffered a knee ligament injury but has been plagued by Achilles tendon complications. It means Arsene Wenger has had to ease him back into action, and the boss admits it may take him a few weeks extra to get back to full fitness.

Cazorla played against Chivas on Sunday night, but Wenger says he’s not necesarily counting on him for the first few games.

“He is our technical security in midfield and we missed him for five or six months last season,” he said.

“At the moment he is not completely there on the fitness front. That’s why I took him off at half-time.

“He’s a bit behind the others physically but I think he will be alright, maybe not on August 15th, but at the end of August he should be alright.”

With Mesut Ozil sidelined due to his late arrival back from the European Championships, there is a space at the ‘number 10’ role which Cazorla would have fit perfectly, but if he’s spend more time getting fit, it remains to be seen how the Arsenal manager fills that particular gap.

Alexis can play there, not a big issue I don’t think, not for a game or two anyway. Start Iwobi on the left and Ramsey on the right. We have much bigger issues at CB and striker.

Aaaand I just remembered Alexis may not be ready either. By the time the first day of the season rolls around we may be playing Flamini, having signed him up again.

Ramsey at 10 then with xhaka and coq behind
Not to mention Wilshere, eleneny & even oxlade who can fill a position in midfield.
We will be alright

Interesting to see if he picks Rambo or Wilshire. I think wishere is more creative and crafty, but Ramsbottom has sheer perseverence and will roam more. Both are ‘brave’ enough to try those tricky forward passes in the final third.

Haha was that an auto correct or a brain fart?

He might even go for Ramsey at 10 (considering how well he played the role for Wales) with Wilshere and xhaka just behind? Who knows. But we have plenty over cover. Be interesting to see what wenger does

Rambo does ever so well in the middle

Ramsey is in the same boat as Ozil so I’ll be surprised if he even makes it to the bench on opening day. Wilshere got injured again but seems to be alright for our next friendly. I like how we still consider people who cant stay fit more than a few games “plenty of cover.”

Ramsey had his best season when paired with Arteta behind the front 3-1. I see Xhaka as a similar player to Arteta (but with a nice touch of nastiness thrown in), so I’d like to see if Ramsey can replicate his 2013-14 form next to the Swiss general.

I demand an enquiry as to why this has happened now instead of November or February.

Let’s just get it over with. 😉

Our version of a leap year, I think.

Jack Wilshere wears the No.10 shirt.

Jack is a joke at the number 10 spot. If he’s left as the main creative influence until Ozil returns arsenal are in trouble. I would play Ramsey and then slot in xhaka and eleneny

Feel like a déja vu ! The obvious holes in the team not filled yet and 14 days to go. Per out , Santi not ready, Jack injured again, Mesut Alexis and Kos still on vacation and Klopp’s coming with his mugmashers in full force having already secured his transfers targets… we know the ending of this story already. Damn I love this club but am worried if i can’t take another season of the same old same.

I wouldn’t want it any other way! COYG.

That makes one of us

This doesn’t seem like the year to start slow and then be forced to play catch up. I dread being behind the 8 ball at the start of every season but even more so this year.

Shit teams always get their transfer business done early – it doesn’t take much to improve them. All the top clubs in Europe have got their main man and are waiting to see how the market pans out.

Which top clubs wait to mop up leftovers?

I read this as saying he may not be fully match-fit–may not play90 minutes–rather than he’ll “miss the start of the season.” But I guess we’ll find out soon enough.

Happy to see him rested, can’t take any risks. Midfield is one of the areas where we have some scope to rotate, Elneny, Coquelin, Xhaka, Iwobi, Ox and Wilshere should be enough to get us through until the end of August. Throw in Cech, Monreal, Belerin, Chambers and Gabriel at the back, who should all be fairly well rested, with Walcott (I know I know) and Campbell further up top, we have enough to get through the first couple of fixtures. A couple of signings would be brilliant, Mustafi/Lacasette/Mahrez would really add to the depth. And then when we have… Read more »

This is a feckin joke. Did Cazorla go to the Euros? If not that’s two players who didn’t who are injured and miss the start of the season. Every year it’s the same.

dude he was injured for 5 months and he didn’t play a competitive game once. he is lacking match fitness because of not playing intensive matches for 5 months.

Reading , takes too much time??

Please explain. To my mind neither Mertesacker nor Cazorla went.

Got Ramsey/Wilshere there with Xhaka and Elneny behind, we should be fine.

if you read carefully it says as a result of cazorlas knee ligament injury its taking longer for his achilles to heal hence he is not being rushed back.
seriously we have some dumb supporters at Arsenal they don’t even try to understand and just keep bitching
if there was a PL title for bitching about anything and everything Arsenal fans would win the title every year

We have so many options for that position. Let’s not forget about Iwobi.

Well, yeah. Ozil is the starter in that spot. Nobody’s replacing him, but since he probably won’t be ready to go for Liverpool, and now Cazorla might not be, we are only left with Ramsey, Wilshere, Iwobi. We’re stacked (in that position).

The injury gods are angry and require a sacrifice to appease them. Fetch me ivan the terrible (at his job)

Just wonder what our starting line up will be aganist Liverpool. Lots of questions, if Gabriel doesn’t play a single pre season game is he match ready enough tostart a high intensity game?The likes of ramsey,ozil,koscienly and alexis would have only had a week of training. Walcott will probably be upfront. Gotta admit not easiest transistion into the season with tough games ahead

I hope Wenger realises that the Liverpool game is on the 14th!

Elegant little player. We really missed his influence last season particularly passing from deep to quick release our counters and his ability to carry the ball from deep/retain possession. To some extent the former is also why Granit was brought in whilst the later (sans Diaby) is mainly replicated by Jack but without as much assurance in terms of retention. Santi covers both the midfield link role (Effective next to Coquelin and more so for Coquelin than him) but also Ozil. In absence, we have Ramsey to cover Ozil IMO and Jack to cover Santi. As Jack is also injury… Read more »

In the absence of Ozil, Cazorla, Wilshere and Ramsey, I’d play Joel Campbell
as our playmaker in chief. He’s a natural for the role.

Id look at campbell at cf in preseason. Or on the right wing hes been great there.

I’ve heard Campbell, can play/has played CF for Costa Rica before, don’t know if true or not.

Not a reason to not buy a striker but hey, good to have depth, rather see him there than Walcott, Campbell would be a useful option to press the defence and apply pressure to them.

just read it is, would be interesting to see him play there

If we can get the PL teams to play against us the way teams play against Costa Rica then he would be a real good option.

I think so. Maybe Joel can make impact for no.10 role. But my gut feeling says AW will pick Iwobi instead on the 1st day of the season

Carzola looked pretty good to me for his first time out last night vs Chivas, but of course the running/movment in a friendly is far different from a PL league match (much less the opener against a very high tempo team in Liverpool). I would think in two weeks when the season starts he would be able to get closer to match fitness and at least be able to play 60 minutes or be a sub off the bench if need be. If Wilshere is out for a week more then he’ll be lacking match fitness too and it may… Read more »

Usual injury stuff then….we are nothing else but consistent in all respects..:-(

Damn. Would be great to have seen him boss the games from the middle for a few games again before Özil’s return.

So hard for some people to read and digest the information, even if the title is mis leading.
All Arsene said is that Cazorla is behind on preparation and will not be fully match fit till possibly end of month not he wouldn’t play till end of month.

Cazorla is our second playmaker behind Özil. If neither of them can play, then what? Are we going to “Stoke” our way past Liverpool and Leicester? Or what? With Ramsey just coming back from the Euros, having only three or four days more “holiday” (that is, having not played the semi but still being there, taking part in training, etc) than Özil, Kos and Giroud, I don’t think it’s a good idea to throw him into a game at the beginning of the season. (I just hope Santi will be fit. One of my favourite players, up there with Mertesacker.… Read more »

So you would like for one of our players to get injured?
Think about it !

I say we make Ibrahimovic our Captain for this season.

We are stocked in midfield but the technical quality of cazorla and missing oil means the team has to really compensate for creativity. Add that Alexis and Giraud are missing that is a problem with firepower.

Strangely not worried. There are players itching for opportunities at the club in that position. Let’s see what they make of it.

Is Giraud a new signing?

Yeah, he joined at the same time as Oil.

Wenger says the midfielder may not have regained full match fitness by the start of the new season, potentially adding to his shortage of players for the opening game against Liverpool on Aug. 14.