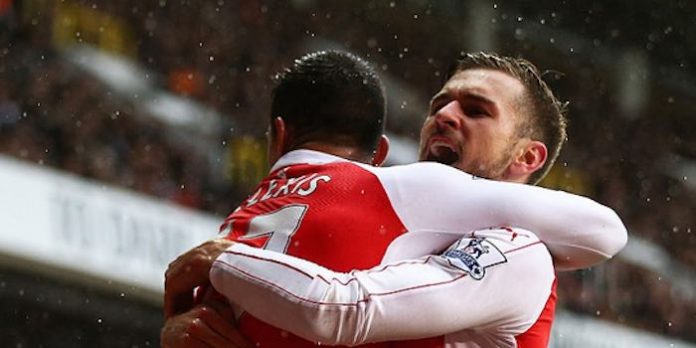 Arsene Wenger has confirmed that Alexis and Aaron Ramsey will begin their pre-season preparations in earnest this week after recuperating from their exploits on international duty this summer.

Alexis picked up an ankle injury in the final of the Copa America Centenario on June 27 while Ramsey was kept busy, even though he was suspended, until 6 July when Wales lost to Portugal in the semi-final of Euro 2016.

Arsenal play two more friendlies before kicking off their Premier League campaign against Liverpool on 14 August; first against Viking FK in Norway then against Manchester City in Sweden.

“Not all of [the international players will be back],” the manager told Arsenal Player after last night’s 3-1 win against Chivas de Guadalajara in California.

The boss also reserved praise for Alex Oxlade-Chamberlain after the England international lit up last night’s win with a fine solo effort; his second of pre-season. The midfielder has missed big chunks of the last two seasons through injury but appears to be in fine fettle at the moment.

“This is a very important season for Alex,” said Wenger. “He was out for a very long time, I’m cautious with him at the moment but he’s getting better in every game and that’s good to see.”

Completely of topic. But does anyone remember when we had a youth prospect called Tom Cruise?

Whatever happened to him?

He joined a Cult and went completely mental.

Thomas Daniel Cruise last club was Torquay according to Transfermarkt.

He had a couple of injuries and then had a trial with the New England Revolution in American and Sampdoria of italy before joining Torquay.

He wont come out the closet,no matter what R Kelly says

Ease off on the emojis.

Emojis are marginally less annoying than keep calm and carry on pictures.

Snake in the grARSE
Reply to  Calm down Badal ?????

Stop playing with yourself.

The squad is set. There will be no more transfers. Holding is the cb we were looking for and a healthy ox is lans. Wenger likes to build teams, mourinho is the one who buys them. Realize that our transfer window is over and move on.

It is not over.

We need a striker with Welbeck out injured and Arsene will buy a striker.

What has led you to this conclusion? Ah, of course Wenger’s proven track record for buying… Oh wait…

Oh please, please Arsene do not play Ramsey on the right again this season, please……. Rather play the Ox there!

I’m thinking Xhaka’s been brought in partly so Ramsey can play in the middle, but what’s your issue with Ramsey on the right? We played our best football last season with him in that position.

And what about Özil? Time to sell him?

Hopefully Alex turns into another Alexis

I hope Wenger does still strengthen the squad, as if past seasons are anything to go by at least three players will be out with long-term injuries inside the first three weeks. The BFG has already succumbed to that particular curse, and there’s bound to be more besides him.

Off topic…Can we please move Walcott on.

OFF-TOPIC: This is with respect to the Yedder deal with Sevilla and how it’s mentioned in media that Yedder turned us down for Sevilla. It’s funny how people think this is true because some media spun it this way. You think Yedder would be first choice at Arsenal? Nope. He knows. He isn’t the striker we’re seeking. At Sevilla, Gameiro left, and there is a new coach, so there is a good future there, with Champions League et al. There are a lot of factors why people choose a club, and I doubt Arsene felt strongly enough about this guy… Read more »

Josef the not so dreamy dreamer

And a great game at the Emirates, Theo Walcott completely bossing Klopp’s kop defense and earning himself a hattrick and his team 3points…. Just then my room mate at the University woke me up. Could this dream ever come true?

So on the right will be Alex (Ox) and left Alex(is), thus we need another Alex op top to complete the trio.

Guess what Lacazette first name is?

I’m thinking Iwobi as a striker 🙂