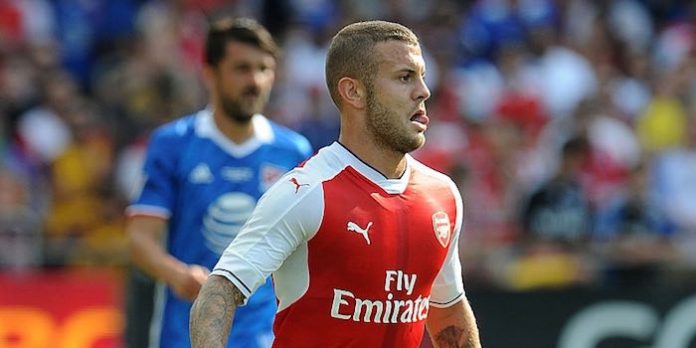 Arsene Wenger says he expects Jack Wilshere to be part of Arsenal’s tour of Scandinavia next week despite the midfielder picking up a knee problem in the US.

Wilshere was not in the squad for the 3-1 win over Chivas on Sunday, and the Arsenal manager explained his absence afterwards.

“Jack has a slight problem with his knee,” he said. “We think he should not be very long, he should come back quickly. Maybe next week.”

Asked if it was a recurrence of one of the injuries that has plagued him in recent times, the Frenchman played down those fears.

“No, it’s a slight patella problem,” he said, “but I think he should be with us on the tour on Thursday.”

The Gunners take on Viking FK at the Viking Stadion in Stavanger on Friday August 5th, before facing Man City on Sunday August 7th at Ullevi stadium in Gothenburg.

Hopefully Wilshere will make it, but there’s always that part of you that worries every time he picks up a knock.

This time last year, almost to the day, Arsene Wenger said of the 24 year old after he suffered an injury in training, “We don’t think it’s bad at all but I haven’t been told whether it will be two days or five days.

“I don’t know how long he will not be available for. It’s a matter of days.”

Wilshere next played for Arsenal on April 24th. Fingers crossed this time it’s as short-term as he says.

Wilshere has to pull through this season. It’s now or never for him. Needs to get at least 30 games this season and put in some strong performances. Love him to bits and want to be the next Mr Arsenal so hopefully he can have an impact on the pitch and not be on the sidelines for most of the season.

Solpediene up jackie boy and play a bloody season for us!!

30 games? how do you propose he does that? he’s not even a starter on this team.

Fully fit, maybe he is. Only Ozil is really untouchable in our midfield at the moment, and that’s only if we keep the current formation

Fully fit, he never is. Apart from one season, there’s ample proof that Wilshere is a luxury player, nothing more. For the small handful of games he’s available each season, he’s kind of nice to have around, but then you have to ask yourself whether Arsenal can afford such players.

You get a thumbs up from me for stating the blindingly obvious but get ready for a ‘hidden’ for this. You don’t get away with saying things like that on here.

Cheers, Hunter. Yes, I’m fully aware of the climate in this forum. I don’t mind being downvoted. To be honest, I don’t like the truth either! I’d much rather Wilshere was firmly on his way to legendary status, but he’s never been the same since his breakout season (when he was played every single game), and that’s largely to do with being so injury prone. Like it or not, we can’t expect Wilshere to be a consistent performer for Arsenal.

if he’s not a guaranteed starter as some suggest, what is our starting mid (assuming we play the same 4-2-3-1 as last year)?

Damn, this lineup will miss Welbeck and Mert. We really need those other striker and CB options.

The patella, also known as the kneecap or kneepan, is a thick, circular-triangular bone which articulates with the femur and covers and protects the anterior articular surface of the knee joint. The patella is found in many tetrapods, such as mice, cats, and birds, but not in whales or most reptiles and amphibians such as snakes or frogs.

So John Terry has no patella…?

John Terry IS a patella. And not a good one.

I thought patella was when you mixed pate and Nutella. Goes great on toast.

Change your name mate, you seriously dishonour Dennis with that one!

Got injured smoking a cigar!!?

Don’t thumb that cigar comment down. I live near Jack and know for a fact he buys LOTS of big cigars. Which seems pretty a pretty fucking stupid thing for a top athlete to do. Hopefully he’ll grow up a bit this season, he could be so fucking good if he puts 100% in and stays fit.

Yeah I go through my neighbour’s shopping as well

No mate just seen him in the tobacconists a few times, bit hard to miss TBH

This guy need to shrug off the fuckin injury otherwise he will ended up like another wasted talent in shadow of diaby.

Rather, I think you’ve woken up on Groundhog Day to the sound of “I Got You Babe” by Sonny and Cher.

is that like next week but in a different year?

It’s the week we just left behind.

In retrospect, it makes sense that Wenger wasn’t told whether it would be two days or five days.

What we need to do is fill his body with adamantium, he won’t be so brittle then.

*wishes such a thing existed*

Must have bones of same material as Abou Diaby.. Gotta feel for the lad though.

Anyone know when the team will be arriving Stavanger Norway? Will there be an open training for fans? Would like to know so i can take the day off work 🙂

Please, it’s not my place to demand this but if we could use the Diaby name with some respect, it’d be great. It hurts to see his name being dragged about like this every time someone gets injured. He’s an Arsenal legend, we might not know yet and we might never realise sadly.He brought it all and gave it all to us, and by all I’m including the PAin of a thousand broken bones he endured, world class skills and the fortitude to endure our insults to this day. In a way he’s like a Van Pussy, the Arsenal legend… Read more »

Legend in the sense u think he exists not in the sense of Berkamp or Adams. I’m being flippant. Diaby is a former player nothing more. Though I agree with u about his name etc.

the man is caught smoking drinking and club fighting late nights out every other day, I say he doesnt do much to be commited and fit for a fucking month so its not big surprise everytime you know he’s the first in line to be out when not even playing competetive matchs. these players never make it to what they promise, just ask Balotelli. at least Diaby did all he could.

If it’s all the same, I’d rather Jack Wilshere doesn’t play against a team called “Viking FC.” That seems like it is just asking for trouble.

Wilshere’s mind and his body are like two totally different individuals. His mind is Conan the Barbarian recklessly charging in to any situation with reckless abandon while laughing at incoming tackles. You can’t stop ME peasants!

Meanwhile his body is a 80 year old lady with osteoporosis.

His mind is literally writing checks his body can’t cash.

Wilshere injured again. In other news, water is wet, and grass is green.

Can someone clarify that when Wenger often gets injury timelines wrong, it’s a case of him being an idiot, the physios not having a clue or just that he’s waiting for initial scans?

Still only 24yrs. Fantastic player who gives us penetration through the middle. Sans Diaby, he is one of two players who can waltz through the middle of the park for us (the other being Santi) Issue of course is fitness (as is Santi). People who mull over our ‘crowded’ midfield and moan over the purchase (correctly) of Granit should do well to remember we are injury prone. Jack is a massive asset for us should he stay fit. Personally prefer him in the link role carrying the ball where I like Ramsey further forward in the Ozil position as an… Read more »