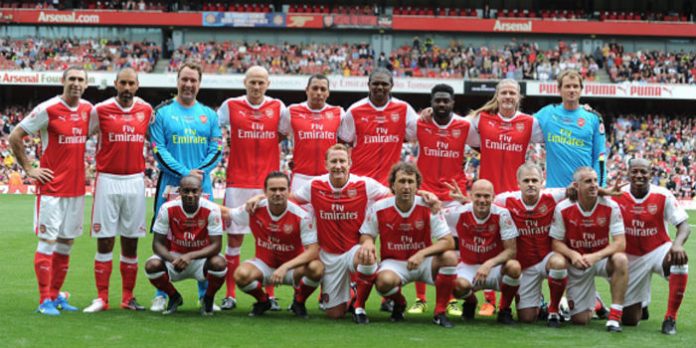 Kanu grabbed a hat-trick and Bobby Pires also got on the scoresheet as an Arsenal Legends side ran out 4-2 winners against their AC Milan counterparts on Saturday afternoon. After the game, several of the Gunners old boys shared their thoughts on the occasion. Here’s a roundup…

Kolo Toure on returning to the Emirates

“It was very important for me to be here. It’s true that I keep playing for Celtic but when I had the chance from the club to come and play with my old teammates, for me it was really, really important.

“Just to see the fans here, I started in Arsenal and I don’t think I would’ve made the career that I’ve made without Arsenal.

“For me, it was really, really important for me to come back here and see the fans, play with my old friends and play with the manager, Arsène Wenger – one of the best managers in the world, for me. I’m so happy to be here.”

Great game today!!! Thanks to all the fans!!!! @Arsenal #arsenalfoundation pic.twitter.com/vlaDuqYmxq

Kanu on being Arsenal’s hero of the day

“This is special because of The Arsenal Foundation, what they are doing and the work they want to achieve.

“It’s a special hat-trick. It is always, always good to see the supporters and to entertain them!”

“Well, I’ve been waiting a long time to get Paolo [di Canio] back. I thought I’m getting a little bit old now so it was a good opportunity. Listen, we had a chat about it before honestly and said ‘let’s just have a little go’.

“He wanted Howard [Webb] to have a join in with us as well, but he wasn’t having any of it! It’s such a fantastic cause today for the charity, and also a competitive game.

“I still play twice a week, but I still say, a lot slower, a lot older, but still competitive!”

“It’s been fantastic, because I was here when Dennis had his testimonial and to come back and still get that reception was just awesome, so thanks guys!”

Did I used to play with this lady? pic.twitter.com/c6pRWzFOPf

“The surprise was Kanu, because nobody knew where he played and he turned up with something special again. Players like Freddie Ljungberg and Robert Pires are still completely fit, and Kolo Toure I’m not surprised about because he still plays for Celtic. The class has not gone, the quality has not gone – the legs a little bit! But not too much. They had enough resources to make the game enjoyable. It is a great afternoon and that shows our values at the club because we raised one million pounds for the charity and we can be very proud of that.”

It was like putting the clock back with the boys! Great people, great times, the best fans. @Arsenal pic.twitter.com/7hXMW4slSz

Things like this just remind you what it is you love about The Arsenal. The transfer window sideshow and media nonsense distract from the fact that at its core Arsenal is a club we all love. Yes, I would like to see a different style of ownership but even just the pictures evoke such great memories of what this club has meant over the course of my lifetime (30’s) that I can’t help but smile. Hopefully the smiles continue when the competitive action resumes this weekend. COYG

Ha ha I love your name.

Seriously incredible how good Pires and others still are. The touch and finesse in their play truly hasn’t gone. Was so good seeing it again.

Honestly, I was watching Petit, and he genuinely looked top class. I was young when he played for us, so I never appreciated him like I should have.

I think all clubs should do this, it’s so great to see old faces and especially if it’s for a good cause. I’d happily see this once a year;-)

You can see that class is permanent…Nice seeing the guys that once made us smile with pride. It’s a shame we didn’t get to see King Henry, DB10 and Viera, it’s understandable though.

Tell DB10 to book a ferry for next year. It’s just not a legends match without him.

Should make it an annual event – looks a great day and a great cause.

The fourth goal reminded me of the 2003-04 season with Gilberto winning the ball back, Ljungberg crossing for Piers to tap in.
Shame there was no Vieira, Thierry or Bergkamp but the afternoon brought tears to my eyes.
Arguably, their time was the highest peak in Arsenal Football history.

Not sure there’s any argument

Yes, I came over all emotional, too. I travelled over from Dublin for the game. I was a little disappointed DB10 didn’t take part, but that goal alone made the trip worthwhile.

As a Nigerian, I started following Arsenal because of Kanu. To see Him Again in the Arsenal shirt again made me nostalgic. This group of players really left a big big shoe to be filled. There’s this confidence about them, you just almost get the feeling that three points in every game is our right! It’s amazing how that confidence haven’t left them, kanu even said He was gonna score a hat-trick before the match..
Good to see our legends again!

Had Nigeria kept on playing Kanu, they would have qualified for the African Cup of Nations 2017. Happy that Iwobi will be available for Arsenal January and February 2017.

Would be a great deal, he’s only 21 years old after all

Good to see Pat Rice back on the bench as well. Top man.

With the effort put in by our old boys I was a little afraid the money raised would go towards overtime for medical staff and cost of resuscitation for most of Milan older boys. Joking aside, great spectacle, very enjoyable.

Keown came on in the 2nd half and changed the game….had a touch of the Zidan about him 🙂

Great day for the whole family, my 3 year old girls first trip to the Emirates and she stood up cause she hates Tottenham

Great penalty save by Lehman. Dived to his right and left hand save to a high ball. Truly awesome

What a beast team we used to have. Emirates build was supposed to take us to the next level, But in hindsight it feels like the day we went from being a football club chasing trophies into becoming a corporation chasing profit.

Great turn out from our lads ,hopefully we can do something again… We’ve got so many legends who could play… Sol Campbell , Lauren, suker, Tony adams , Steve bould, plus the obvious who couldn’t play – Henry , bergkamp & Vieira

Any injuries from the match…… No?

Ray Palour and Anders Limpar that we know of actually…

Went to the game on Saturday in the upper tear of North bank and was thoroughly impressed! The lads turned I’m a brilliant performance considering their age etc… I was really impressed with Nigel Winterburn and Petit and I think Cygan had his best game in an arsenal shirt 😉

Also a mention for Anders Limpar who did very well

I noticed Gary Lewin ont he bench too – has he been sacked by England or something? Would be a bit harsh if so, hardly his fault Harry Kane can’t take a corner to save his life.

Yep, when they said Legends they meant Arsenal Legends whatever capacity they served in Great to see Pat Rice there, and it was good to see some of the non-playing staff popping back too.

Nice day out , shame Bergkamp wasn’t playing, I’m sure his name was there when I bought the tickets, or maybe I imagined it, I did look a bit of a twat , after telling my son he was playing , when he wasn’t , what was the official take on him not being there?

Dunno, but I’d be very interested in hearing it. His name was there when I bought my tickets and right up until a couple of days before the game…. or more accurately, until it became a sell-out.

Am I the only one still waiting for the real explanation regarding Henry and Bergkamp? :-S

it looks as if Kanu is the striker Arsene was looking for…:-)

Amazing Limpar how old he is now. And Petit still has his locks. Llungberg looks incredibly fit. Love Nigel’s commitment to the cause, and Keown still intimidating as ever. Some of the players were testimonial to Wenger’s ability in market. How much he paid for Kanu and Toure and Pires, Llungberg…simply amazing. Should remind us of the transfer market and how superb Wenger has been. Generally he bought low minimising impact should the buy go wrong but maximising on profit which helped grow the club before attracting the confidence of the banks for stadium build and more stable income. Also,… Read more »

What a shift that Winters put in!!

Will probably get one after he retires. Would be exciting to see him play at the Emirates again. His goal for Sparta Prague at Highbury against was brilliant.

Thought this was a legend match… Where was Bendtner??!