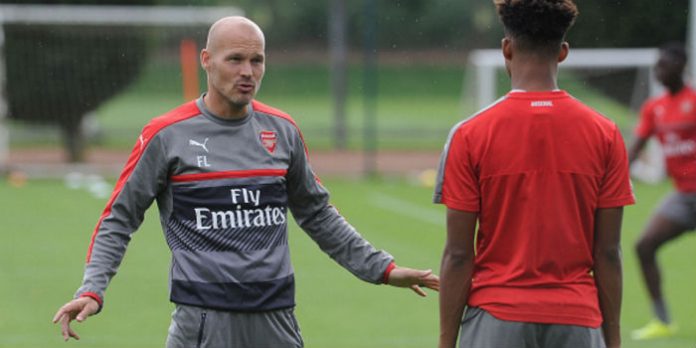 Freddie Ljungberg says he has grand ambitions for his coaching career and revealed he’s already working 60 hours a week with Arsenal’s Academy to gain the necessary experience.

The Swede made 328 appearances for Arsenal before moving to West Ham in 2007 and then embarked on short spells in the USA, Scotland, Japan and India before being welcomed back to the Gooner bosom last year.

The 39-year-old worked with the club’s under-15s last campaign and appears to have taken up Arsene Wenger’s offer to fill the position left vacant by Thierry Henry, training Kwame Ampadu’s under-18s.

Looking ahead to the future, Freddie told City A.M: “My vision is I want to go as far I possibly can. But I’m trying to earn my stripes and do it the right way.

“I was offered roles as assistant here and assistant there, but I spoke to Arsene about things and it’s important to make your own mistakes and be the one making the decisions.

“Now I have my own staff of six people and I need to manage them and for them to feel like a group pulling in the same direction.

“It’s important to give people ownership and I’m not the headmaster telling people what to do. I do 60 hours a week, just trying to coach, coach, coach and get experience and build from there.”

Ljungberg also spoke about why he’s focusing on coaching young players rather than current first teamers, underlining his eagerness to get in the heads of the next generation.

“The main thing why I am doing the younger age groups is they are the future and mentality-wise we are changing as human beings,” he added. “We often talk about them just being on the iPads, whereas our generation maybe sat talking, but there is no point in me saying that because those are the facts.

“I need to change with the times and ask ‘how will I be able to inspire them, get them concentrated and focused’.

“That’s something I’m trying to learn so in the future when these players come up to the first team places, if they ever get a chance somewhere, I will know how they think and what makes them tick. That’s very important.”

Interesting stuff from Freddie, it’ll be interesting to watch how his career develops from here. Good luck to him.

How many of Mourinho’s former players does he have on coaching staff for his youth teams?…
oooooh.

Teams like City, Bayern, Barcelona, Real Madrid, Dortmund etc have a foundation, a strategy and a philosophy in place that has nothing to do with the Manager so when a manager is replaced the club does not crumble like a house of cards. New managers can only change so much and need to work within the clubs boundaries and usually only make squad and team related decisions. Arsenal and Manchester United under Fergie however give/gave the manager all the power and the club is just along for the ride jumping whenever the manager says jump. This left United up shit… Read more »

This reply was both on the wrong article and to the wrong person. Sry about that 🙂

Don’t what you’ve been smoking Frank… but would like to know where you bought it!

Why not
Reply to  FrankTheTank

Frankly, frank, i disagree. For all of the critisicism against Wenger, you have to give him credit where it is due. He plans for the future.

Silky Smooth
Reply to  Why not

Thanks FrankTheTank, although it may be a “frankish” and “tankish”, what you said was by no means “cunt’ish”. What happened at United was absolutely a delight to witness, something we don’t wish on our enemies, and therefore we certainly won’t wish on ourselves. That whole Giggs saga is something I would never have wanted Henry to experience at Arsenal, and just because he is now a pundit, can still say “we”, and not always, “WE WE” in French, whilst still earning his stripes with the Belgian side, makes me even happier, what I refuse to do, is to fool myself… Read more »

Why not
Reply to  Silky Smooth

Best of luck Freddie. We’re rooting for ya!

Why in world do us fans have to compare Wenger’s accolades or achievements to Mourinho?
You need to have good relations with players who spent most of their careers with their club, it’s not possible if you’re disrespecting Casillas at RM, lampard and Cech, at Chelsea, and player like Schweini at Manu.
“In Arsenal we trust”

Very intelligent guy. Good to see he is in the coaching setup!

“My vision is I want to go as far I possibly can. But I’m trying to earn my stripes and do it the right way.”

Is that a cheeky dig at Thierry? It will be very interesting to compare how their respective coaching careers pan out.

Its all very good to dream of an old boy eventually assuming the reigns from Wenger but it may not happen in time. Many of the prospects still need a bit of hard experience under the belt. Meanwhile we would do well to consider/keep track of Ron at Everton. He did very well bringing in players on the budget and playing an attractive/effective brand of footy with Soton. He looks like repeating the trick again at Everton (of course very early days) But one to consider who Wenger may feel shares a common ethos in development, is able to cut… Read more »

I would’ve said that, but I’m not sure he’d make the move now. Moshiri has got bucket-loads of money to chuck his way in the form of wages and new signings, they’re probably going to build a new stadium with his cash as well and if he is doing well enough that we would consider him, I’d wager that Everton would be doing pretty well themselves. Someone on here mentioned Philip Cocu a while ago – does anyone have any idea what his style of football/management is? What about Leonardo Jardim? I guess he’d be a bit defensive for the… Read more »

Love the player, love the man. As much as we all want to see Henry and God back at Arsenal coaching, I personally would love to see Freedie and Jens moving up, too.

Fascinating to see how far Freddie goes with his coaching career. I was a massive fan of his in his heyday (and still today), but back then I never pictured him moving in to coaching or managing – he seemed like a person who was more likely to pursue interests outside of football (fashion, brewing lager etc). However having listened to him in interviews recently he comes across as very intelligent and thoughtful non-cliché spouting person, not just in terms of football but generally too (a bit like Arsene in that respect), and I can now certainly see him in… Read more »

From what I know he went into the property business in London and is no doubt financially secure for the rest of his life and beyond. He could retire and life the rest of his days in a state of eternal leisure so hats off for instead dedicating himself to his old club to such a degree.

Plus he loves a good curse word on live telly, which could be quite entertaining.

“So how would you rate your team’s performance in the 7-1 win over Barcelona this evening, Freddie?”

“Well, it was fuckin’ excellent, obviously!”

Like most of our former players of this era, Freddie is a class act- the man took the time after an MLS match I went to, he was visiting with Seattle- to come and shake hands with Gooners and sign autographs. Henry did as well. Wish I could say the same for other big name players from other clubs who come over here…

Wouldn’t it be nice if one day Bergkamp becomes the manager with Ljungberg and Pires as assistant managers. While, Lehmann can either be the head coach / gk coach or the “Football Director”!

Much as I love Freddie, if he tried giving me the hairdryer treatment as my manager, I think I’d just be saying to myself, “All right, calm down Calvin Klein.”

We love you Freddie. We do. Cos your Arsenal through and through.