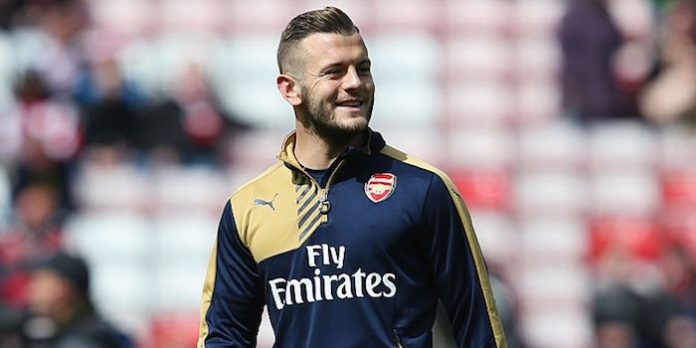 Arsene Wenger has given more detail on his decision to loan Jack Wilshere to Bournemouth, saying he believes it will be a move that could be in the long-term interests of both Arsenal and the midfielder.

There was surprise from many quarters that the Arsenal manager was willing to let him go, but the decision appears to have been made to ensure that his future in North London is as successful as possible – depending on his fitness of course.

“He is not yet completely at his physical level. If you look at the number of games he has played recently in the last six months, you cannot be at the competitive level he wants to be.”

And the Frenchman even tipped him as a possible candidate for the manager’s role at some stage.

“I see him in the future at this club, of course,” he said. “He will spend his life in football, he is a football man. He has an eye on everybody, it’s in him. You either have that or you haven’t, but he is a real football man.

“He has a real football brain and understands football. It’s in his genes. Certainly one day he will be in my seat.”

Wenger expects negotiations over a new contract for Wilshere to take place midway through this season, but again much will depend on how often he can play for Eddie Howe’s side. Further injury absences may well affect that.

“I want him to extend, yes,” he continued. “I don’t know when, I think around December.”

Wilshere’s first Press Conference question as Arsenal manager “So Jack, what do you think of Tottenham?”

It’s simple; Jack does well on loan and he comes back into the team. I get a feeling Ramsey will be leaving sooner than we think. He’s probably looking at bale and thinking he should be in a “big” club like him and be nominated for ballon d orr. So there’s always a place for him on the team.
It’s up to him to go out and prove he is much more than just a name or living off one good season.

I also think Ramsey will be leaving sooner than later, but I wonder what his motivation was for switching his number then? Seems kind of pointless if you’re only going to wear it for a season or two at most.

I agree, Ramsey has always said he’d be open to a move to Spain in interviews.. There’s always been a subtle flirt going on with Barcelona I feel… Anyway, with Wilshere we have a mutual trust existing between club and player, so the loan move to bring his performance levels back to(and surpass) what his potential showed makes so much sense.

I gave you a thumb down because Rambo is already at a “big” club!

Gave you a thumbs down because as much as I love Arsenal, suggesting we’re as big a club as Barcelona, Madrid or Munich is unrealistic.

Just because we’re not as big as the biggest doesn’t mean we’re not big.

We’re one of the top 10 largest sports clubs in the world.

Absolutely. It’s a matter of perspective. We are bigger than most. Perez and Mustafi both mentioned the draw of coming to a big club. There are hundreds of players at clubs like Plymouth, Colchester, Carlisle, Accrington Stanley and Tottenham that can only dream of playing for a club as big as Arsenal.

And of course we’d accept good players from all those clubs except the shit one.

Fuck them. Arsenal is the best, and fuck Barcelona too

The biggest problem with us believing we are a BIG club, up there with Barcelona and Bayern, is that it’s us that believe it. Gooners. We’re biased. It’s not what the majority of top players in the world think, and they are the ones who matter when it comes to joining a new club. I don’t say that we can’t sign occasional top players (Ozil, Sanchez – both coming as much for Wenger as for Arsenal, possibly), but we don’t have the pulling power with the players yet. If they give Arsenal any thought (except when they play against us)… Read more »

why does he come up with rubbish like this?

Still, seeing jack in that shirt is quite a weird sight. Hope he florish and get plenty of playing time stays fit and get nominated player of the year then comes back

Wenger has gone into overdrive regarding Wilshere here. Further proof it was Jack that asked for the loan.

I’m a bit scared Jack will leave us Tbh. I know we joke about his injuries, but it would be gutting seeing him do well for another club.

Just to expand a bit, Wenger only talks about players like this when they hint they want to leave. Signs aren’t looking good. Look at his comments about Gnabry.

Pretty much spot on with Wengers comments, the more he talks about how he wants someone to stay the more likely it is they will leave

Haha, normally I’d 100% agree but Jack a little different. He has Arsenal DNA.

JW has been at The Arsenal since he was 9. He’s not going anywhere

He’s already gone. That’s what the whole article is about.

Off topic so I have to apologise, but can any spanish gunners recommend a place to watch the game in Zaragoza? I’m out there for the next 6 months and it would be nice to find some people with taste when it comes to football clubs!

I sincerely hope he ends his career at arsenal. I just hope that isn’t in a couple of years time lol

This is just my take, and it’s a guess at that, but I don’t see the fuss with Jack leaving on loan to Bournemouth. I’m of the opinion that AW, and Jack himself, would like to see him play 36+ games this season. But by not playing for Arsenal, Jack will have an opportunity to play with his head, rather than his heart – which I’m sure he has said in the past is sometimes responsible for his injuries. I seem to remember hearing something about him having a high pain threshold and playing through injuries that he should rest,… Read more »

I like this idea. Hopefully Eddie “Master” Howe will be able to teach Jack to control his reckless side, and help him quit smoking at the same time. I’d give him carte blanche if he felt he could do all that. Yoga, Tai Chi, Electrodes to the goolies, whatever it takes to send him back to us full of power, determination and controlled lethal aggression. And Hate. Hate for all things T*tt*h*m. It always worked for Sylvester Stallone.

Wenger is way over the top in his praise for Wilshere like he is with the other British players. Sad to see these guys given every opportunity and all the praise while a young talent like Campbell is unjustifiably treated as second-rate.

I’m glad Wilshere is on loan as I wouldn’t put it past Wenger to shoehorn him into the side to the detriment of the balance of the team – he’s done it before.

Cheer up mate. Its not all bad. You could be a Sp*rs fan.

Find me another manager that would say they just want their players to play in order to express their talent. I love Wenger forever.

I hope Jack stays for life and believe he will. I also hope Wenger signs for another 10 years. Not trying to make an incendiary comment but the Wenger out brigade are an utter embarrassment. I stumbled across a video where some deluded berk who believes his opinion is valued was obnoxiously shooting down a true supporter and despite his enthusiasm and vigour, the only points he could muster were the same old short-sighted gobbledygook I’m frankly sick to my guts of hearing. Social media has done many great things but I really wish people had evolved with a bit… Read more »

I don’t think Wenger necessarily meant The Arsenal managers job when he said “certainly he will be in my seat one day”, more that Jack will move into management/coaching one day