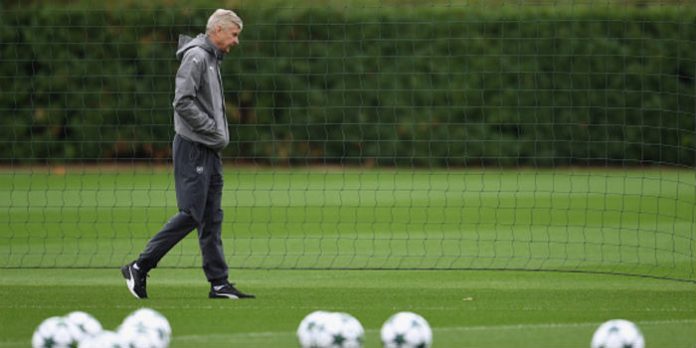 Paris-based company Natural Grass has revealed in a press release that Arsenal installed an ‘AirFibr’ pitch at London Colney in April.

The hybrid grass technology, composed of a 100% natural grass rooted in a patented rootzone made up of synthetic microfibres, cork granules and fine sand, was given the green light after a two-year test on a goalkeeper training area.

Natural Grass claim that their AirFibr grass reduces the risk of injuries among players by up to 40% and is proven to be softer for players returning from existing injuries. We’re not quite sure how they came up with that figure, but they claim it’s verified by Prof. P. Rouch from the Arts & Metiers ParisTech biomechanics Laboratory.

Presumably it relates to specific types of injury…either way, it’s interesting that we’re revisiting our playing and training pitch situation. It has long been speculated that ‘hard’ surfaces could be a factor in our historically bad injury record.

Back in February 2015, it was revealed Andries Jonker had been testing other hybrid grass surfaces with a view to making a purchase for the Hale End youth academy facilities.

This is one of those times I can’t tell if it’s a real article or if Arseblog News Hound is pulling one over us again….

Google Ian Wright talking about England players.
When they were training at Colney they were complaining about the hard surface and I have been commenting about the new pitches (stadium and training ground) from time to time. People may have thought “this guy needs a tinfoil hat”
This time of the season we normally have a few long term injuries to contend with and I don’t see this pattern repeating this season.
Long may it continue

Heh, Uncanny turn of phrase! Was just saying to my coworker that this is interesting news to the Tin Hat Crowd (myself included) given the commentators’ and players’ comments about the firm pitch, and given I’m told they had an identical one at Colney.

What about the padded walls?

Medicinal grass. It’s what we’re smoking over here at the Emirates.

Once I saw the title, I had to check to confirm it isn’t 1st April today ??

Fuckin’ April Fools articles get me every time.

I was on the Emirates tour with Lee Dixon a couple of weeks ago, he reckons that the pitches aren’t talked about nearly enough as a cause of our injuries. Glad to see something’s being done about it at the training ground.

So if your tour was only 2 weeks ago seems strange that Lee Dixon didn’t mention they’d had this new surface laid earlier in the year.. .. or maybe he was not aware of this?

He was talking about the pitch at the Emirates, seems this injury-reducing pitch is only at London Colney.

I know it’s off-topic but I’ve just seen two pictures which gave me contrasting emotions: 1) Phil Collins with a black eye on the front cover of the Evening Standard. Article says he fell. We all know Blogs finally got to land a haymaker! 2) Justin Bieber holding up Ozil’s shirt while Ozil held a t-shirt marketing Bieber’s tour. Made me physically sick. Judging by the look on Ozil’s face, him too! The little brat turned up and played football at my old school last week and now he dares to hold Ozil’s shirt. Blogs – I’m gonna need to… Read more »

Yeah, but notice Ozil gave him the ugly away shirt from last season. Played.

Well we know running on concrete is bad for your body because the surface does not give in but just offer hard impacts that shoot jolts up through your body with every step, and we counter this by using running shoes with built in dampening to simulate a softer grass surface.

So make sense to look into the surface, and football shoes are not particularly dampening either, atleast not the cheaper ones I use 😛

Waterbeds instead of comunual baths next?

We used to have Desso Grassmaster pitches at Colney prior to this season. It is a hybrid grass pitch and is used by almost all the top clubs across Europe.

Currently, even the Emirates surface is a desso surface. The article mentions only Colney pitches being revamped. So the Emirates is still a desso grassmaster pitch.

Surprised to see this change. The desso pitches have been praised over the years.

will
Reply to  Pigeon Superstitions

So weird that the Emirates Cup was cancelled for pitch work, there seems to be no mention of Arsenal on here http://www.dessosports.com/sports/football/football-projects
….and yet surely we’d have heard if the stadium had been changed right? I guess the work was done under the pitch if this is as recent as it seems?http://www.abb.co.uk/cawp/seitp202/c692c94270f6b8fbc1257420004cfae1.aspx

will
Reply to  will

Strange that he article references West Ham as they have literally just had desso grass master pitches laid at their training ground in Romford. I was there for work in the last 2 weeks and saw them being laid. Maybe they have some of both type?

Just looked up Desso, that does seem to be a grass mix only and nothing to do with what’s beneath. Thus the two would not be mutually exclusive as the Airfibr subsurface blurb also doesn’t specify the type of grass on top.

Pitch type (along with even weather) is a factor for injuries, but of the numerous variables, it’s still a small aspect. I would still say chronic training loads and fatigue management are the biggest variables (hey lack of squad rotation).

Still, small margins and all that. All adds up to a big margin.

I heard that Arsenal was the only club in UK to have a specific type of combination of pitches at training and Emirates, I’m not just referring to the grass, but everything underneath, before the beginning of the season the whole lot was ripped up and replaced, so far the only injury is rambo.

Silly us, using that injury increasing pitch the last decade!

Wonder, when they gona come up with chance utilisation enhancement pitch 😀

All I can vouch for is that Arts & Métiers is a high end, proper engineering school in Paris – not one good maths students attend just to get into banking.

Patricia Rouch is a professor at the university so this could be legit.
I may be lying about this…

This made me laugh embarrassingly way more than people who think they know me would assume.

Really good weekend. Manchester City, Tottenham, Everton, Manchester United, and Liverpool all dropped 2 points to us. IMO, better than any one of them winning.

I’m not a grass expert, but I play one on TV. And I smoke a lot of grass. I can tell you that in my expert opinion, DAT SHIT IS SOFT. I can confirm that it will reduce injuries by up to 40%*.

Down with this sort of thing.

what next ?
Witchcraft ?
fuckin HOBBITS ?
or unicorn stuff.!

Mpls
Reply to  Down with this sort of thing.

Only if the Hobbits consent and are of legal age.

Grab ’em by the Hobbit pussy, I say.

welcome, to the Rootzone

“either way, it’s interesting that we’re revisiting our playing and training pitch situation. ”

LoL. What did you assume? Arsenal staff only do podcasts and blogs and complains all the time? Instead of analysing the problem from all the angles? Instead of thinking creative solutions?

Time to give Debuchy a run out……much maligned individual that he is!