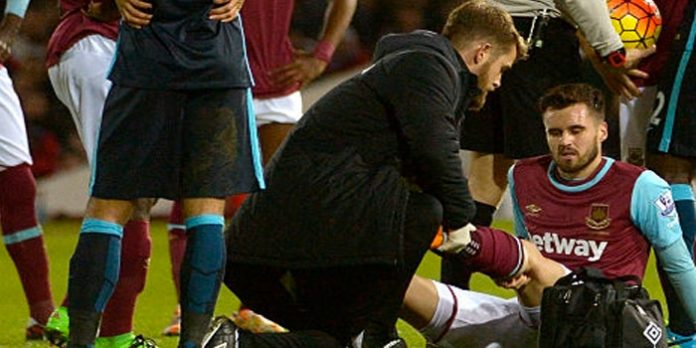 Carl Jenkinson is on the way back from a serious knee injury sustained while on loan at West Ham last season, and says that he misses matchdays the most.

The right-back tore his cruciate ligament and has been out of action for most of 2016, but is now back in the fold training with the club he supports.

He told Arsenal Player about his recovery, saying, “It’s going well, it’s just lovely to be back out there playing and training. It’s fantastic to be doing that again after so long out.

“You have good days and bad days because obviously you’re still adapting after such a long time. It is a humbling experience being injured for such a long period of time.

“I guess sometimes in your career when you haven’t had injuries for a while, you start to take for granted just being able to go out and play football and enjoy doing that.

And asked about what he missed most, he continued, “Matchdays I miss a lot. I have missed them a lot because it’s a sort of buzz and excitement that you can’t replicate in anything else in life really.”

And in typical style, he was welcomed back to work with some good old fashioned banter.

“It was amazing,” he said. “First day back and the lads have all got their banter caps on, dishing out the banter like school dinners.

“I came into the dressing room expecting to get bantered off, but they bantered me right up the yahoo. If it was a mountain it would have been Bantz Everest, or Kilibantjaro.

“Joke was on them though. I’ve had all this free time to work on my own banter, so I hit them with a multi-faceted Bantattack I’d been working on in front of my mirror at home. You should have seen the Ox, I banterised him so bad.

“All he could say was ‘Mate, if your banter was a weapon, it could take down entire cities. I know when I’ve been out-bantered by the ArchDuke of Banter’.

“He gave me a lift home afterwards, to be fair.”

Go, Corporal Jenks! Can’t wait to see him back in action.

At first believed it, then midway through I wasn’t like this has to be fake. But with no clear indication it is at the end, I’m no so sure.

He should unleash his bantattack on Maureen and the utd bunch after we defeat them in November. Maybe also punch him in the face as a bonus.

Who thumbed this down? Is that you, Maureen?

A punch to the face is not enough. More is required.

He has to break Moronho’s face.

Touching interview with The Ox about Jenks and his recovery:
http://www.arsenal.com/news/news-archive/20161005/-how-i-helped-jenko-through-tough-times-

Really happy for Corporal Jenko! Proper Gooner who’s living our dream of pulling on that shirt. Arseblog please post an article on what Gazidis said. Would appreciate it.

I bet his fave Andrew Lloyd Webber musical is Banter Of The Opera. His best Jake Thackray song must be Banter Cock. I also assume he reckons Duncan Bantertyne is a cock.

“He gave me a lift home after, to be fair”. Classic.

“…so I hit them with a multi-faceted Bantattack I’d been working on in front of my mirror at home. You should have seen the Ox, I banterised him so bad.” Masterpiece!

And some folks still can’t figure out why I’m so addicted to Arseblog!

Ivan is no hot chick…