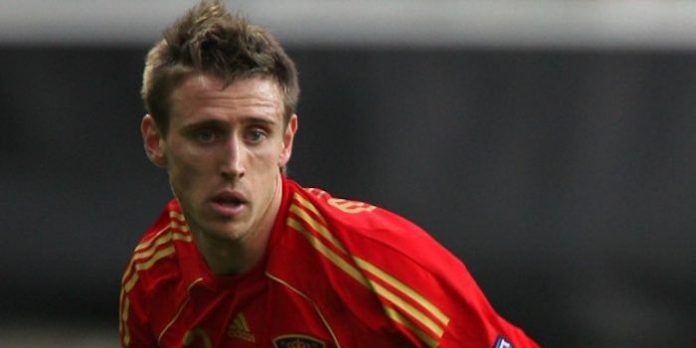 Nacho Monreal has been called into the Spanish squad for the injured Jordi Alba.

The Barcelona left-back suffered an injury during Spain’s 1-1 draw with Italy last night, and the Arsenal man is in line to win his first international cap since 2013.

The 30 year old hasn’t added to his 16 appearances for the Spanish national side despite being one of the most consistent Premier League performers for the last 18 months.

This call up is just reward for that, and he is currently the only Arsenal man in the squad.

Hector Bellerin is currently with the Spain U21s, while Santi Cazorla has yet to force his way back into the reckoning, having missed much of last season with knee and Achilles injuries.

Spain face Albania away from home on Sunday.

Cazorla: I would love to go back to Arsenal

Monreal: Being at Arsenal was wonderful

Congrats Nacho for forcing his way back into the Spanish national team. He deserves his call-up after playing eye-catching football for some time now.

To think that Nacho was just interviewed on his ‘relaxing’ summer on the official site after missing out on the Euros. Congrats on his marriage too btw.

Good luck Nacho, hope being the last member of the squad doesn’t mean you have to bunk with Diego Costa.

Well done and fully deserved Nacho, but can’t believe that Santi is not in the squad…

Which, from an Arsenal point of view is a good thing, but personally he must be really disappointed.

Santi? Disappointed? You mean like not smiling? Don’t think so.

Correct. If you play for arsenal it’s you natural right to play for your national team, that’s given. But i hate it when they play spain! If they do well, before you know it, they are forcing the fucking barcelona shirt on him. First step to being a traitor. For now we should be glad they leave them out. The finals of the world cup and European championship is a different matter because they have plenty of time to recover.

Nacho doesn’t showboat or play most of the game in the opposition penalty area, so Barca likely wouldn’t be interested in a player who actually plays his position.

Great news for Nacho, well deserved. There is huge competition in the Spain squad so he should be delighted with the call up. Definitely the best LB in the league..

First they took our right back to play in an Under 21 game. Now they all of a sudden want our left back too..
There has got to be surely some kind of a consipiracy behind this.
Take our players only for the main events like the World Cup final or the Eruo final and leave them alone during the qualifiers, Please.

Nacho, the silent achiever, I wish all the best, come back clean.

Well in lad. We all knew he was trying to force his way into contention for the euros and didnt get what he deserved after a great season. Hopefully he comes back buzzin and ready to put in more shifts.

One of the most underrated players in the team.much deserved

Great news for Nacho. I hope he gets a good hour on the pitch before coming back perfectly fit.

Brilliant. Well chuffed for him.

Yet another ‘mystery signing’ by the gaffer that has elevated himself.

Some people will harp on about how players come to Arsenal and get corrupted.

The woolly headed thinking by some segments of the fan base defies belief!:I