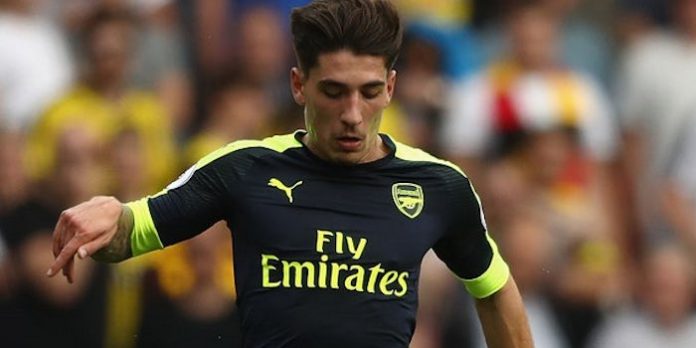 Some worrying news emerging from Spain as, via Sport Witness, Marca report that Hector Bellerin was forced off in the final few minutes of Spain U21’s 3-0 win over San Marino with an ankle injury.

They say, “Hector Bellerin left the pitch in the last few minutes … after suffering a hard tackle to the right ankle, and is waiting for tests to determine the extent of the injury.

“The Arsenal player did not train yesterday with his teammates as matter of precaution.”

Now, Marca seem to be the only ones running with the story. There’s no mention of the injury in the official report on the Spain U21s website, and no record of him going off.

However, that is probably because Spain had used all three subs, so Bellerin went off and was not replaced.

Fingers crossed it’s nothing too serious as the right-back has been in flying form for Arsenal so far this season, an ever-present in the Premier League too, and with back-up in short supply at the moment it’d be a blow if he was forced to miss games.

For more on Bellerin today’s Arseblog on why his contract extension is just as important as Ozil and Alexis.

fingers crossed he recovers as fast as he runs

You jinxed him blogs!

Hope he is rested for the other game even if he hasn’t injured himself :3

Fucking it had to be.. Wasn’t it?
Why do these fucking cursed International break even happen?
No one even gives a rats ass anyway!
That too in a fucking U-21 match?
The guy deserves better.
You guys better return back our Hector, Hale and Healthy.
We warn you.

Why is he even playing for the u21s?! He’s proved he can cut it at senior level in one of the most competitive leagues in the world, and yet these useless u21 coaches continue using talented players in pointless competitions and exposing them to unnecessary risk. So damn stupid.

juanfran and carvajal ahead of him currently. would love to see hector in the spain first team once juanfran gets a bit older.

No one gives a fuck. If he’s third in the pecking order, then he should not play at all if the first two are available. U21 should be for players below the senior level.

Blooda del hellos I hope he gets well quick and it’s nothing major. This is why I’m always happy when players don’t get select for these games.

Why the fuck does he need to play a u21 game against a bunch of plumbers and roof tilers????????????????
Barcelona conspiracy trying to get him with their barcelona youthlings to tell him about how great it is at barcelona and how his dna should be all over their faces. fu barca.

so if he dont make the swansea game who plays right back ? Debuchy, Ramsey, the coq or Holding

Surely a defender and not someone injured like Ramsey. Gabriel has played fullback before. Though sounds like Debuchy to me, though v nervous of him.

Or Maitland-Niles, Looked good against Forest. Probably a bit too early for him though

Actually it will be Holding!

Mustard @ RB and holding at CB could also work

I reckon I’ll call him Mustard from now on. He looks mustard. So why not.

One of the the best RB’s in the Premier League is playing for Spain’s u21 side… Hector has some great character, destined to be a legend at The Arsenal.

maitland niles. why not?

I guess our next game is gonna be Mustafi on the right back and Holding on the Center back…I seriously hope Bellerin’s injury is just a minor one.

Why not just play Holding at RB? He has done so before for Bolton. OK, it might make us a bit more defensive rather than attacking, but I’d rather keep the two CBs together if Hector can’t play.

I guess another alternative would be Gabriel in the middle and Mustafi at full-back as well, but again, I’d prefer not to change the CBs around.

That would suck. On a side note, Blogs, your form has “dramatically improved recently, keep it up”. My personal favourites from today: grant holt and cake, lidl ibrahimovich and billy whizz on whizz. Simple but brilliant 🙂

Why on earth is he playing against San Marino??

If bellerin can’t make it for Swansea game, do you think mustafi covers right back and gabriel as centre back?

This is not gona go down well here but in my opinion Bellerin has not hit anywhere near the heights of his excellent form when coming into the team. He seems to be quite ponderous on the ball and can be caught out of position quite a bit (obviously has the pace to get him put of trouble). His crossing has also been quite poor for a long time. I love Bellerin, and maybe because of the standards he set when coming into the team, im judging him too harshly, but would love to see what others thought.

I think you need to factor in the players he is passing/crossing to in the box to be fair. He isn’t the best “swing it in from out wide” crosser, sure. But he is capable of those sublime first time balls along the ground that have defences in fits (see Chelsea game).

Clearly this is all part of Barcelona’s sly scheme to keep Bellerin in Spain “for recovery”
Who knows what those guys are scheming, get well soon presents arriving at his doorstep, signed by Barca team and staff and what not
?

We can calm down now.

alex
Reply to  That Guy

Thanks to greedy, corrupted fifa that all these intl. matches exist which nobody gives a f.ck about! Who would play as rb if needed, Debuchy, or is Jenkinson available already?