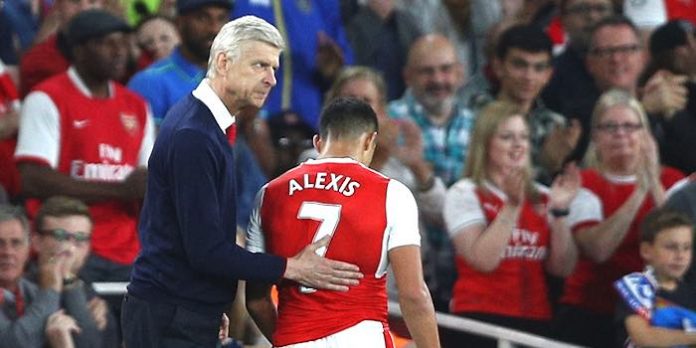 Arsene Wenger says he’ll continue to substitute Alexis Sanchez throughout the season, even if the Chilean always looks distinctly unimpressed when it happens.

The Arsenal manager says that Sanchez isn’t any different from any other player, saying they all want to play when the game is going on but afterwards understand the decisions he makes.

Speaking ahead of tomorrow’s game against Sunderland, he said, “When I decide to take him off, I take him off.

“There is no special case. He has his own character but he is not treated differently from everybody else.

“They all recognise after the game but during the game they want to stay on the pitch. I have played football – you want to play even when you are tired.”

The manager also has to consider whether or not to bring Olivier Giroud back into the team for the trip to the Stadium of Light, but knows that Alexis is the only one who can play from a wide position.

“Giroud and Sanchez are completely different, but they can as well play together,” he said.

“I have to move Alexis out as I always have that problem with Mesut Ozil being behind the striker, he can not move much deeper.

“As much deeper you need defensively to work. So one will have to move wide. And if you move one of them wide, it can only be Alexis.

If Walcott is injured I can see Giroud coming back in for this game would have loved to see Perez get a start though, pity. Ox has been playing well recently but his compatibility with the other three may be an issue.

I agree. For me, I would rest Iwobi this game as he’s played a lot of football and his last couple of performances have been up and down. So I’d give the Ox a start on the left to see how he does. It will be interesting to see whether Ramsey gets a game in the middle too. Although I do think Arsene will still with Elneny and Francis in CM considering Xhaka is still banned. Really hope we get the win today as we have a couple of big games on the horizon, so we really need to take… Read more »

Haha Android in bed here. Just before putting my phone away and sleeping, just wanted to check if any updates or news

I can’t imagine either of you will have any trouble sleeping after that exchange….

Did you slap your flute on any taxi’s last night Nicky?

I can’t wait to see Giroud upfront since We will be playing 10man behind the ball… We need a body right there in The Moyes Box.. And The French Gunner Will be instrumental

I think The Ox has earnt a starting place should Theo not be available – it would be unfair on The Ox if he was shunned for Giroud, considering Giroud hasn’t been available for a while.

Or we could start with both giroud and ox to let iwobi have a rest after the midweek.

Fancy the Ox to start and bag another brace.
I want his future to be with us, he needs an injury free run.

Need Alexis to start through the center. He is much more difficult for defenders to mark. And Giroud is much more static. But definitely bring on the Frenchman later on. He holds the ball well and defends well on corners.
This game will not be easy. That’s for sure.

Not sure why players can’t just take the fact that they’re being substituted and with good grace.

The team should always come first and sometimes that means hauling your ass off the park.

Yes, but I guess the reason some players are grumpy when they’re hauled off, is because in their mind they don’t accept that this is in the best interest of the team.

So Alexis can be taken off even if he’s not happy about it? But it seems to me that he insists on playing, even against the manager’s better judgment. So on such occasions he’s treated differently from other players?

“but, but, I get bored when I’m not buzzing around”