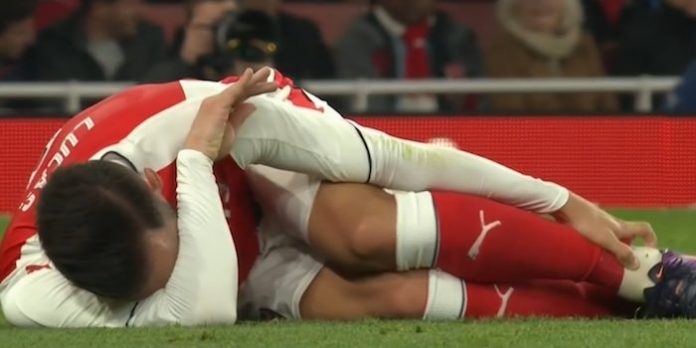 After Arsene Wenger confirmed that Lucas Perez would miss 6-8 weeks with an ankle injury, he expressed his frustration at the tackle that injured the Spanish striker.

The foul by Reading substitute Danzell Gravenberch left the 28 year old in a heap on the pitch, and although he tried to carry on he soon had to give way.

It left the Arsenal manager an unhappy figure in his press conference today when asked about the challenge.

“It’s very frustrating” he said. “He worked very hard to get and now he’s close … he’s of course absolutely gutted. It’s an injury from nowhere, and a stupid one because it was a kick … a deliberate kick.

“It’s a similar tackle to the one that Xhaka committed, but there was no red card. Anyway, the red card would not have helped Perez.

Pressed further on Gravenberch’s tackle, the manager was a bit more sanguine.

“It was not needed,” he said, “but it was a frustrated reaction from the player. He had no chance to get the ball like that, but you have to deal with it. Sometimes you get away with it, sometimes you get a bad injury.

“In this case it’s unfortunate.”

Strange to compare it to Xhaka’s. Both definitely deliberate and with no chance of getting the ball, but one was just a trip

Why not
Reply to  THEEEEO

I think he was refering more to the red card being given for something of a similar yet less agressive sitiuation.

The referees are shit.

Ross
Reply to  Why not

Yeah, Since ‘Moss’ got demoted to the championship for a game for the Xhaka mistake, I doubt any other ref will fuck up like that again for a while.

So Moss gets demoted for his error. But the red card he gave still stands. Then a thug tries to finish Perez career. No punishment. At the time or after…
My head hurts.

The comparison to Xhaka’s challenge highlights the issue.

Lucas seems to be the kind of man who will come back stronger. All going well, he could come back in time to make a big difference during the ever-tricky end of December.

Actually it’s much more dangerous to kick the leg someone is standing on than the on in the air like Xhaka did, even if his foul was way more aggressive.

Players like Gravenberch have no talent whatsoever and they only hurt good players to compensate for their lack of talent. You see this week in week out and it only goes to show they have no skill but to severely injure a better player. A good example is Abou Diaby whose great career was cut short by a talentless player. They need more than a Red card.

I think, as fans, we’re used to seeing our team kicked with impunity. Think Paddy Mcnair on Wilshere or that Stoke cunt that knackered Debuchy deliberately.

But heaven forbid we try and kick back eh….ffs.

If Arsene picked me, I’d take out Shawcross, Taylor, Smith, McNair, Gravenshit without even thinking about it. Then I’d go in front of the media and say “I’m really not that type of player”.

He lives his mum blah blah blah. We always hear the same shit. None of the authorities want to make the obvious link that English football is almost all about physicality. Otherwise how would the talentless lumpen oafs mentioned above get through the net? The sooner we stop simply picking the biggest kid in the playground the better for English football.

And why haven’t you mentioned Terry or MaureenO????????

Xhaka had a slight touch on the guy’s shin pad just to bring him down and stop the play, no intentions to injure the player , while this guy stamped on Lucas’s ankle.

There are two issues: one is how much contact there was (and I’d say Xhaka had more than a “slight touch”, but it was hardly violent, and nothing compared to the stamp on Lucas), the other is the intent: clearly, everyone in the stadium could see that Xhaka just wanted to foul the guy to stop the counter, whereas there was literally NO FOOTBALLING REASON to stamp on Lucas like that!!! He may have kinda/sorta gone for the ball, but it was so clumsy that he can’t possibly plead innocence on those grounds. In real time from the normal camera… Read more »

Something has to be done to stop this kind of recklessness by untalented players. I’m reminded of the assaults on Diaby, Eduardo, and Ramsey, but also–just to underline this isn’t all about Arsenal players–of the foul (in a French league cup game, I believe, against a smaller team) committed against Falcao a few years back: he was one of the best players in the world at the time, and in one moment he was robbed of the chance to go to the World Cup in his prime, in which he likely would have starred (a very good Colombia side could… Read more »

Gravencunt had no reason to tackle perez. the arsenal man was moving away from Reading’s box. I mean, it was not like perez was even threatening to score or something. in contrast, Barrow, the swansea player, was bearing menacingly on the arsenal’s left flank. Xhaka’s foul prevented a potential 4 on two.

Mpls
Reply to  Waitina from Nairobi

And to add to that, Xhaka easily could have stamped is studs on the player’s ankle and achilles, but, He Didn’t! Because he’s NOT that sort of player!

Whatever-his-name-is from that shit team intended to take aggression on Lucas. You don’t “Accidentally” put your cleats on someone’s ankle when you’re that far from the ball. That is grounds for a ban.

Sammy
Reply to  Waitina from Nairobi

Which is why Giroud is still very much relevant. All those who say he is Plan B are completely wrong. Giroud provides a different threat and set up to Alexis but we need BOTH approaches. Sometimes you just have to barge down the door. Giroud almost nicked a goal courtesy of an Elneny deliveryerves to illustrate the direct threat he can bring closer to box if the opposition sit too deep. Also some very good lay offs from the big man. With Santi still out and Walcott now doubtful, it serves to illustrate why we need everyone to be firing… Read more »

Watched the oaf literally commit assault and shouted ‘RED’!!…..only to see the ref keep his hands in the open. Was even surprised to see Lucas get back up to play……could have sworn i saw the ankle cave in.
Couldn’t believe the injustice of it all especially after having watched Xhaka get a straight red for an obvious professional foul.
Like someone said up there, a ban corresponding to the duration the victim of a malicious/uprofessional foul stays out would deter against these crimes.